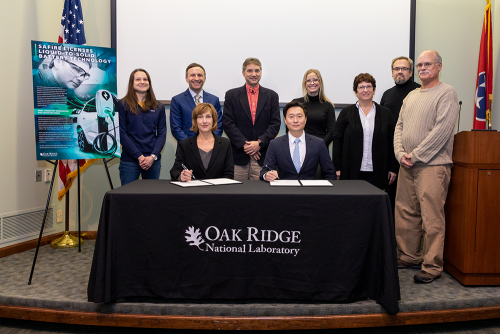 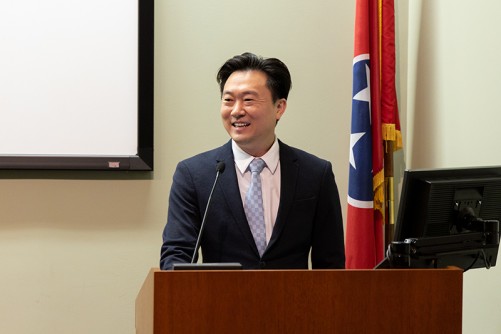 John Lee, co-founder and chief executive officer of Safire, addresses attendees of a licensing event at ORNL on Nov. 15.

Newswise — The Department of Energy’s Oak Ridge National Laboratory has exclusively licensed battery electrolyte technology to Safire Technology Group. The collection of five patented technologies are designed for a drop-in additive for lithium-ion batteries that prevents explosions and fire from impact.

The potential for battery cells to catch fire or explode when impacted — such as in a car crash — and cause property loss, serious injuries or deaths is a major challenge in the adoption of battery technology for electric vehicles and aircraft, such as unmanned aerial vehicles. ORNL’s Safe Impact Resistant Electrolyte, or SAFIRE, technology removes this risk through a new electrolyte formulation that changes from liquid to solid upon impact.

In a lithium-ion battery, a thin piece of plastic separates the two electrodes. If the battery is damaged and the plastic layer fails, the electrodes can come into contact and cause the battery's liquid electrolyte to catch fire. In SAFIRE, the electrolyte solidifies under impact, blocking contact between electrodes.

The technology can significantly reduce vehicle weight and increase range by removing the need for heavy protective shielding around the battery.

“SAFIRE will transform the car industry, particularly as we pivot towards electric vehicles,” said John Lee, co-founder and chief executive officer of Safire. “The additive is easy to incorporate into existing battery-making processes and provides users with a safer alternative that is lighter and more effective than conventional battery protection, resulting in higher performance and lower total cost of ownership.”

In defense applications, the technology provides projectile and ballistic protection while reducing the weight of defense systems and equipment.

Lee and Mike Grubbs, Safire’s other co-founder, are also partnering with government agencies and industry to develop the technology for electric vertical takeoff and landing, or eVTOL, aircraft, e-bikes and other Li-ion-powered equipment.

“This announcement further strengthens our long-term collaboration with ORNL and allows us to begin commercial testing,” Grubbs said during a Nov. 15 licensing event at ORNL. “We are also exploring new partnerships and identifying prototyping opportunities with automotive, e-bike and eVTOL manufacturers.”

ORNL’s Gabriel Veith, the inventor of SAFIRE, has been working to develop and refine the battery technology since 2014. Veith has been named in two R&D 100 Awards, including one for SAFIRE. The development team also includes ORNL colleagues Beth Armstrong, Hsin Wang, Sergiy Kalnaus, Katie Browning and Kevin Cooley.

“The best part of working at ORNL is the team environment. This team has a rheologist, a ceramicist, an electrochemist, mechanics experts, materials testers — all those together make this technology work,” Veith said. “This is not the work of a single person — teamwork allowed us this really unique opportunity. Having a diversity of people, experiences and backgrounds really helps to develop ideas.”

Safire plans to start developing prototypes with strategic partners. Parties interested in testing the technology or partnering with Safire should email [email protected].