Look, up in the sky! High school interns develop a device that levitates droplets of water 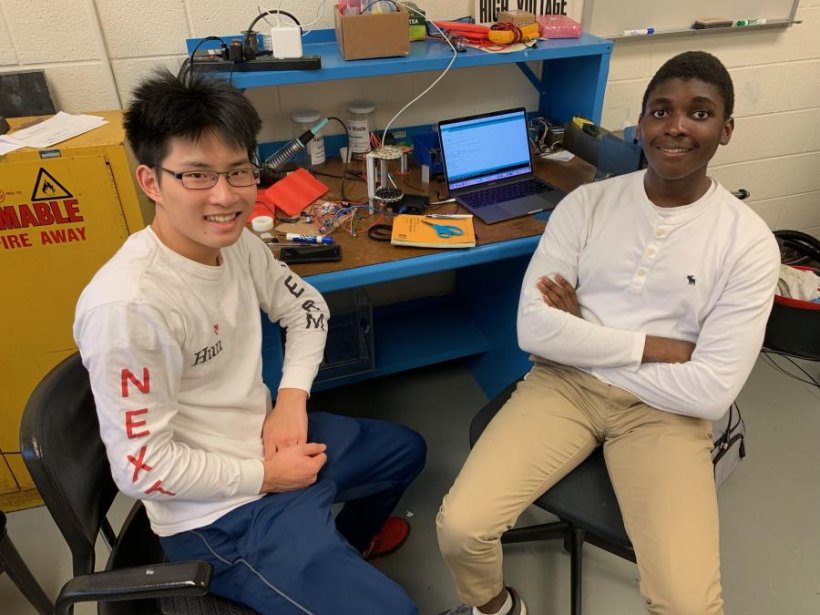 Building a levitator: Alex Ni, left, and Remy Plattiers, with the levitator beside the computer behind them.

Alex Ni shows the magnets that he programmed for the laser interlock system in the Laboratory for Plasma Nanosynthesis. When the curtains are open the laser cannot operate.

Newswise — Among the many projects that interns worked on this summer at the U.S. Department of Energy’s (DOE) Princeton Plasma Physics Laboratory (PPPL) is an acoustical levitator that causes droplets of water to levitate in mid-air so their interaction with plasma can be examined. Assembled by Remy Plattiers, now a freshman at the University of New Haven, the device suspends droplets with sound waves whose high frequency is hard to hear.

“This has really been fun,” said Plattiers, a June graduate of New Brunswick High School who worked with physicist Shurik Yatom of the PPPL Department of Plasma Science and Technology. “It was initially difficult” Plattiers said, “but when we got it to operate it was really fun and when I found out how to shift particles up and down that felt cool too.”

Programming the device was Alex Ni, a gold medalist in martial arts who had previously done summer programming at PPPL and now is a senior at the Hun School in Princeton (see below). The two were among 45 interns who worked at PPPL this summer on a variety of projects. (See story here.)

The levitator uses a programmable circuit board, called an Arduino, that generates ultrasonic-frequency waves that are amplified and sent to 72 transducers that produce a standing wave that traps tiny droplets of water in mid-air. Such a device could be used to levitate liquid droplets and study their interaction with plasma, Yatom said.

The levitator came in a kit that Plattiers put together with soldering help from Nirbhav Chopra, a graduate student in the Program in Plasma Physics at PPPL. “I had the kit for half-a-year in a drawer,” said Yatom, “and when Remy came I gave it to him for his project. He was very hands-on building the device and after he built it Alex stepped in to help with the programming.”

Plattiers plans to study mechatronics, a hybrid of mechanical and electrical engineering, at the university. “This project has given me ideas to test when I pursue engineering in school,” he said. “I am having a blast and will definitely come back and work here if I can.”

Meanwhile, Alex Ni has performed and is learning sophisticated programming at the laboratory. He initially reprogrammed the laser interlock, a safety feature that automatically shuts lasers in the PPPL Laboratory for Plasma Nanosynthesis, and has been learning the computer language MatLab to facilitate easier analysis of spectral emission from plasma. “We immediately recognized that he is a very bright kid,” said physicist Yevgeny Raitses, who heads PPPL research activities that include the nanosynthesis laboratory.

Ni’s work on the interlock called for reprogramming the logic pattern of a larger and more powerful Arduino and fixing and modifying some wiring in the interlock circuits. The logic enables the lasers to know when curtains held together by magnets in the nanosynthesis lab are open or closed, and to shut down when the curtains are open.

Ni enjoyed Jackie Chan martial arts movies as a child and became interested in Kung Fu while a first-grader. He practices martial arts up to five hours a day during breaks from school and will compete in Shanghai, China, this October in the World Wushu Championship, a type of martial arts. As with Plattiers, Ni’s summer internship has heightened his interest in science and technology and he looks forward to increasing his knowledge throughout his career.

PPPL, on Princeton University's Forrestal Campus in Plainsboro, N.J., is devoted to creating new knowledge about the physics of plasmas — ultra-hot, charged gases — and to developing practical solutions for the creation of fusion energy. The Laboratory is managed by the University for the U.S. Department of Energy’s Office of Science, which  is the single largest supporter of basic research in the physical sciences in the United States and is working to address some of the most pressing challenges of our time. For more information, visit energy.gov/science (link is external).

Caption: Building a levitator: Alex Ni, left, and Remy Plattiers, with the levitator beside the computer behind them.

Caption: Alex Ni shows the magnets that he programmed for the laser interlock system in the Laboratory for Plasma Nanosynthesis. When the curtains are open the laser cannot operate.