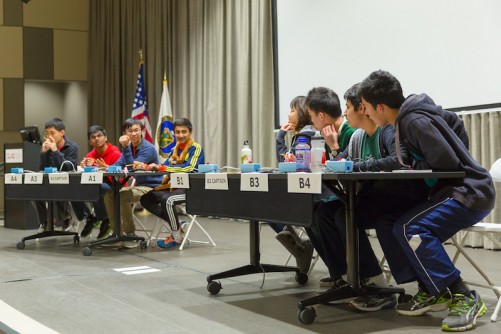 Science Bowl volunteers include SLAC employees, Stanford students and past competitors who act as moderators, judges, timekeepers, scorekeepers and helpers. 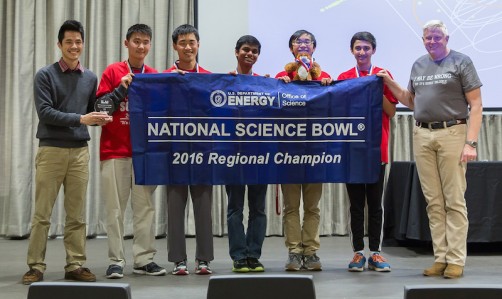 Newswise — At the annual SLAC Regional DOE Science Bowl on Saturday, Lynbrook High School pulled off a repeat performance of their 2015 win, earning a return trip to the National Science Bowl, which will be held in Washington, D.C., April 28 - May 2.

In fact, the playbook was identical to last year’s: The Lynbrook team won its morning round-robin group but lost to The Harker School in the second round of the afternoon matches. Lynbrook then beat Palo Alto High and topped Harker twice for the win.

“It was surreal,” said Pranav Lalgudi, a Lynbrook junior.

The U.S. Department of Energy created the National Science Bowl in 1991 to stimulate interest in science and mathematics. This year, more than 9,000 high school and 4,500 middle school students will compete in 70 high-school and 50 middle-school Science Bowl regionals.

A moderator first reads a tossup question, worth four points, answered by the contestant who buzzes in first. If that answer is correct, the contestant's team can collaborate on a 10-point bonus question, which must be answered in just 20 seconds. If a tossup answer is wrong, the other team can answer it. Contestants who buzz in before the moderator finishes reading a tossup and answer incorrectly incur a 4-point penalty.

Many Science Bowl questions appear to be amazingly complicated or obscure – such as calculating the speed of water flowing from a pipe of a given diameter that would fill a specifically sized bathtub in a certain amount of time, or the properties of materials that clad nuclear reactor fuel rods. But the students, who train for months using practice problem sets and other reference materials, answer them rapidly. More than 1,300 new questions are created each year.

Lynbrook team members said the key to their victory was having higher expectations and working harder and smarter in preparation.

“Another key factor in this team’s success is that our faculty and students are very supportive of Lynbrook's science programs,” said coach Lester Leung.

At each match, the Lynbrook students stayed loose by having one team member wear the “space monkey” mascot they had bought at the Smithsonian Air & Space Museum during last year’s trip to the national competition.

More than 50 volunteers spent their Saturday as moderators, judges, timekeepers, scorekeepers and helpers. Many were SLAC employees; others were Stanford students or former Science Bowl competitors in the area. Volunteer Daniel Shen, a UC-Berkeley freshman, was on the Mira Loma High School team from Sacramento that won the National Science Bowl the last three years.

“Science Bowl taught me the positive effects of teamwork,” Shen said. “The breadth of the subject matter is so large. It would be very difficult for one person to do it all.”

While the competition is fierce, the event is valuable to all who participate.

“We’re grateful for the opportunity to compete,” said Asya Landa, chemistry teacher and longtime coach of the Lincoln High School team from San Francisco, which placed third in 2006. “It inspires our students to strive, as does the afternoon tour of the accelerator.”

“Science is a great adventure,” he told the students. “It’s not only a job, it’s a passion. And I see a lot of passion here.” 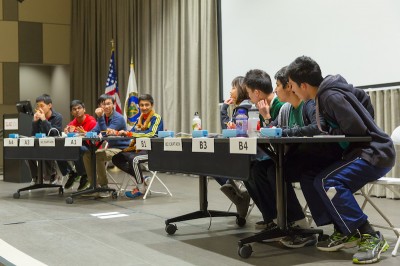 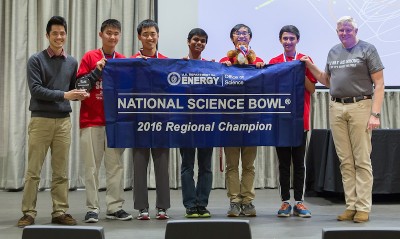