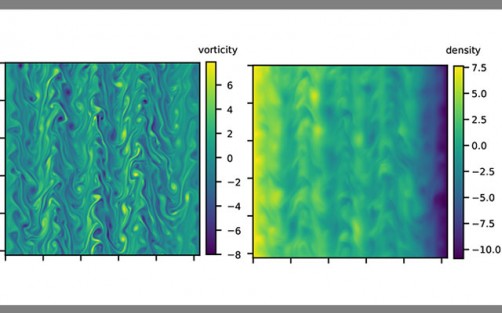 This snapshot of turbulence density and vorticity from a simulation using SDSC’s Comet supercomputer illustrates a notable physics concept: the formation of zonal (i.e. y-direction) structures, which have important consequences for magnetic confinement devices.

Newswise — For more than four decades, UC San Diego Professor of Physics Patrick H. Diamond and his research group have been advancing fundamental concepts in plasma physics, which is an important aspect of furthering advancements in fusion energy. Most recently, Diamond worked with graduate student Robin Heinonen on a model reduction study that used the Comet supercomputer at the San Diego Supercomputer Center at the University of California San Diego to show how machine learning produced a novel model for plasma turbulence.

Diamond and Heinonen say that advances in machine learning, such as new deep learning techniques, have provided them with new tools to better understand the self-organization process that emerges from what the researchers term as a seemingly chaotic process.

“Turbulence and its transport is chaotic in a sense, but this chaos is ordered and constrained,” said Heinonen, who co-authored Turbulence Model Reduction by Deep Learning with Diamond in the academic journal entitled Physical Review E. “Moreover, in certain turbulent systems, the chaos conspires to spontaneously form large, long-lived coherent structures and in many cases,  we only have a tenuous understanding of why and now. There are definitely aspects of structure formation and self-organization which we do understand, but it's still an active area of research.”

Plasmas have many applications, including fusion energy. When light nuclei fuse together, the mass of the products is less than that of the reactants, and the missing mass becomes energy – hence Albert Einstein's famous ‘E=mc2’ equation. In order for this to occur, temperatures must literally reach astronomical levels, such as those found in the Sun’s core. At those temperatures, hydrogen changes from a gas to a plasma, or an extremely high-energy state of matter where electrons separate from their atoms.

As for societal benefits, fusion energy is viewed as a longer-term solution to meeting the world’s overall energy needs as the global population and the resulting demand for electricity increases. Fusion has the capability to provide large-scale, emissions-free energy wherever needed, while being a viable complement to intermittent renewables and battery storage.

Still, some obstacles remain, one of them being how to manage plasma turbulence, which drives the transport of heat and particles toward the wall of the fusion device, preventing adequate confinement. Machine learning has allowed the researchers to better understand one of the issues surrounding the turbulence during transport.

Specifically, Diamond and Heinonen used deep learning to produce a model for turbulent transport. The process makes use of computational models that can automatically learn patterns from data instead of being explicitly programmed. The ‘deep’ in deep learning refers to the many layers of interconnected processing units in the model that allows it to learn representations of the data at multiple and increasingly complex levels of abstraction.

“This deep learning approach allowed us to run many simulations and then train a neural network,” explained Heinonen. “The neural network then outputs the average turbulence-driven fluxes as a function of a handful of physical variables of interest, which reduces the dimensionality of the model from two-dimensional to one-dimensional, making it more tractable and easier to understand.”