Making a One-Way Street for Electricity

Scientists show how a buckyball buffer helps conduct electricity in only one direction, vital for molecule-sized circuits. 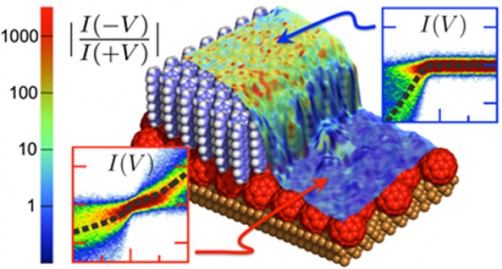 Self-assembled structures, called heterojunctions, contain ordered pentacene molecules (purple) standing upright on buckyballs (red) ordered on a copper surface. The measured map (left) shows the rectification ratio, which is a measure of how much current flows in the forward and reverse directions. The heterojunction has a far better rectification ratio (blue insert – bent line I(V)) measure than the pentacene without the buckyball buffer (red inset left – straight line I(V))

Circuits have become smaller, letting computers fit in the palm of your hand, but what if circuits could be as small as molecules? To create such circuits, scientists need molecular diodes that let current travel in one direction, but not another. Carbon-based diodes show promise, but they are sensitive to their environment. They don’t work well when fit into practical devices. Scientists restructured the diode by separating the electron pipe region, made of a single layer of pentacene, from the metallic electrodes. The buffer is a thin layer of tiny carbon balls, or buckyballs. The new diode is 1,000 times more effective at conducting current in one direction than the other.

The scientists identified the molecular Schottky mechanism that lets the diode conduct electricity in one direction and not the other. This mechanism may prove to be a general feature of such molecular systems, and the ability to engineer it through the addition of a thin layer may have implications for mass-producing molecular-based electronics and innovations in solar cells and certain organic photovoltaics.

More than forty years after the original proposal of organic molecular diodes, the electrical performance of such devices remains several orders of magnitude below their inorganic counterparts. A primary reason is that molecules are very sensitive to their immediate environment, so that much of their desirable intrinsic electrical properties are lost when integrated into actual devices. This work overcomes such problems by decoupling the active device region made of a monolayer of pentacene from the metallic electrodes using a buffer layer made of metallized buckyballs (C60). The inherently weak interactions between C60 and pentacene and the strong coupling of C60 with copper lead to a system reminiscent of a 2-molecule-thick Schottky diode, with a current rectification comparable with the best performers in the field of molecular diodes. These findings open the possibility of engineering non-linear electrical behavior on a nanometer length-scale in organic optoelectronics and photovoltaics. Scanning tunneling microscopy capabilities at the Center for Nanoscale Materials (CNM) with surface preparation under ultrahigh vacuum were critical to building and characterizing these self-assembled systems at the atomic scale. With this structure determined experimentally, calculations on the CNM’s high-performance computing cluster unraveled the electronic structure and transport mechanism of the heterojunction.