Sergei Nagaitsev, director of the Fermilab Accelerator Complex user facility, looks to the future while running the day-to-day duties in support of the Office of Science High Energy Physics program goal - to understand how our universe works at its most fundamental level. 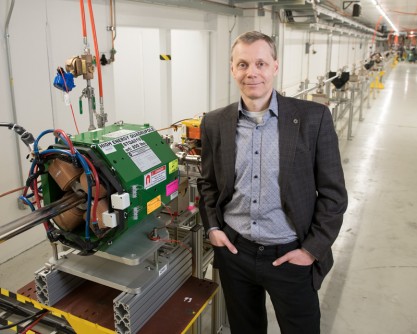 Director Sergei Nagaitsev stands in front of an accelerator beamline under construction at the Fermilab Accelerator Complex.

Newswise — This is a continuing profile series on the directors of the Department of Energy (DOE) Office of Science User Facilities.  These scientists lead a variety of research institutions that provide researchers with the most advanced tools of modern science including accelerators, colliders, supercomputers, light sources and neutron sources, as well as facilities for studying the nano world, the environment, and the atmosphere.

When Sergei Nagaitsev was promoted to lead Fermilab’s Accelerator Complex, a U.S. Department of Energy user facility, his vision was a place where researchers from this country and the world would want to do their experiments. And they do. In 2017 more than 3,000 scientists from 48 countries including the United States came to the Complex to do research. His part in this work carries two titles: Chief Accelerator Officer and Head of Accelerator Division. “The first title is looking outside of Fermilab – talking to funding agencies and people external to Fermilab and thinking about our future accelerator facilities,” Nagaitsev explains. “A division head is someone who is running a shop” – the day-to-day details.

Nagaitsev also holds a part-time appointment as professor of physics at the University of Chicago, which means making time for an hour’s drive from Fermilab to the university campus for meetings with fellow professors, post docs, and students. He values these connections and the opportunities to engage with research projects beyond the laboratory.

He doesn’t remember a specific moment, but “at maybe age 15, I knew I would be a physicist.” Nagaitsev attended the highly-ranked Novosibirsk University in Russia (at that time, a part of the Soviet Union). His freshman physics professor invited him to work in his lab, an invitation with life-changing impact. “He brought me into accelerator science,” says Nagaitsev. “I am still in touch with this professor; we are big friends and talk on the phone nearly every week. He is a very well-known scientist in Russia. He is such an inspiration to me, 81 years old and still active. We ski together on visits.”

A second life-changing offer came from America. A visiting lecturer, a physicist from Indiana University (IU), described the research going on at the university’s cyclotron facility in Bloomington, Ind. and invited Nagaitsev to apply to IU’s graduate school.

After receiving his diploma from Novosibirsk University in 1989, Nagaitsev applied for graduate study at IU. “It wasn’t easy. It was not simple. I had to go to Germany [from Russia] and work first,” he recalls. “[But] nothing of consequence is trivial.”

And in one more life-changing event, in 1995 he was invited to Fermi National Accelerator Laboratory (Fermilab) for a postdoc position. In 2004 he became head of the Recycler Department, was appointed deputy director for the International Linear Collider program in 2005, and Chief Accelerator Officer and Division Head in 2013.

The Fermilab Accelerator Complex is located in Batavia, Ill. on the campus of the Fermi National Accelerator Laboratory. Fermilab’s mission is to understand the fundamental particles that make up our universe and their interactions. At the Accelerator Complex, scientists create and study a spectrum of particles.

“We take ideas for technologies and experiments that have never been done before and convert them into knowledge. We first convert them into data; our researchers from Fermilab and universities and labs around the world go through this data and create knowledge in elementary particle physics. This knowledge is for the benefit of the world—research in particle physics is completely open, published, and available to the public. We also create intellectual property on behalf of the U.S. government,” explains Nagaitsev. “We protect our intellectual property on behalf of taxpayers.”

“We are one of the best particle accelerator facilities. We have strong competition, and the pendulum swings back and forth,” says Nagaitsev. “Our edge right now is in producing neutrinos—we are the only lab to produce neutrino beams at low and high energies, and we have the most powerful high-energy neutrino beam in the world.”

In 2017, the Accelerator Complex had users from 441 institutions – universities, industries, and other laboratories. “Our mission is to conduct elementary particle physics research,” says Nagaitsev. “Our job is to provide facilities and access to beams [of charged particles] for research to international collaborations from around the world.”

Nagaitsev points out the uniqueness of the visiting researchers. “I guess I never call them users; they are colleagues. Maybe the ‘user’ has a special meaning in the DOE lingo, but for me they are peers, colleagues, my fellow scientists who come to Fermilab because of our science of high energy physics, because of the scale of facilities required.”

Particle physicists conceive, design, build, and then run their experiments for years; a typical experiment may last five to 10 years.  “The NOvA experiment – we are now in year three to four; we have some three years to go. Some users drop out, some users are added.”

In addition to his leadership duties, Nagaitsev also makes time to conduct tours. “Fermilab is not the oldest national lab; it was built in 1967 out in the corn field, in the prairie. I think my favorite story about Fermilab has to do with the spirt of the American West. It really has to do with our founding director Bob Wilson being a cowboy at heart; it has to do with us being the pioneers,” says Nagaitsev. “And we have bison too, which helps illustrate the story.

“The facility is one of the most beautiful sites in the DOE national lab complex. I often start my tour at the 15th floor (Wilson Hall)–a really nice view of the lab–and go down to the accelerator facilities.” The campus is unique among the DOE laboratories in that it is open to visitors. The public is welcome to come onsite and take a self-guided tour or use the area for recreation: fishing, jogging, walking dogs during certain hours every day.

To non-scientist guests, “I explain we still do not understand how our universe is made. Here at Fermilab Accelerator Complex we are studying a portion of this puzzle.”

The Deep Underground Neutrino Experiment (DUNE) is an international experiment for neutrino science [SEE “What is a neutrino?”] and proton decay studies hosted by Fermilab. The world’s most intense neutrino beam – to be created at Fermilab – will travel between two detectors: one at Fermilab and the second 800 miles away and deep underground in Lead, South Dakota. Researchers hope to obtain data to answer fundamental questions on the origin of matter, the unification of forces, and black hole formation.

The NOvA project is studying how neutrinos change types as they travel by sending a beam on a 500-mile-long journey from the lab to a detector in Ash River, Minnesota.  Physicists at NOvA hope to determine the hierarchy of masses of the three different neutrino types.

Best advice for a future director at the Fermilab Accelerator Complex: “Best advice for the next director?” muses Nagaitsev. “Blame your predecessor,” he jokes, then continues. “I think that maintaining a tight connection with users, the relationship between the users and the accelerator scientists is really critical. I would give advice to be very much engaged with the users.”

In Fiscal Year 2017, the Fermilab Accelerator Complex and the other user facilities welcomed more than 34,000 researchers – from academic, industry, and government laboratories in all 50 states and the District of Columbia – to perform new scientific research.  For details on the DOE Office of Science User Facilities, go to https://science.energy.gov/user-facilities/.

The Office of Science is the single largest supporter of basic research in the physical sciences in the United States and is working to address some of the most pressing challenges of our time. For more information, please visit https://science.energy.gov.

http://www.fnal.gov/pub/science/particle-physics/experiments/neutrinos.html Trillions of neutrinos pass through our bodies each second without leaving a trace. These tiny particles are nearly massless and neutral, rarely interacting with other matter. Neutrinos were first formed in the first second of the universe and are continually being produced in the nuclear reactions of stars and nuclear power plants. In 1930 Wolfgang Pauli predicted that an unknown particle was responsible for the apparent energy loss during radioactive beta decay. Clyde Cowan and Fred Reines set up an experiment in 1956 that detected this then-unknown particle – the neutrino. We now know neutrinos come in three types or ‘flavors’ and morph into each other. This ‘morphing’ happens as the neutrino travels and adds to our detection and observation challenges.  These particles could be key to a deeper understanding of our universe by showing how the universe works at a basic level.