Ken Andersen is the associate laboratory director of the Spallation Neutron Source and the High Flux Isotope Reactor in Oak Ridge, Tennessee. 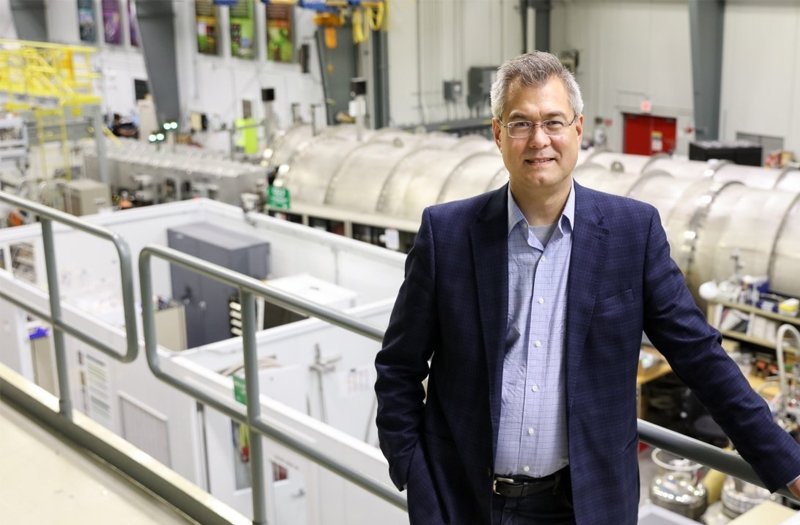 Ken Andersen on the mezzanine overlooking the beam room at the High Flux Isotope Reactor (HFIR). As Associate Laboratory Director for Neutron Sciences at ORNL, Andersen oversees science and operations at both ORNL’s HFIR and the Spallation Neutron Source.

This is a continuing profile series on the directors of the Department of Energy (DOE) Office of Science user facilities. These scientists lead a variety of research institutions that provide researchers with the most advanced tools of modern science including accelerators, colliders, supercomputers, light sources and neutron sources, as well as facilities for studying the nano world, the environment, and the atmosphere.

For nearly 30 years, Ken Andersen has worked at neutron sources around the world. As a scientist, he’s made significant contributions to advancing instrumentation and neutron scattering technologies that enable greater insights into the natural world. Now, he leads two of the world’s most powerful neutron sources for the US Department of Energy—the High Flux Isotope Reactor and the Spallation Neutron Source.

Andersen was chosen as the new Associate Laboratory Director for Neutron Sciences at Oak Ridge National Laboratory (ORNL) in March 2021. He joined ORNL in 2020 as Division Director of Neutron Technologies after spending the previous nine years in Lund, Sweden where he was responsible for developing instruments for the European Spallation Source (ESS), currently being constructed.

“ORNL is a place with an incredibly rich history but also a place with a lot of new exciting things on the horizon,” said Andersen. “My aim is to lead ORNL’s neutron user facilities to the highest possible levels of performance and help increase their scientific impact even further.”

Andersen earned his PhD in physics at Keele University in the UK while also working at the Institut Laue-Langevin (ILL) in France, where he was first introduced to neutron scattering. He next worked as a postdoctoral researcher at the National Laboratory for High Energy Physics in Tsukuba, Japan. It was there that he developed his interest in building neutron scattering instruments.

He returned to ILL as an instrument scientist where he helped develop and improve novel neutron instrument technologies for studying complex magnetic structures. From ILL, he moved back to the UK to work as a staff scientist at the ISIS Neutron and Muon Source at Rutherford Appleton Laboratory. There he had the opportunity to experiment with equipment and explore new and exciting ways to use neutron scattering instruments beyond their intended design specifications. The work aimed to enable advanced techniques on more neutron scattering instruments and extend the benefits of those techniques to study a much wider range of scientific problems.

“In hindsight, it wasn’t realistic at the time, but I chose that instrument project because it really pushed the envelope and I couldn’t help but think, ‘Wouldn’t it really be something if it actually worked?’”

Andersen returned again to ILL in his first management position in which he oversaw research and development of the neutron instruments’ optical components as well as instrument optimization designs. After eight years at ILL as the head of neutron optics, he decided to go from helping develop beamlines to helping develop entirely new facilities. In 2010, he made the move to Sweden to work at the European Spallation Source, which had just begun construction.

As associate laboratory director, Andersen oversees the science and operations of SNS and HFIR—DOE Office of Science user facilities. Both facilities are world-leading centers for neutron scattering research used to study energy and materials at the atomic scale.

Operating at 85 megawatts, HFIR is one of the most powerful research reactors in the world. Neutrons are emitted from the reactor’s core through the process of nuclear fission, providing a steady stream of neutrons that are piped to surrounding neutron scattering instruments for scientific research.

SNS is powered by a 1.4-megawatt linear accelerator that propels bunches of protons down a long system of accelerating structures at 90-percent the speed of light. Neutrons are created when the protons collide with a metal vessel filled with swirling liquid mercury through a process called spallation.

A Proton Power Upgrade project is well underway at the SNS, which will double the power of the linear accelerator from 1.4 to 2.8 megawatts. The increased power will enable researchers to work with smaller samples and will provide enough power to support the Second Target Station, a new research facility with cutting-edge technology for new types of experiments not possible anywhere else.

“My favorite part of the day is the walk-around. By far, the majority of my time is spent in meetings, very often resolving issues which are urgent, but usually addressing near-term tactics. It can be challenging to find the time to stay focused on the important longer-term strategies. Walking around the facility is a daily reminder of why we are here, and I always return feeling grateful and inspired after talking to staff.”

Andersen divides his time evenly between SNS and HFIR to ensure both facilities receive his fullest attention. It’s exciting to him, he says, to think about how very different technically the facilities are from each other, yet they essentially do the same thing: deliver world-class capabilities for solving the most important science challenges of our time.

“The pandemic taught us a lot about working together and overcoming obstacles. One thing it forced us to do was find new ways to produce science and continue helping researchers find solutions to their problems. As a result, we came up with the remote user program which enables researchers to conduct and monitor their experiments from a satellite location. With the resumption of normal operations, remote access capabilities is now just one more way we’re helping users meet their needs—but there’s certainly no substitute for the satisfaction that comes with seeing users at the beamlines and interacting with some of the most brilliant minds from around the U.S. and abroad.”

Users from industry, academia, and government come from all around the world to use the instruments at SNS and HFIR. There are three basic techniques to neutron scattering, depending on the material and the kind of information that’s being obtained—diffraction, spectroscopy, and imaging.

Diffraction is used to reveal the location of atoms and molecules, how they’re arranged, and the distance between them. Spectroscopy tells researchers how atoms are behaving based on the particle’s atomic vibrations or quantum excitations. Neutron imaging generates images to study applications in additive manufacturing (also known as 3D printing), geosciences, biology, energy, and transportation.

“These days many experiments take place in conditions mimic ’real-life’ industrial processes or other ’in situ’ situations—seeing how materials behave in the environment in which they are intended to be used, e.g., looking at a battery electrode material within a functioning battery, rather than as a separately provided sample of material.

“We are also pushing the boundary on modelling as we perform the experiment. Unlike many other microscopic probes, neutron scattering data can be entirely calculated from the ground up, so to speak, if you think you understand your system.

“That means that in principle you can make real-time comparisons between what you are measuring and what you think you should be getting, based on your level of understanding,” explains Andersen.

“That would be a tremendous leap forward and requires serious coupling of neutron experiments with high-performance computing and the right software.”

Best advice for a future director of Neutron Sciences:

Andersen says he’s been fortunate to have been given great advice from a number of mentors throughout his career, and in turn he’s passed that advice to others—advice such as being respectful of others’ skillsets and differences and working together as a team.

“We’re able to solve complicated problems through diversity, and we would utterly fail as an organization if we only valued one type of person or one type of profession.

“The other advice I give is not to be afraid of going outside of your comfort zone. That is how you learn. My old PhD supervisor described it as walking out into a swamp. You feel like you’re struggling and sinking in as you move forward, but when you look back, you see the swamp has turned to dry land behind you.

He also got great advice from his predecessor, Paul Langan, during the overlap in his transition to ALD.

“The main one Paul gave me, which admittedly I still struggle with, is to never lose sight of the big picture. Every day brings urgent and detailed challenges to deal with, but make sure you make the time and keep your energy to deal with the longer-term strategic issues.”

In Fiscal Year 2021, the HFIR, SNS, and the other 26 user facilities welcomed researchers – from academic, industry, and government laboratories in all 50 states and the District of Columbia – to perform new scientific research. For details on the DOE Office of Science user facilities, go to User Facilities at a Glance.