Metal Ions First Sneak in, Then Bust Through 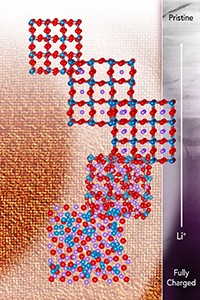 Yang He and Nathan Johnson, PNNL

Single lithium ions (purple) only cause very subtle change of the lattice, but when two or more occupy the same space, they lead to the eventual collapse of the material.

Newswise — Results: When multiple lithium ions intend to crowd into one empty spot in an electrode's atomic framework, they start competing for the nearby oxygen atoms. They tug on the oxygen, distorting the material and eventually causing it to collapse, according to a team led by scientists at Pacific Northwest National Laboratory. They obtained the first atomic-resolution view of this activity with lithium, sodium, and calcium ions.

If multiple ions intend to get into one vacant site, conversion occurs. In this process, the metal ions bond with nearby oxygen ions and destabilize the electrode's atomic structure, which shrinks, distorts, and eventually collapses. This is an irreversible process.

Why It Matters: To create longer lasting, safer, higher capacity energy storage devices, scientists need to understand the basics of intercalation and conversion reactions in electrode crystals. This work provides the first atomic resolution view of these reactions, providing insights into the motion of electrons and ions in energy materials. "This research is important for future innovations of batteries and electrochromic devices, such as smart windows," said Dr. Yingge Du, a material scientist who worked at the national lab on the study.

Methods: Although scientists have long been interested in the interplay between the two reactions, they couldn't directly image or prove these processes. The lack of well-defined model materials and real-time high-resolution imaging capabilities are major challenges toward understanding the key chemical processes in ion batteries. To circumvent the material's challenge, they synthesized thin tungsten oxide films using molecular beam epitaxy. They prepared thin-film electrochemical devices and studied them in situ under a high-resolution transmission electron microscope.

Microscopists, led by Dr. Chongmin Wang at PNNL, resolved the intermediate intercalation steps and the subsequent conversion reactions with lithium, sodium, and calcium ions. Afterwards, their university collaborators ran theoretical simulations. The simulations provided insights into the experimental results. Their work confirmed the intercalation model, which had never been directly seen before.

What's Next? Du and his colleagues are looking at options for separating the two processes. They want to know if more reliable devices can be made to take advantage of the reversible intercalation processes. Also, they are examining the role of defects in the electrode and other materials. They want to know how defects conduct or halt atoms and energy in materials used for batteries and other devices.

Sponsors: This work was supported by the Assistant Secretary for Energy Efficiency and Renewable Energy, Office of Vehicle Technologies of the U.S. Department of Energy (DOE) under the advanced Battery Materials Research program. YD was supported by the Office of Basic Energy Sciences, Division of Materials Sciences and Engineering at DOE's Office of Science and EMSL's Intramural Research and Capability Development Program.