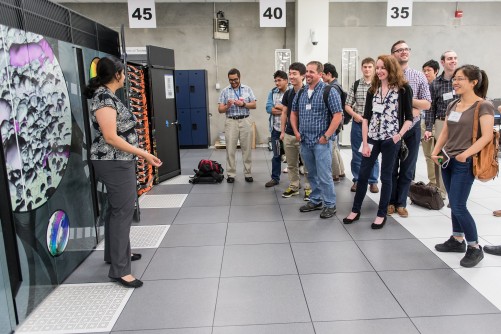 The Modeling, Experimentation and Validation, or MeV, Summer School is an annual 10-day program that provides early-career nuclear engineers with advanced studies in modeling, experimentation and validation of nuclear reactor design. Read more » ABOVE: Jini Ramprakash, with the Argonne Leadership Computing Facility, shows MeV students the Mira supercomputer on a tour.

Newswise — Summer school is often no different than the average school day. Students attend class, complete homework and take tests. But for those participating in the Modeling, Experimentation and Validation Summer School at the U.S. Department of Energy’s Argonne National Laboratory the experience is anything but average.

The Modeling, Experimentation and Validation, or MeV, Summer School is an annual 10-day program that provides early-career nuclear engineers with advanced studies in modeling, experimentation and validation of nuclear reactor design.

According to Marius Stan, senior computational energy scientist in the Energy and Global Security Directorate at Argonne and co-Dean of the 2015 MeV Summer School, the school helps participants grasp the new and advanced methods used in reactor modeling and simulation.

“Innovations in computation are allowing for more precise and accurate models of nuclear reactors,” Stan said. “During the MeV Summer School, we are preparing the students to master new theory-based, multi-scale and multi-physics computational methods. We also encourage them to reflect on the experimental needs for reactor model validation to ensure that the models represent reality.”

In addition to attending lectures from world-renowned experts in the field of nuclear science and technology, the participants, who come from both industry and academic backgrounds, were separated into six teams and assigned a topic to discuss and research under the guidance of team mentors. The topics highlighted key questions in the design of next-generation nuclear reactors and corresponded with this year’s theme of “Novel Challenges in Multi-Physics, Modeling, Simulation and Analysis of Reactor Systems.”

The assignments addressed subjects such as new areas of reactor physics, the challenges of experimental validation, and the importance of modeling and simulation in safety decision making.

“So many topics are covered during the school, and it brings things on your radar that you weren’t aware of before,” Connaway said.

The teams wrote a report on their topic and presented a summary of their work on the final day of the program. A committee awarded the paper from Connaway’s team the Best MeV Team Paper prize.

Mark Onufer, a neutronics analysis engineer for TerraPower, said the knowledge he gained from participating in the MeV school can be directly applied to his work.

“It helped me to be more aware of the variable nature of nuclear data,” Onufer said. “My job is to model an experiment that was done in the past and ensure the simulation agrees with the experiment results. Sometimes the data may be slightly off and that’s something I need to be aware of in order to properly interpret the results of my simulations.”

Argonne National Laboratory seeks solutions to pressing national problems in science and technology. The nation's first national laboratory, Argonne conducts leading-edge basic and applied scientific research in virtually every scientific discipline. Argonne researchers work closely with researchers from hundreds of companies, universities, and federal, state and municipal agencies to help them solve their specific problems, advance America's scientific leadership and prepare the nation for a better future. With employees from more than 60 nations, Argonne is managed by UChicago Argonne, LLC for the U.S. Department of Energy's Office of Science. For more, visit www.anl.gov.