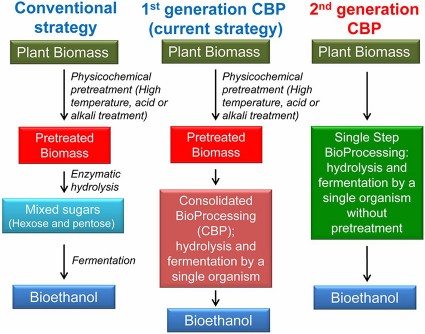 Comparison of bioethanol production strategies, including second-generation consolidated bioprocessing, a single-step process in which a microbe breaks down unpretreated cellulosic biomass and converts the resulting sugars into fuel.

The conventional strategy for producing ethanol from plant biomass requires costly pretreatment and enzyme-driven reactions. Refining another strategy known as consolidated bioprocessing (CPB) could reduce costs. In second-generation CPB, a microorganism splits of water and ferments the products to ethanol, reducing the cost. Now, scientists engineered a strain of a CBP bacterium called Caldicellulosiruptor bescii that efficiently breaks down biomass without pretreatment. The microbe produces ethanol, demonstrating the successful conversion of switchgrass cellulosic biomass.

Direct conversion of biomass to ethanol without pretreatment represents a new paradigm for CPB, offering the potential for carbon-neutral, cost-effective, and sustainable biofuel production.

Producing ethanol from plant biomass typically requires three major steps: physicochemical pretreatment, enzymatic breakdown of biomass into its constituent sugars, and fermentation. Pretreatment and enzymatic hydrolysis are costly steps in the process. CBP could reduce costs. In CBP, unpretreated cellulosic biomass is converted to a biofuel in a single process by a microbe that breaks down the biomass and ferments the resulting sugars. Caldicellulosiruptor bescii had been shown to ferment untreated switchgrass, but it lacked the genes to make ethanol. Because C. bescii is a thermophile (heat loving) and CBP is carried out at elevated temperatures, a gene for a heat-stable enzyme enabling ethanol synthesis was needed. Researchers identified a candidate gene in Clostridium thermocellum and cloned it into C. bescii. The engineered strain of C. bescii was then able to produce ethanol from cellobiose, Avicel, and switchgrass. To optimize ethanol fermentation, two genes were deleted that would otherwise divert fermentation products. In this new C. bescii strain, roughly 30% of biomass was fermented, and 1.7 moles of ethanol were produced for each mole of glucose, an amount close to the theoretical 2.0 moles of ethanol per mole of glucose. Although efficiencies can be further improved, this study is an important step in realizing the potential of CBP and provides a platform for engineering the production of advanced biofuels and other bioproducts directly from cellulosic biomass without harsh and expensive pretreatment.

This research was conducted by the BioEnergy Science Center, a U.S. Department of Energy (DOE) Bioenergy Research Center supported by the Office of Biological and Environmental Research within DOE's Office of Science.