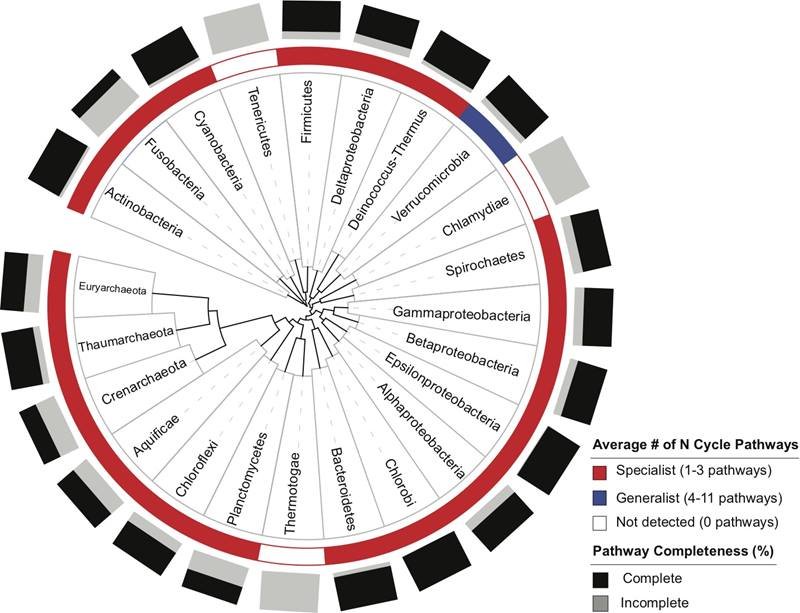 Specialization for inorganic nitrogen metabolism. The outer ring shows a substantial fraction of incomplete pathways were found in genomes from each phylum. For most phyla, the average number of pathways per genome was about 1.9.

Scientists can use genetic information to measure if microbes in the environment can perform specific ecological roles. Researchers recently analyzed the genomes of over 6,000 microbial species. They investigated how the genetic machinery (pathways) of different species related to inorganic nitrogenous nutrient cycling. They aimed to uncover how often microorganisms are involved in more than one nitrogen-related reaction. They also wanted to understand how often microbes lacked important parts of those pathways. The analysis revealed that most microbes are specialists. They carry the genes for only a few pathways and often lack parts of the machinery for pathways they do carry.

Understanding the distribution of nutrient cycling pathways among microbial species can help researchers better understand the fate of those nutrients in nature. It provides insight into what controls systems’ behavior, how productive an environment might be, and how ecosystems might behave in the future. This study suggests that microbes commonly specialize in specific metabolic tasks and often share products they produce among species. The diversity of microbes really does matter to the structure of chemical transformation networks in nature.

Researchers often utilize functional genes as a proxy for the potential of microbial communities to mediate specific biochemical and nutrient cycling processes. Metabolic pathways for such processes are, in many cases, composed of multiple steps, requiring more than one protein to function. Genomic data also suggests that pathways can sometimes be incomplete, though it is not well understood what the ecological implications of incomplete pathways might be. The genes for 11 different inorganic nitrogen transformation pathways were thus investigated in 6,384 bacterial and 252 complete archaeal genomes. The analysis aimed to determine how commonly pathways were incomplete, how frequently different pathways co-occur, and how these finding relate to the evolutionary history of microbes. Results from this study indicate that the co-occurrence of different N cycling pathways is infrequent and that pathways are frequently incomplete. These data imply that many microbes specialize in specific metabolic transformations and that interspecies transfer of metabolic products is an important feature of microbial community behavior. It also implies that a mismatch of community members may lead to inefficient nutrient turnover or even loss of metabolic intermediates from a system.

This work was supported by the Department of Energy, Office of Science, Office of Biological and Environmental Research via a Scientific Focus Area Award.