Study shows that "stop" code can be assigned other meanings. 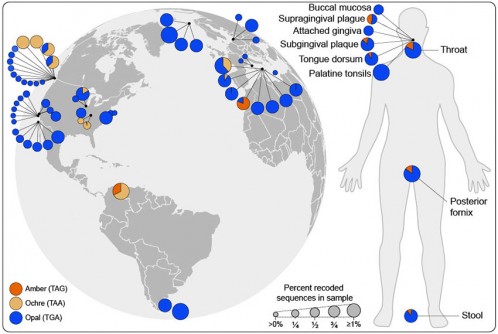 Researchers have found that some wild organisms interpret a genetic sequence typically read as “stop” to mean something else. This map shows the locations of samples of wild microbial DNA collected from around the globe and the human body for which recoded stop sequences (named amber, ochre, and opal) have been identified.

Some wild microorganisms, found in nature and not grown in the laboratory, reinterpret the instructions coded into their DNA. Short segments of DNA that signal other organisms to stop adding building blocks or amino acids to a protein are instead interpreted as "add another amino acid."

The data from these wild microbes helps researchers realize that some preconceived notions of microbial behavior may not be accurate because they are based on data from the small fraction of microbes that have been cultivated and studied in a laboratory.

Four letters -- A, C, G, and T -- represent the bases in DNA for all organisms on Earth. Because the particular order, or sequence, of these four letters genetically defines an organism, determining the sequence is a foundational starting point for many biological investigations. Within this sequence are shorter, three-letter groups called codons that represent amino acids, the building blocks of proteins that carry out myriad functions critical to life. Of the 64 codons, 61 routinely code for the 20 known amino acids. Three codons function as stop signals and are used to mark the end of protein generation. Given that all organisms have genetic material or genomes built on the same four letters, scientists have long assumed that organisms also share a common vocabulary and interpret the 64 codons the same. However, researchers from the U.S. Department of Energy (DOE) Joint Genome Institute (JGI) show that for many uncultivated microbes, the instructions for these three codons mean anything but stop. The stop codons often were reassigned to code for amino acids. Led by DOE JGI Director Eddy Rubin, researchers studied a collection of viral sequences as well as uncultivated microbes whose genomes had been described through single-cell genomics and metagenomics. Nearly 6 trillion bases of sequence data were analyzed from 1,776 samples collected from the human body and several sites around the world. The team found that reassignment of all three stop codons was found but with different preferences by domain and habitat. The team observed distinct patterns of stop codon reassignment (each stop codon has a name: amber, opal, and ochre.). Bacteria showed only opal reassignments. Eukaryotes showed ochre reassignments. Archaea were devoid of codon reassignments. Among DNA viruses, the team found both amber and opal reassignments. This work builds on a previous study in which DOE JGI researchers successfully used single-cell genomics to shed insight on a plethora of microbes representing 29 "mostly uncharted" branches on the tree of life.