Advances in simulating biogeochemical processes in permafrost will improve predictions of potential impacts on climate. 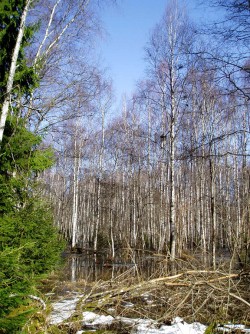 An international team examined microbial community dynamics at a site in Sweden where portions of the site are frozen permafrost and other areas are thawed (as shown here). They found that a particular microbe dominates the recently thawed areas, providing insights to improve climate predictions.

Newswise — Northern permafrost ecosystems are changing rapidly, with rising temperatures causing many previously frozen environments to become wetlands such as fens. As permafrost thaws, the trapped organic carbon is accessible to microbial decomposition, which can release greenhouse gases (GHGs) to the atmosphere. A team led by the University of Arizona examined microbial community dynamics at a site in Sweden where portions of the site are frozen permafrost and other areas are thawed. They found that a single microbe dominated recently thawed sites, with its relative abundance strongly correlating with the magnitude and specific type of methane produced at any given site.

The results represent a significant advance in understanding and accurately modeling the critical biogeochemical processes of microbes in permafrost. The findings will improve predictions of climate change impacts on these delicate ecosystems and of potential consequences to the atmosphere. Finding the striking dominance of a single microbial species in mediating the large-scale carbon cycle process is highly unusual and provides an opportunity to more effectively track and predict the impacts of climate change across an entire region. Incorporating the datasets will facilitate development of ecosystem-scale models of the processes.

Understanding of microbial communities that can release greenhouse gases (GHGs) is limited, especially the specific nature of processes that affect rates of carbon decomposition and the balance of released carbon dioxide (CO2) versus methane (CH4). Because CH4 is a much more potent GHG in the short term, understanding the microbial mechanisms driving the large-scale processes of both gases would significantly improve the ability to predict possible climate change impacts. An international, interdisciplinary team of researchers led by the University of Arizona has examined microbial community dynamics at a site in northern Sweden located in a natural temperature gradient. Northern portions of this site are frozen permafrost, while southern areas are thawed wetland fens. Over several years, the team (1) measured CO2 and CH4 production along the gradient, (2) examined isotopic signatures of the gases characteristic of distinct microbial processes, and (3) correlated the data with measured shifts in microbial community composition and abundance. Only small amounts of GHGs were released from frozen permafrost, but progressively more were released, predominantly CH4, with increasing temperatures and thawing. The team linked these observations with extensive shifts in microbial community composition, revealing a reproducible succession pattern of different types of CH4-producing microbes (methanogens) across the thaw gradient. Surprisingly, a single methanogen species, Candidatus Methanoflorens stordalenmirensis, was dominant in recently thawed sites, with its relative abundance strongly correlating with the magnitude and specific type of CH4 produced at any given site.

This work was supported by the Office of Biological and Environmental Research within the U.S. Department of Energy Office of Science (Grant DE-SC0004632); University of Arizona Technology and Research Initiative Fund through the Water, Environmental, and Energy Solutions Initiative; and an Australian Postgraduate Award Scholarship. Other support was contributed by the Abisko Scientific Research Station, managed by the Swedish Polar Research Secretariat.