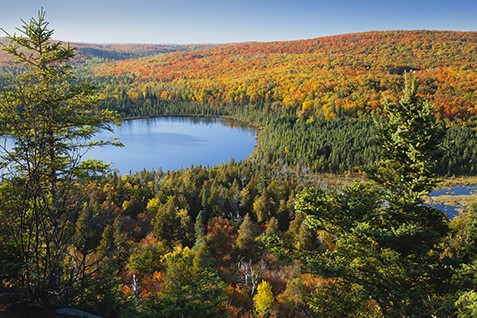 Large amounts of methane, a potent greenhouse gas, are produced during decomposition of plant matter in the sediments of lakes and wetlands. Certain bacteria consume much of this methane, reducing the net amount released into the atmosphere. In a recent study, researchers examined community interactions between methane-eating bacteria such as methanotrophs and other microbes that control this important process. The scientists discovered that the methane eaters receive signals from other bacteria in the community to convert some of the methane to methanol. The methanol serves as food for those non-consumers of methane. These results suggest certain microbial community partners can alter gene expression in other community members. This alteration has important implications for microbial interactions in the environment.

Historically, much of the research in microbiology focused on looking at pure cultures of individual bacteria. However, new capabilities and experimental methods are allowing scientists to observe and begin to understand microbes as a diverse, complex community where microbes must interact and often cooperate for survival. This study uses an elegantly constructed model to examine the genetic basis of these interactions. While this work focuses on consumption of the methane in lake sediments, the underlying mechanisms that drive these microbial interactions are relevant to other complex communities including those found in agricultural fields.

Several decades of research have demonstrated the importance of bacterial methanotrophs in carbon cycling processes of lakes, wetlands, and a variety of other environments. However, methanotrophs exist as members of diverse communities of regularly co-occurring non-methanotrophic microbes, and the roles of these organisms in methane cycling are not well understood. In a recent study, researchers at the University of Washington assembled an experimental model community of methanotrophs and associated non-methanotrophic microbes previously isolated from lake sediments. Using a community-scale metaomics analysis of shifts in gene expression, the team tracked how the associated organisms influenced each other during methane-driven growth. They found that the presence of non-methanotrophs triggered an enzymatic and metabolic shift in the methanotrophs, resulting in conversion of a portion of the available methane into methanol, which was released to fuel the growth of these microbes. Not yet clear is if the methanotrophs derive some form of reciprocal benefit from this “cross-feeding,” or if this represents a type of parasitism. In either case, these findings considerably alter current understanding of methanotrophy as it occurs in complex environmental communities and suggest that much remains to be learned about the basic biological mechanisms driving an important element of the global carbon cycle.

This study was supported by the U.S. Department of Energy, Office of Science, Office of Biological and Environmental Research, Genomic Science program under award DE-SC-0010556.