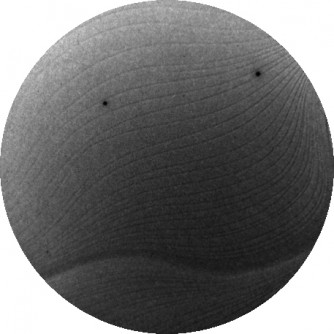 Low-energy electron microscopy images of the nickel-aluminum surface before and after oxidation. The faint lines before oxidation indicate the atom-high steps that separate flat terrace sections of the crystal surface. As oxidation begins at a point on one terrace, the oxide spreads in elongated stripes along that terrace, pushing steps out of the way and bunching them closer and closer together. Eventually the bunching of steps stops the growth of the oxide stripe and another begins to form, often at right angles, to produce a grid-like pattern. 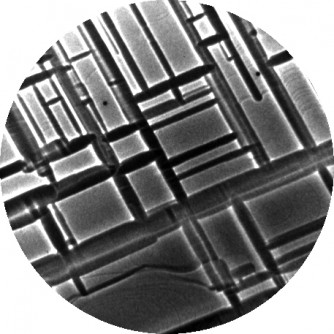 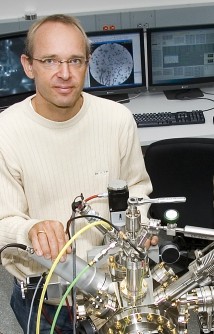 Peter Sutter with one of the low-energy electron microscopes at Brookhaven Lab's Center for Functional Nanomaterials. 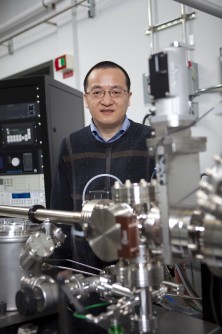 Newswise — UPTON, NY—Rust never sleeps. Whether a reference to the 1979 Neil Young album or a product designed to protect metal surfaces, the phrase invokes the idea that corrosion from oxidation—the more general chemical name for rust and other reactions of metal with oxygen—is an inevitable, persistent process. But a new study performed at the Center for Functional Nanomaterials (CFN) at the U.S. Department of Energy's (DOE) Brookhaven National Laboratory reveals that certain features of metal surfaces can stop the process of oxidation in its tracks.

The findings, published in the Proceedings of the National Academy of Sciences, could be relevant to understanding and perhaps controlling oxidation in a wide range of materials—from catalysts to the superalloys used in jet engine turbines and the oxides in microelectronics.

The experiments were performed by a team led by Guangwen Zhou of Binghamton University, in collaboration with Peter Sutter of the CFN, a DOE Office of Science User Facility. The team used a low-energy electron microscope (LEEM) to capture changes in the surface structure of a nickel-aluminum alloy as "stripes" of metal oxide formed and grew under a range of elevated temperatures.

"These microscopes are not that frequently found in ordinary research labs; there are only a handful around the U.S.," Sutter said. "We have a pretty lively 'user community' of scientists who come to the CFN just to use this type of instrument."

The metal Zhou wanted to study, nickel-aluminum, has a characteristic common to all crystal surfaces: a stepped structure composed of a series of flat terraces at different heights. The steps between terraces are only one atom high, but they can have a significant effect on material properties. Being able to see the steps and how they change is essential to understanding how the surface will behave in different environments, in this case in response to oxygen, Sutter said.

Said Zhou, "The acquisition of this kind of knowledge is essential for gaining control over the response of a metal surface to the environment."

Scientists have known for a while that the atoms at the edges of atomic steps are especially reactive. "They are not as completely surrounded as the atoms that are part of the flat terraces, so they are more free to interact with the environment," Sutter said. "That plays a role in the material's surface chemistry."

The new study showed that the aluminum atoms involved in forming aluminum oxide stripes came exclusively from the steps, not the terraces. But the LEEM images revealed even more: The growing oxide stripes could not "climb" up or down the steps, but were confined to the flat terraces. To continue to grow, they had to push the steps away as oxygen continued to grab aluminum atoms from the edges. This forced the steps to bunch closer and closer together, eventually slowing the rate of oxide stripe growth, and then completely stopping it.

"For the first time we show that atomic steps can slow surface oxidation at the earliest stages," Zhou said.

However, as one stripe stops growing, another begins to form. "As the oxide stripes grow along the two possible directions on the crystal, which are at right angles to one another, one ends up with these patterns of blocks and lines that are reminiscent of the grid-based paintings by Mondrian," Sutter said. "They are quite beautiful…" and persistent after all.

In fact, scientists who've studied a different "cut," or facet, of the crystalline nickel-aluminum alloy have observed that steps on that surface had no effect on oxide growth. In addition, on that surface, aluminum atoms throughout the bulk of the crystal could participate in the formation of aluminum oxide, and the oxide stripes could overrun the steps, Zhou said.

Still the details and differences of the two types of surfaces could offer new ways scientists might attempt to control oxidation depending on their purpose.

"Oxides are not all bad," Sutter said. "They form as a protective layer against corrosion attack. They play important roles in chemistry, for example in catalysis. Silicon oxide is the insulating material on microelectronic circuits, where it plays a central role in directing the flow of current."

Knowing which kind of surface a material has and its effects on oxidation—or how to engineer surfaces with desired properties—might improve the design of these and other materials.

To see an electronic version of this news release with related graphics, go to:http://www.bnl.gov/newsroom/news.php?a=11686. 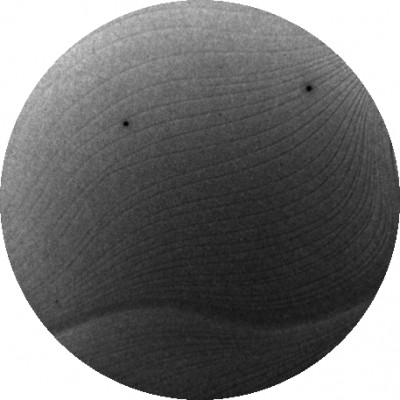 Caption: Low-energy electron microscopy images of the nickel-aluminum surface before and after oxidation. The faint lines before oxidation indicate the atom-high steps that separate flat terrace sections of the crystal surface. As oxidation begins at a point on one terrace, the oxide spreads in elongated stripes along that terrace, pushing steps out of the way and bunching them closer and closer together. Eventually the bunching of steps stops the growth of the oxide stripe and another begins to form, often at right angles, to produce a grid-like pattern. 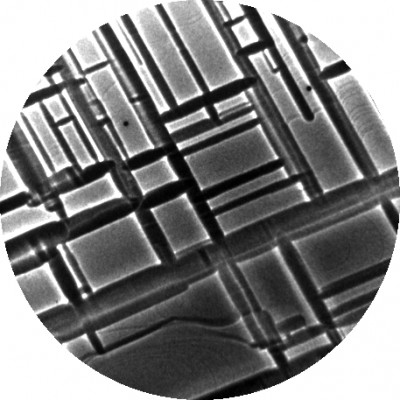 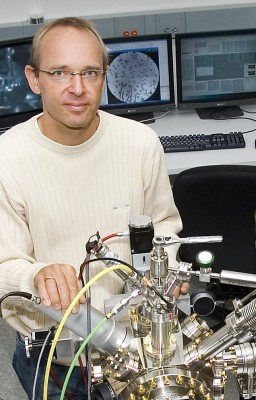 Caption: Peter Sutter with one of the low-energy electron microscopes at Brookhaven Lab's Center for Functional Nanomaterials. 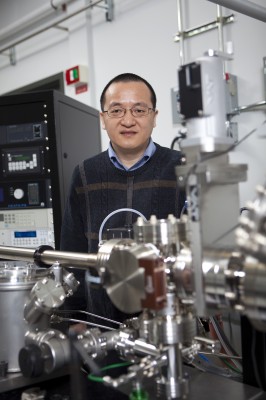