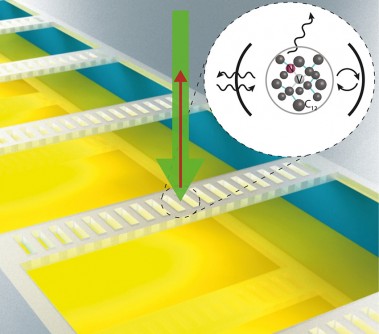 Tiny, nanoscale mirrors were constructed to trap light around atoms inside of diamond crystals, acting like a series of funhouse mirrors. The mirrored cavities in the crystal allow light to bounce back and forth up to 10,000 times, enhancing the normally weak interaction between light and the electronic spin states in the atoms. As a result, a 200-microsecond spin-coherence time – how long the memory encoded in the electron spin state lasts – was produced.

The enhanced interactions between light and atoms and the extended spin-coherence times are essential steps toward realizing real-world quantum memories and, hence, quantum computing systems, which could solve some problems faster than conventional systems. Additionally, these advances could significantly impact the development of high-security, long-distance, cryptographic fiber optic communication networks.

Nanoscale mirrored cavities that trap light around atoms in diamond crystals increase the quantum mechanical interactions between light and electrons in atoms. Such interactions are essential to the creation and the connection of memory for quantum computers. Recent research, performed at the Massachusetts Institute of Technology (MIT) and the Center for Functional Nanomaterials at the U.S. Department of Energy’s Brookhaven National Laboratory, has demonstrated a new process to construct such diamond nanocavities in which memories are encoded inside the electronic spin states of an atomic system, with a memory time exceeding 200 microseconds. This improvement in the coherence time is more than two orders of magnitude better than previously reported times for cavity-coupled single quantum memories in solid state systems. The fabrication of the optical cavities relied on a new silicon hard-mask fabrication process that applies mature semiconductor fabrication methods for patterning high-quality photonic devices into unconventional substrates.

Fabrication and experiments were supported in part by the Air Force Office of Scientific Research (AFOSR Grant No. FA9550-11-1-0014). Research was carried out in part at the Center for Functional Nanomaterials, Brookhaven National Laboratory, which is supported by the U.S. Department of Energy, Office of Science, Office of Basic Energy Sciences, under Contract No. DE-AC02-98CH10886. Support is also acknowledged from the Alexander von Humboldt Foundation, the NASA Office of the Chief Technologist’s Space Technology Research Fellowship, the AFOSR Quantum Memories Multidisciplinary University Research Initiative, and the National Science Foundation Integrative Graduate Education and Research Traineeship Program, Interdisciplinary Quantum Information Science and Engineering (iQuISE).