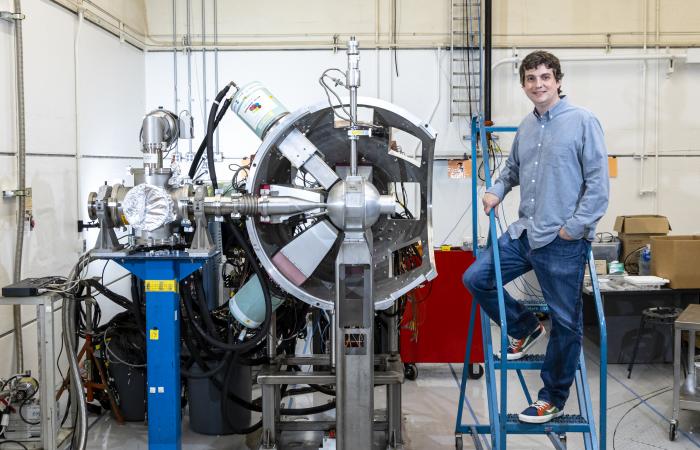 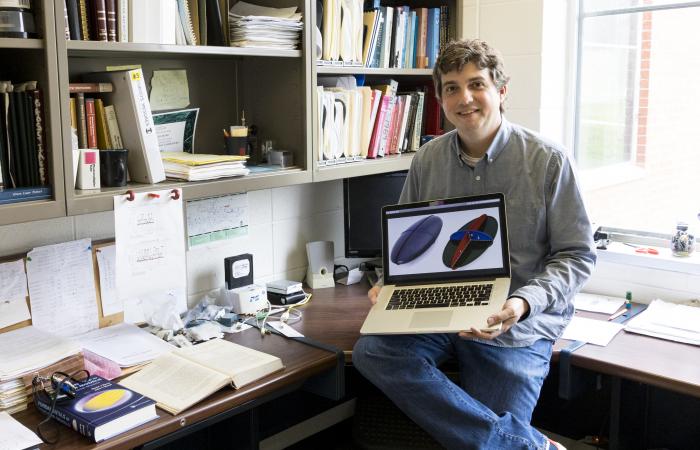 Allmond studies interactions between nucleons that can drive nuclei from spherical to deformed shapes. 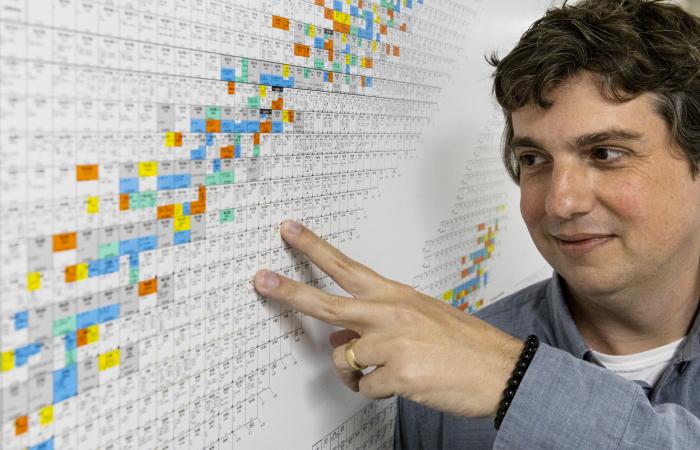 Prospecting for deformations in exotic isotopes of ruthenium and molybdenum, Allmond found they displayed a deflated-football morphology.

Newswise — In the Physics Division of the Department of Energy’s Oak Ridge National Laboratory, James (“Mitch”) Allmond conducts experiments and uses theoretical models to advance our understanding of the structure of atomic nuclei, which are made of various combinations of protons and neutrons (nucleons).

“I focus on describing how nucleons organize and what patterns emerge from those organizations,” Allmond said.

Within a nucleus, each nucleon follows a “mean field” generated by the other nucleons. Protons and neutrons each organize into shells of different energy levels, as electrons do. Nucleons joining a new nucleus drop to the lowest energy within an unfilled shell that the laws of physics permit. Residual interactions between nucleons can drive nuclei from spherical to deformed shapes.

Allmond often models nuclei as a collective whole—a liquid drop rotating along three axes—and makes precision measurements to test his models. If the lengths of all axes are identical, the nucleus is shaped like a basketball; its shells are full of nucleons. If one axis is longer than two other equal axes, the nucleus is deformed into the shape of an American football; its shells are only partially filled. If all three axes are of different lengths, the result is a triaxial rotor shaped like a deflated football. Evidence for this latter shape remains scarce and debated.

With CARIBU, Allmond can accelerate a radioactive isotope and study it through Coulomb excitation, a technique that collides nuclei in a purely electromagnetic interaction, permitting model-independent shape measurements. Allmond wants to understand what shapes are possible.

Most prior studies had looked for triaxial deformation in the osmium and platinum nuclei, the best naturally occurring candidates for the deflated-football morphology. Allmond prospected for deformations in exotic isotopes of ruthenium and molybdenum made in radioactive beams and found that these too displayed that extreme shape despite having dramatically different masses and numbers of nucleons.

“Maybe all nuclei have some degree of triaxial deformation,” he posited. “It changes our general understanding and impacts expectations for the even higher-lying excited states that are experimentally very difficult to reach and probe.” For example, if all three axes are different, nuclei can wobble, manifesting movements with degrees of freedom that leading theories do not typically account for.

Moreover, Allmond said, “Nuclear models that don’t take triaxial deformation into account will not be able to accurately predict ground-state properties like masses and lifetimes. That impacts phenomena like r-process nucleosynthesis, which determines the natural abundance of elements.” He added, “Beyond that, it can impact the calculated decay heat within a nuclear reactor. Missing data has to be calculated, and those calculations are only as good as your models.”

From fishin’ to fission

Allmond, with two sisters, grew up on a thoroughbred horse farm in Georgia. His father was a pharmacist, and his mother, a nurse. “Part of my experimental side was developed as a kid on a farm, having to quick-and-dirty rig things up—redneck engineering—whether it was fixing an electrical fence, a pump to keep the horses’ troughs full of water, or a broken tractor or lawnmower engine. So many things have to be done that you don’t obsess over making everything perfect; you just make sure it works,” he recalled. “That law of diminishing returns helps in physics, knowing when you have accomplished your goal.”

Allmond enjoyed deep-sea fishing and scuba diving with his dad enough to consider a career in marine biology. However, the best university for that major was in a small town, and Allmond was ready to experience a big city. “I picked Atlanta—and with it, Georgia Tech,” he said.

As a sophomore there, he took physics from John Wood. “Since he was, in my mind, the best professor there in terms of patience and enthusiasm and just the way he communicated, I felt like nuclear physics was the best path for me.”

Allmond did a required undergraduate research project studying the shape of erbium-166 with Wood and continued with him for his doctorate. After that, he began a postdoctoral fellowship at the University of Richmond with nuclear structure expert Con Beausang, who had a collaboration with Lawrence Berkeley National Laboratory and sent Allmond there in 2007 to do experiments at the 88-Inch Cyclotron.

In California, Allmond met David Radford of ORNL, a world-renowned gamma-ray detector expert who later offered him a postdoctoral fellowship. He also met an artist who would become his wife.

In 2010 the couple moved to Tennessee and recently bought a house near Oak Ridge. His family’s farm is a mere 5 hours away if he feels like horseback riding, fishing or fixing something.

Shape of things to come

Allmond used radioactive ion beams from ORNL’s now-defunct Holifield Radioactive Ion Beam Facility and a detector array called BareBall-CLARION to study doubly magic tin-132. He also led a study that added two neutrons and two protons above its full proton and neutron shell closures. “We found that the two neutrons seem to be running the show,” he said, in terms of the collective nucleon motion and slightly deformed shape of its nucleus.

“There are limitations to what I can measure and what he can calculate,” Allmond said. Each contributes fundamental understanding that will affect the shape of discoveries to come.

Allmond currently looks forward to DOE’s Facility for Rare Isotope Beams (FRIB), under construction at Michigan State University and expected to begin operations in 2022. He is a leader developing instrumentation for FRIB, in particular the FRIB Decay Station, which is led by ORNL and University of Tennessee at Knoxville. This detector system, which will be used to study the decay properties and structures of exotic nuclei, is uniquely positioned to make crucial contributions toward discovery experiments at the extreme limits of nuclear existence on Day One of operations. It will have a transformative impact on our understanding of nuclear structure, nuclear astrophysics, fundamental symmetries, and isotopes for important applications.

UT-Battelle manages ORNL for DOE’s Office of Science. The single largest supporter of basic research in the physical sciences in the United States, the Office of Science is working to address some of the most pressing challenges of our time. For more information, please visit https://energy.gov/science. –by Dawn Levy

Caption: Allmond studies interactions between nucleons that can drive nuclei from spherical to deformed shapes.

Caption: Prospecting for deformations in exotic isotopes of ruthenium and molybdenum, Allmond found they displayed a deflated-football morphology.