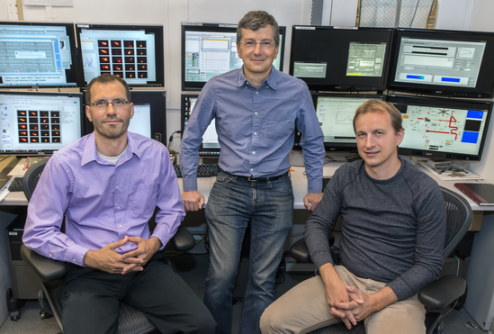 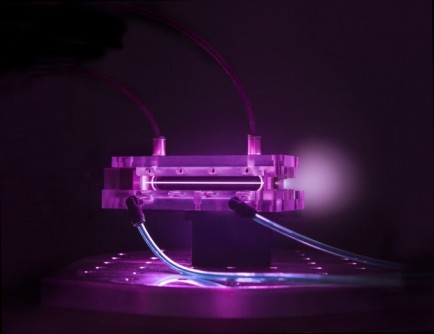 A 9 cm-long capillary discharge waveguide used in BELLA experiments to generate multi-GeV electron beams. The plasma plume has been made more prominent with the use of HDR photography.

Currently, x-ray light sources hold great scientific promise but there are only a handful of these light sources worldwide: each is miles long and costs hundreds of millions of dollars to develop. What’s more, access to these facilities is greatly limited, clogging the pipeline of scientific experiments possible.

A free electron laser uses an accelerator to produce a high-energy electron beam that produces laser radiation. Unlike conventional accelerators, laser-plasma accelerators use high-power optical lasers instead of high-power radio frequency waves to accelerate electrons across short distances, typically centimeters. These electrons “surf” on waves generated by the interaction between the laser and the plasma, much like a surfer pushed forward by an ocean wave. Laser-plasma accelerators are desirable because they hold the potential to produce a compact, inexpensive high-energy electron beam compared to a conventional accelerator.

Laser-plasma accelerators, however, are an emerging technology. Research to-date has produced electron beams with sufficient energy to produce laser radiation, but other measures related to the quality of these beams still remain unresolved.

Berkeley Lab researcher Wim Leemans and his colleagues have been refining laser-plasma acceleration for more than a decade.

“We are now in the position that we know enough that we want to push for this next big challenge: can we build small accelerators and produce radiation that is typically produced by larger accelerators?” said Leemans, director of the Accelerator Technology and Applied Physics Division (ATAP) at Berkeley Lab. “We want to develop these accelerators in such a way that accessing the light produced by these beams is much less expensive and can be performed in much smaller settings.”

The Moore Foundation grant will enable experiments that address this important question by observing free electron lasers operating at short wavelengths using an electron beam from a laser-plasma accelerator. Leemans, who also directs the Berkeley Lab Laser Accelerator (BELLA) center housing one of the most powerful lasers in the world, will work with a team that also includes Berkeley Lab senior scientist Carl Schroeder and scientist Jeroen van Tilborg, along with postdoctoral researchers, graduate students and technical staff.

During the course of his career, Leemans says he has seen “tremendous progress” toward generating high-quality electron beams from laser plasma accelerators. “Ultimately, if it turns out that we have the beam quality under control, there’s nothing stopping us from going toward x-rays,” he said. “If we can push down the wavelength of the light into the x-ray, potentially even into hard x-rays, then we have radiation sources with a footprint that is probably one-tenth or less than the big machines.”

“State of the art x-ray sources offer an unprecedented opportunity to probe the microscopic world, but access to these sources is extremely limited,” said Ernie Glover, science program officer at the Moore Foundation. “If successful, this project will demonstrate a path to significantly reduce the size and cost of these sources and greatly expand their scientific impact.”

“With support from the Moore Foundation, we hope we can show that this technology is real and that it will revolutionize the way accelerators can be built in the future for universities, companies, small institutes and beyond—that’s our goal,” said Leemans.

This research is funded by the Gordon and Betty Moore Foundation through Grant 4898.

DOE’s Office of Science is the single largest supporter of basic research in the physical sciences in the United States and is working to address some of the most pressing challenges of our time. For more information, please visit the Office of Science website at http://www.science.energy.gov/. 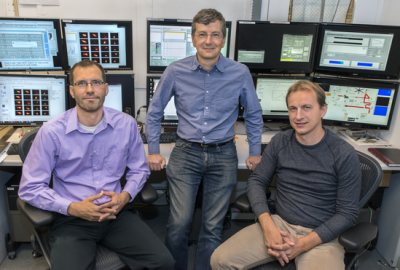 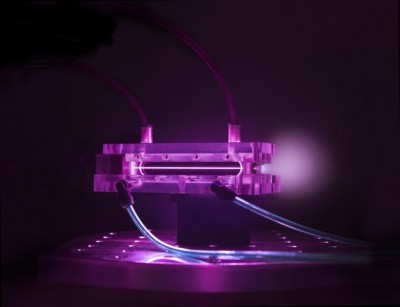 Caption: A 9 cm-long capillary discharge waveguide used in BELLA experiments to generate multi-GeV electron beams. The plasma plume has been made more prominent with the use of HDR photography.