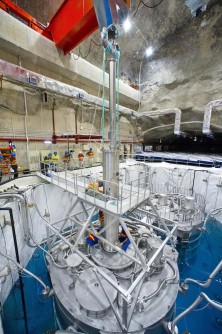 Workers install a Manual Calibration Unit on an antineutrino detector at Daya Bay. This unit was integral in precisely measuring antineutrino energies, as detailed in a new study. 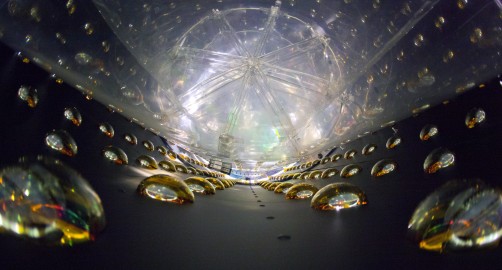 A view inside the particle detectors at Daya Bay, where photomultiplier tubes measure signals from antineutrinos. 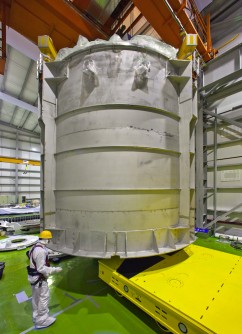 A detector tank, prior to installation at Daya Bay.

Newswise — An international team that includes researchers from the U.S. Department of Energy’s Lawrence Berkeley National Laboratory (Berkeley Lab) has captured the most precise—and puzzling—energy measurements yet of ghostly particles called reactor antineutrinos produced at a nuclear power complex in China.

Their measurements, based on data generated from the world’s largest sample of reactor antineutrinos, indicate two intriguing discrepancies with theoretical models. These discrepancies, which will help shape future experiments, could point to flaws in the current models and also raise a possibility for the presence of an exotic type of neutrino that has not been detected before.

Members of the Daya Bay Collaboration published the results, based on an analysis of more than 300,000 nuclear reactor-produced antineutrinos collected over 217 days, in the journal Physical Review Letters. The collaboration measured the energy of the reactor antineutrinos to an unprecedented precision, better than 1 percent, over a broad energy range. The collaboration includes more than 200 scientists from seven regions and countries.

Studying the behavior of elusive neutrinos, which can pass through most types of matter unobstructed, holds the potential to unlock many secrets of physics, including details about the history, makeup and fate of our universe. Neutrinos and antineutrinos were among the most abundant particles at the time of the Big Bang, and are still generated abundantly today in the nuclear reactions that power stars and in collisions of cosmic rays with Earth’s atmosphere. Trillions of neutrinos pass through your body every second.

Neutrinos, or more specifically antineutrinos, are also emitted as a by-product of power generation in manmade nuclear reactors, giving scientists a powerful way to study them on Earth in a controlled manner. In fact, the study of particles emitted by reactors led to the first detection of neutrinos in the 1950s, a finding once considered impossible due to the extremely inert nature of these particles, which were then only predicted.

Since that time reactor experiments, including those at Daya Bay, have played a crucial role in uncovering the secrets of neutrino oscillations—their tendency to switch among three known flavors: electron, muon, and tau—and other important neutrino properties.

Daya Bay’s measurement of the antineutrino flux—the total number of antineutrinos emitted across the entire energy range—indicates that the reactors are producing 6 percent fewer antineutrinos overall when compared to some of the model-based predictions. This observed deficit has been named the “Reactor Antineutrino Anomaly.”

“Our result is consistent with the past measurements. The anomaly could be due to the imperfection of the models. Or, more intriguingly, it could come from an oscillation involving a sterile neutrino,” said Kam-Biu Luk, a faculty senior scientist in Berkeley Lab’s Physics Division and a professor of physics at UC Berkeley. He is also the co-spokesperson of the Daya Bay Collaboration. Whether the so-called sterile neutrino, postulated by some theories but yet to be detected, exists or not is still an open question.

The measured reactor antineutrino spectrum also shows a surprising excess of antineutrinos at an energy of around 5 million electron volts (MeV) compared with theoretical expectations.

“The disagreement between our measurement and the theoretical calculations is about 10 percent, corresponding to a statistical significance of up to four standard deviations,” commented Patrick Tsang, a postdoctoral fellow in Berkeley Lab’s Physics Division who played a key role in the measurements. Two other experiments have shown a similar excess at this energy, though with less precision than the new Daya Bay result.

Such deviations show the importance of the direct measurement of the reactor antineutrino spectrum, particularly for experiments that use the spectrum to measure neutrino oscillations, and may indicate the need to revisit the models underlying the calculations.

“A recent calculation of the spectrum based on compiled measurements of thousands of isotopes involved in the fission process showed a much better agreement with observations," said Dan Dwyer, a staff scientist in the Berkeley Lab Physics Division, “and suggested the excess of antineutrinos comes from eight specific short-lived nuclei.”

The Daya Bay measurement is expected to improve with more data and a better understanding of the detector response. These improved measurements will be essential for next-generation reactor neutrino experiments such as the JUNO experiment being built 200 kilometers away from Daya Bay.

A crucial factor for many of these experiments is knowing how many antineutrinos are emitted in total in these nuclear reactions, and how many are being produced at particular energies, which is known as the energy distribution or spectrum.In early studies, scientists relied on calculations or other indirect means, such as electron spectrum measurements made on reactor fuels, to estimate these numbers. These methods have rather strong dependence on theoretical models of the complex fission processes in the reactor core.

The Daya Bay Collaboration now provides the most precise model-independent measurement of the energy spectrum of these elusive particles, and a new measurement of total antineutrino flux. The most challenging part of this work was to accurately calibrate the energy response of the detectors.

“Accurate measurement of the antineutrino energy was one of the keys for this result. We carefully quantified the energy response of our detectors using various calibration methods," said Yasuhiro Nakajima, a Chamberlain fellow in Berkeley Lab’s Physics Division.

The Daya Bay nuclear power complex is located on the southern coast of China, 55 kilometers northeast of Hong Kong. It consists of three nuclear power plants, each with two reactor cores. All six cores are pressurized water reactors with similar design, and each can generate up to 2.9-gigawatt thermal power. Every second, the six reactors emit 3,500 billion billon electron antineutrinos. For this measurement, the Daya Bay experiment used six detectors located at 360 meters to 1.9 kilometers from the reactors. Each detector contains 20 tons of gadolinium-doped liquid scintillator to detect the reactor antineutrinos. 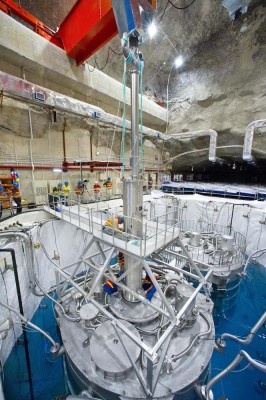 Caption: Workers install a Manual Calibration Unit on an antineutrino detector at Daya Bay. This unit was integral in precisely measuring antineutrino energies, as detailed in a new study. 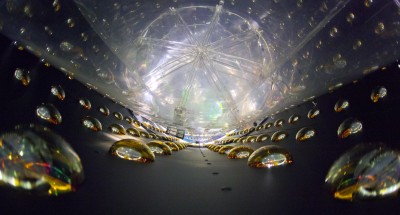 Caption: A view inside the particle detectors at Daya Bay, where photomultiplier tubes measure signals from antineutrinos. 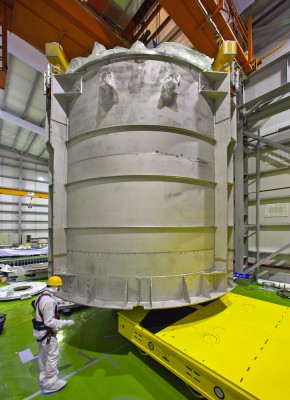 Caption: A detector tank, prior to installation at Daya Bay.