Mountaintop Plants and Soils to Become Out of Sync

Plants and soil microbes may be altered by climate warming at different rates and in different ways, meaning vital nutrient patterns could be misaligned. 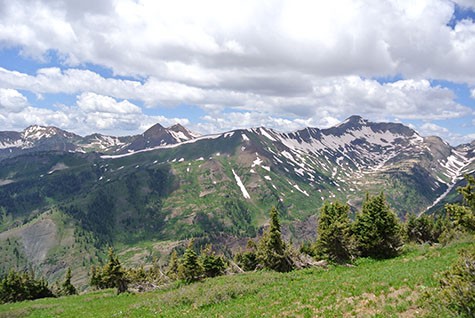 Treeline along an elevational gradient in the Colorado Rockies, one of seven mountaintop regions sampled in the study.

Newswise — Warmer climates on mountaintops will alter the activity of plants and soil microbes. These alterations can affect the availability and movement of important nutrients such as nitrogen, phosphorous, and carbon. As a result, these cycles may become out of step with their historic patterns at high elevations. The result? Severe impacts to plants that have evolved under those patterns.

In many mountain ecosystems around the world, nitrogen and phosphorus cycles are constrained at higher, cool elevations, while these cycles are becoming decoupled at lower, warmer elevations. Consequently, plants may not be able to “march up the mountainside” when it warms, as many models predict. A study shows how mountain ecosystems may respond to warming in the future. These ecosystems are biodiversity hotspots. They provide numerous human services such as clean drinking water.

This work was made possible by a Wallenberg Scholars Award to D.A.W.; regional support from Fondecyt 1120171 to A.F.; National Science Foundation Dimensions of Biodiversity grant (NSF-1136703), Carlsberg Fund grant, and the Danish National Research Foundation’s support to the Center for Macroecology, Evolution, and Climate to N.J.S.; U.S. Department of Energy, Office of Science, Office of Biological and Environmental Research, Terrestrial Ecosystem Science program award (DE-SC0010562) to A.T.C.; support from the United Kingdom’s Natural Environment Research Council to R.D.B.; support from the BiodivERsA project Resilience of Marginal Grasslands and Biodiversity Management Decision Support (REGARDS) (ANR-12-EBID-004-01) to J.C.C., S.L., and K.G. and REGARDS (FWF-I-1056) to M.B.; support from the Netherlands Organization for Scientific Research (VENI 451-14-017) to D.L.O.; and support from the Natural Sciences and Engineering Research Council of Canada to Z.G.