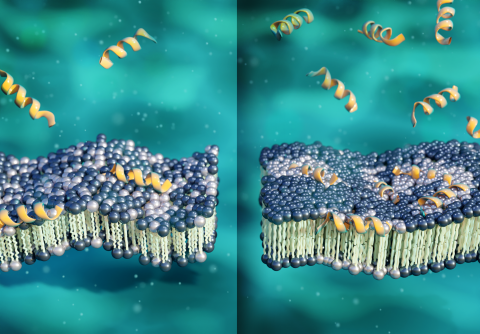 Scientists used neutrons to better understand how an antimicrobial peptide known as aurein 1.2 kills antibiotic resistant bacteria by attacking their membranes. As the peptide concentration increases (yellow), aurein 1.2 induces lipid molecule clusters (white) within the membrane, making it thicker, more rigid, and more susceptible to break down under stress. Their findings could inform new strategies for treating infections where antibiotics have fallen short.

Newswise — Since the advent of penicillin more than 90 years ago, antibiotic drugs have saved countless lives by preventing and treating bacterial infections. However, bacteria are rapidly developing new ways to resist antibiotics, making some of modern medicine’s most powerful drugs less effective against many life-threatening infections, such as gonorrhea, Methicillin-resistant Staphylococcus aureus (MRSA) and Clostridioides difficile (C. difficile), among others. Today, the Centers for Disease Control and Prevention (CDC) estimate nearly 3 million drug-resistant infections occur each year in the United States alone.

This rise in resistance has driven an aggressive search for new methods for fighting bacterial threats. One potential strategy for combating antibiotic resistance involves developing strings of amino acids, called peptides, that have a penchant for neutralizing bacterial invaders.

One group of peptides, known as antimicrobial peptides (AMPs), serves as an innate line of defense against microbial diseases in animals, plants, and other multicellular organisms. Given their ability to quickly identify and take down a wide range of pathogens, these peptides are considered promising therapeutic candidates for treating bacterial infections where antibiotics have fallen short.

“AMPs fight bacterial cells by targeting their membranes with the help of electrostatic and hydrophobic forces,” explains Shuo Qian, the neutron scattering scientist at ORNL who led this research. “The fundamental structure of a cell membrane is a double layer of lipid molecules. Many of the lipid molecules making up the surface of bacterial cell membranes are negatively charged, which is highly attractive for positively charged AMPs. Once bound to an intruding bacterial cell, the hydrophobic peptides will often embed themselves within the membrane to avoid exposure to water.”

When present in great enough numbers, AMPs bore deep holes within bacterial membranes. This action disrupts the membrane’s structure and leaves the invading bacterial cells weakened. The downside is that developing therapeutics with high peptide concentrations could be more costly and might introduce side effects in patients. Drugs that effectively kill antibiotic-resistant bacteria without needing a high peptide count would be more beneficial for patient health at a better price. This is where aurein 1.2 provided insights for addressing the issue.

Made up of just 13 amino acids, aurein 1.2 is one of the shortest AMPs found in nature. Originally discovered in Australian tree frogs, synthetically generated versions of this peptide have proven to be potent against various bacteria. However, the molecular mechanism behind its pathogen-fighting capabilities has largely remained unknown.

Neutrons can nondestructively probe the chemical elements that make up biological systems, such as peptides and membranes, making neutron scattering an ideal technique for collecting detailed information on those systems.

Previous neutron experiments led by Qian at ORNL, published in Scientific Reports and in Langmuir, provided some initial clues to the peptide’s mystery mechanism. These studies showed that, instead of puncturing holes in bacterial membranes as other AMPs do, aurein 1.2 interferes with the membranes’ electrostatic balances. At low concentrations, the positive charge of the peptide causes lipid molecules to slow their lateral movement and form clusters with other similarly charged lipid molecules within the membrane. This behavior had not been observed before in other AMP interactions.

Using the EQ-SANS instrument to measure peptide penetration within the membrane, Qian found that aurein 1.2 remained embedded near the membrane’s surface, even at high concentrations. Zolnierczuk then performed experiments on the Neutron Spin Echo Spectrometer to examine aurein 1.2’s impact on membrane flexibility and compressibility.

“Membrane fluctuations occur on the order of tens or hundreds of nanoseconds, and neutron spin echo spectroscopy is the only technique capable of measuring dynamical behaviors at that length and timescale,” said Zolnierczuk. “By analyzing neutron spin echo data through mathematical models, we can then infer information about a membrane’s mechanical properties, such as how soft or stiff the membrane becomes.”

The experiments revealed that, when subjected to low peptide concentrations, the membrane becomes thinner and more flexible. At slightly higher concentrations, the peptides cause the membrane to increase in thickness and stiffness. The results suggest that, through its lipid-clustering mechanism, aurein 1.2 peptides can make bacterial membranes thicker and more rigid.

“In normal conditions, the lipid molecules that make up membranes are constantly moving around to accommodate biological activities. It’s a very fluid, inhomogeneous environment in a delicate balance. However, we found that when aurein 1.2 causes lipid molecules to slow down and form unexpected clumps, the membranes end up becoming more rigid than usual,” said Qian.

In this state, the bacterial membrane cannot recover from stresses as quickly, its structural integrity is weakened, and it’s less able to carry out normal functions. This combination of adverse effects makes the bacterial cell more likely to break down under stress. It’s similar to how freezing temperatures slow down water molecules and turn flowing water into stiff, brittle ice.

The data obtained from this research will help scientists better understand the intricacies of AMP-based defenses against bacteria and could inform future therapeutic strategies for fighting infections in an increasingly antibiotic-resistant world.

Looking ahead, this kind of research will be greatly enhanced by the Second Target Station (STS) currently under construction at ORNL. The STS will provide transformative new capabilities for discovery science, enabling breakthroughs in many areas of materials research and development.

One of the initial STS instruments, CENTAUR, will deliver unprecedented capabilities for studying materials under a wide range of length scales with high resolution, measuring smaller samples, and making time-resolved investigations of evolving structures in various scientific areas, including biological membranes and other forms of soft matter.

The research was supported by the DOE Office of Science. This work also used resources from the Center for Structural Molecular Biology at ORNL. The deuterium oxide used in this research was supplied by the US Department of Energy Isotope Program, managed by the Office of Isotope R&D and Production.