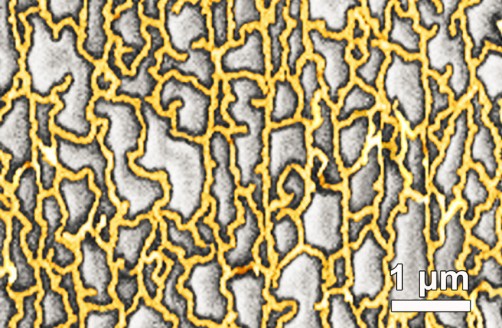 Image courtesy of University of Houston

Tuning topology and adhesion of metal nanomeshes has led to super stretchable, transparent electrodes that don’t wear out. The scanning electron microscopy image shows the structure of a gold mesh created with a special lithographic technique that controlled the dimensions of the mesh structure. Optimizing this structure and its adhesion to the substrate was key to achieving super stretchability and long lifetimes in use--nanomeshes on pre-stretched slippery substrates did not show signs of wear even after repeated stretching, up to 50,000 cycles.

Flexible solar panels that could be rolled up for easy transport and other devices would benefit from transparent metal electrodes that can conduct electricity, are stretchable, and resist damage following repeated stretching. Researchers found that topology and the adhesion between a metal nanomesh and the underlying substrate played key roles in creating such materials. The metal nanomesh can be stretched to three times its length while maintaining a transparency comparable to similar commercial materials used in solar cells and flat panel displays. Also, nanomeshes on pre-stretched slippery substrates led to electrodes that didn’t wear out, even after being stretched 50,000 times.

Next-generation flexible electronics require highly stretchable and transparent electrodes. Fatigue, structural damage due to repeated use, is deadly in metals as it leads to poor conductivity and it commonly occurs in metals with repeated stretching—even with short elongations. However, few electronic conductors are transparent and stretchable, even fewer can be cyclically stretched to a large strain without causing fatigue. Now researchers led by the University of Houston found that optimizing topology of a metal nanomesh and its adhesion to an underlying substrate improved stretchability and eliminated fatigue, while maintaining transparency. A special lithographic technique called “grain boundary lithography” controlled the dimensions of the mesh structure. The metal nanomesh remained transparent after being stretched to three times its length. Gold nanomeshes on prestretched slippery substrates impressively showed no wear when stretched 50,000 times. The slippery surface advantageously allowed the structure of the nanomesh to reorient to relax the stress. Such electrically conductive, flexible, and transparent electrodes could lead to next-generation flexible electronics such as advanced solar cells. The nanomesh electrodes are also promising for implantable electronics because the nanomeshes are biocompatible.