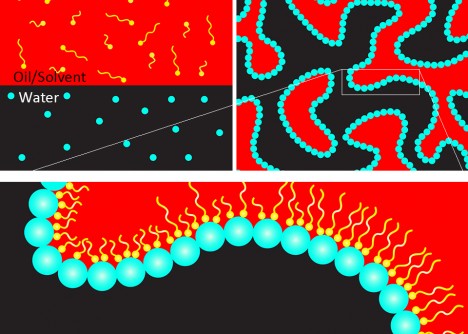 Illustration shows key stages of bijel formation. Clockwise from top left, two non-mixing liquids are shown. Ligands (shown in yellow) with amine groups are dispersed throughout the oil or solvent, and nanoparticles coated with carboxylic acids (shown as blue dots) are scattered in the water. With vigorous shaking, the nanoparticles and ligands form a “supersoap” that gets trapped at the interface of the two liquids. The bottom panel is a magnified view of the jammed nanoparticle supersoap. 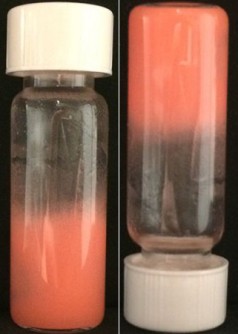 At left is a vial of bijel stabilized with nanoparticle surfactants. On the right is the same vial after a week of inversion, showing that the nanoparticle kept the liquids from moving.

Newswise — A new two-dimensional film, made of polymers and nanoparticles and developed by researchers at the Department of Energy’s Lawrence Berkeley National Laboratory (Berkeley Lab), can direct two different non-mixing liquids into a variety of exotic architectures. This finding could lead to soft robotics, liquid circuitry, shape-shifting fluids, and a host of new materials that use soft, rather than solid, substances.

The study, reported today in the journal Nature Nanotechnology, presents the newest entry in a class of substances known as bicontinuous jammed emulsion gels, or bijels, which hold promise as a malleable liquid that can support catalytic reactions, electrical conductivity, and energy conversion.

Bijels are typically made of immiscible, or non-mixing, liquids. People who shake their bottle of vinaigrette before pouring the dressing on their salad are familiar with such liquids. As soon as the shaking stops, the liquids start to separate again, with the lower density liquid – often oil – rising to the top.

Trapping, or jamming, particles where these immiscible liquids meet can prevent the liquids from completely separating, stabilizing the substance into a bijel. What makes bijels remarkable is that, rather than just making the spherical droplets that we normally see when we try to mix oil and water, the particles at the interface shape the liquids into complex networks of interconnected fluid channels.

Bijels are notoriously difficult to make, however, involving exact temperatures at precisely timed stages. In addition, the liquid channels are normally more than 5 micrometers across, making them too large to be useful in energy conversion and catalysis.

“Bijels have long been of interest as next-generation materials for energy applications and chemical synthesis,” said study lead author Caili Huang. “The problem has been making enough of them, and with features of the right size. In this work, we crack that problem.”

Huang started the work as a graduate student with Thomas Russell, the study’s principal investigator, at Berkeley Lab’s Materials Sciences Division, and he continued the project as a postdoctoral researcher at DOE’s Oak Ridge National Laboratory.

The method described in this new study simplifies the bijel process by first using specially coated particles about 10-20 nanometers in diameter. The smaller-sized particles line the liquid interfaces much more quickly than the ones used in traditional bijels, making the smaller channels that are highly valued for applications.

“We’ve basically taken liquids like oil and water and given them a structure, and it’s a structure that can be changed,” said Russell, a visiting faculty scientist at Berkeley Lab. “If the nanoparticles are responsive to electrical, magnetic, or mechanical stimuli, the bijels can become reconfigurable and re-shaped on demand by an external field.”

The researchers were able to prepare new bijels from a variety of common organic, water-insoluble solvents, such as toluene, that had ligands dissolved in it, and deionized water, which contained the nanoparticles. To ensure thorough mixing of the liquids, they subjected the emulsion to a vortex spinning at 3,200 revolutions per minute.

“This extreme shaking creates a whole bunch of new places where these particles and polymers can meet each other,” said study co-author Joe Forth, a postdoctoral fellow at Berkeley Lab’s Materials Sciences Division. “You’re synthesizing a lot of this material, which is in effect a thin, 2-D coating of the liquid surfaces in the system.”

The liquids remained a bijel even after one week, a sign of the system’s stability.

Russell, who is also a professor of polymer science and engineering at the University of Massachusetts-Amherst, added that these shape-shifting characteristics would be valuable in microreactors, microfluidic devices, and soft actuators.

Nanoparticles had not been seriously considered in bijels before because their small size made them hard to trap in the liquid interface. To resolve that problem, the researchers coated nano-sized particles with carboxylic acids and put them in water. They then took polymers with an added amine group – a derivative of ammonia – and dissolved them in the toluene.

This configuration took advantage of the amine group’s affinity to water, a characteristic that is comparable to surfactants, like soap. Their nanoparticle “supersoap” was designed so that the nanoparticles join ligands, forming an octopus-like shape with a polar head and nonpolar legs that get jammed at the interface, the researchers said.

“Bijels are really a new material, and also excitingly weird in that they are kinetically arrested in these unusual configurations,” said study co-author Brett Helms, a staff scientist at Berkeley Lab’s Molecular Foundry. “The discovery that you can make these bijels with simple ingredients is a surprise. We all have access to oils and water and nanocrystals, allowing broad tunability in bijel properties. This platform also allows us to experiment with new ways to control their shape and function since they are both responsive and reconfigurable.”

The nanoparticles were made of silica, but the researchers noted that in previous studies they used graphene and carbon nanotubes to form nanoparticle surfactants.

“The key is that the nanoparticles can be made of many materials,” said Russell.  “The most important thing is what’s on the surface.” 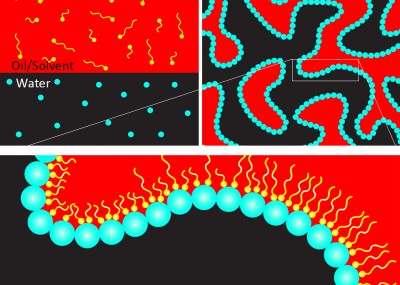 Caption: Illustration shows key stages of bijel formation. Clockwise from top left, two non-mixing liquids are shown. Ligands (shown in yellow) with amine groups are dispersed throughout the oil or solvent, and nanoparticles coated with carboxylic acids (shown as blue dots) are scattered in the water. With vigorous shaking, the nanoparticles and ligands form a “supersoap” that gets trapped at the interface of the two liquids. The bottom panel is a magnified view of the jammed nanoparticle supersoap. 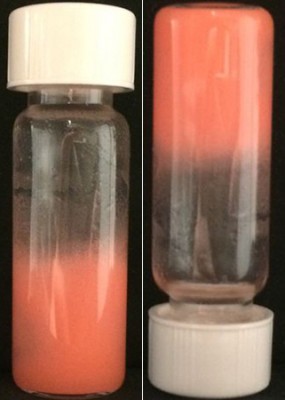 Caption: At left is a vial of bijel stabilized with nanoparticle surfactants. On the right is the same vial after a week of inversion, showing that the nanoparticle kept the liquids from moving.