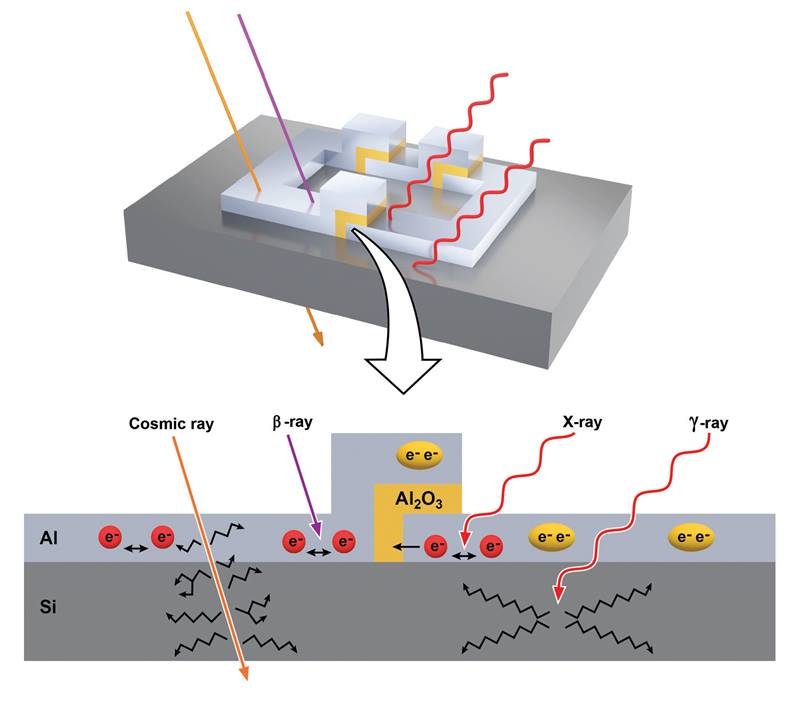 Newswise — Quantum computers consist of superconducting quantum bits, or “qubits,” that take the place of the conventional bits in today’s digital computers. Scientists suspected that naturally occurring radiation hurts the performance of these qubits. This radiation comes from the environment, cosmic rays, and other natural sources. Now, two new experiments have clearly demonstrated the correlation between radiation levels and the duration of qubit coherence. This coherence is critical for quantum computers: it ensures that qubits can retain the information they are programmed to store. Radiation breaks pairs of electrons that typically carry current without resistance in a superconductor. The resulting excess of unpaired electrons tends to destroy the delicate prepared state of a qubit. When this state is destroyed, a qubit loses its stored information. If radiation cannot be mitigated, it will limit the coherence time of qubits to just a few milliseconds. That time is too short for practical quantum computing.

The new research is important for future quantum computers with superconducting qubits. Without a detailed understanding of the cascade process that leads from naturally occurring radiation to broken electron pairs, scientists will not able to achieve longer qubit coherence times. The new research points to two avenues for progress. Qubit devices could be made less sensitive through design improvements informed by an understanding of the cascade process. Radiation levels could be also reduced through shielding. This could potentially include operating quantum computers in underground facilities.

Quantum computers are important because they will be able to perform certain kinds of calculations that are beyond the reach of what even the largest digital supercomputers can achieve. One of the biggest challenges to creating a fully capable quantum computer is to build qubits that can store information long enough to perform an efficient error-corrected calculation. This quality of a qubit is called coherence. Many forces can destroy, or decohere, the delicate prepared state of a qubit. One of the sources of decoherence is ordinary electrons that are not paired up like most of the electrons that carry current in a superconductor. Superconductors typically have far more unpaired electrons than scientists predict. Scientists have hypothesized that radiation from natural radioactivity causes at least some of these excess unpaired electrons by breaking up otherwise paired electrons. This radiation comes from our Sun, cosmic rays, and elements in earth itself.

Recent research has demonstrated the connection between radiation, the excess of unpaired electrons, and their harmful effects on superconducting qubits. Specifically, the coherence times were reduced under elevated radiation from a radioactive source.  Coherence times increased when devices were shielded from natural radiation. The experimental team concluded that while some other effects are primarily responsible for the current limits of around 100 microseconds, radiation will eventually limit coherence to a few milliseconds without adequate mitigation strategies.

This work was supported by the Department of Energy Office of Science, Office of Nuclear Physics under its Initiative in Quantum Information Science. The research was also funded by the U.S. Army Research Office (ARO), the ARO Multi-University Research Initiative, the National Science Foundation, and the Assistant Secretary of Defense for Research and Engineering.