Nature-Inspired Nanotubes That Assemble Themselves, with Precision 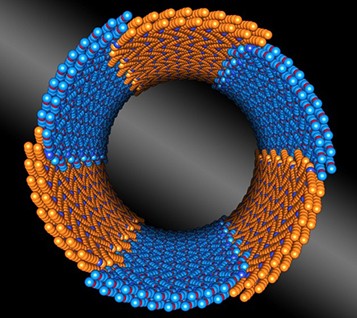 Precision meets nano-construction. Scientists discovered a peptoid (a stand-in for a small protein) composed of two chemically distinct blocks (shown in orange and blue) that assembles itself into tiny tubes with uniform diameters.

When it comes to the various nano-widgets scientists are developing, tubes with inner diameters just a few billionths of a meter wide could tackle jobs better than conventional materials. Creating millions of nanotubes with identical diameters is difficult. Precise manufacturing is needed. Help could be on the way. Scientists discovered a family of nature-inspired materials that, when placed in water, spontaneously assemble into nanotubes. What’s more, scientists can tune the tubes to all have the same diameter, within a few nanometers, or billionths of a meter.

The research is the latest in the effort to use synthetic polymers to precisely build durable nanotubes that approach the complexity and function of nature’s proteins. Because scientists can control the diameter of the nanotubes and the chemical groups exposed inside, these tubes could do jobs as diverse as delivering cancer-fighting drugs inside cells or desalinating seawater.

Scientists discovered a family of nature-inspired polymers that, when placed in water, spontaneously assemble into crystalline nanotubes. The polymers have two chemically distinct blocks that are the same size and shape. The scientists learned these blocks act like molecular tiles that form rings, which stack together to form nanotubes up to 100 nanometers long, all with the same diameter. The polymers are part of the peptoid family. Peptoids are rugged synthetic polymers that mimic peptides, which nature uses to form proteins. Scientists can tune the peptoids at the atomic scale to carry out specific functions. Cryo-electron microscopy imaging of 50 of the nanotubes showed the diameter of each tube is relatively uniform along its length, as well as from tube to tube. This analysis also revealed a striped pattern across the width of the nanotubes, which indicates the rings stack together to form tubes, and rules out other packing arrangements. How exactly these nanotubes form has yet to be determined, but this latest research sheds light on their structure, and hints at a new design principle that could be used to build nanotubes and other complex nanostructures.