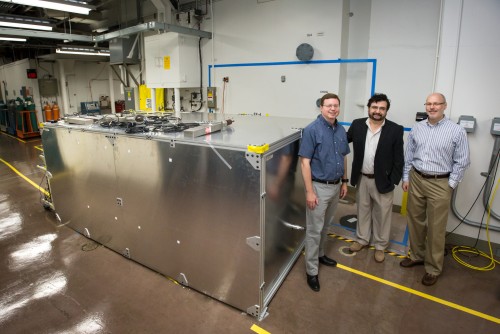 From left, David Dean, Alfredo Galindo-Uribarri and Chris Bryan of Oak Ridge National Laboratory check on a prototype detector at the High Flux Isotope Reactor, a Department of Energy Office of Science User Facility that creates continuous neutron beams. The prototype will mine neutrinos formed as a byproduct of radioactive decay processes for one of three neutrino experiments with major ORNL participation. 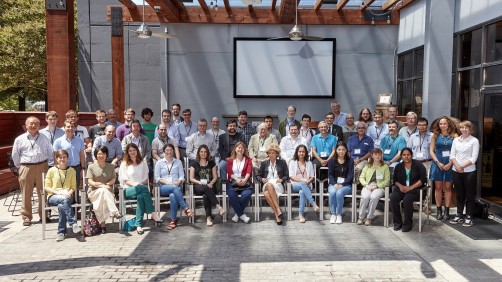 Newswise — Approximately 100 trillion neutrinos bombard your body every second—but you don’t notice these ghostly subatomic particles. Because they are electrically neutral and interact with other matter via the weak force, their detection is difficult—and the subject of challenging experiments that convene physicists from universities, national labs and other research institutions worldwide.

The demonstration that neutrinos can change identities—made possible by two large experiments—was rewarded with the Nobel Prize last year. The discovery meant that neutrinos have mass, albeit small. It hinted at new physics beyond the Standard Model, which captures our current understanding of matter and energy but is incomplete. This year the field of neutrino physics is full of enthusiasm as three significant experiments with different goals gear up to advance our understanding of neutrino physics. All three experiments benefit from expertise and facilities at the Department of Energy’s Oak Ridge National Laboratory.

“We’re enthusiastic because these experiments will provide the means to answer basic questions about the universe,” said ORNL physicist Alfredo Galindo-Uribarri. Physicists will use novel detectors to explore unknowns of the cosmos, from the properties of neutrinos to the possibility that neutrinos are a component of dark matter, which makes up one-quarter of the universe.

Partnering institutions from all over the world later built the MAJORANA DEMONSTRATOR’s neutrino detector at the Sanford Underground Research Facility in South Dakota to detect an event that, if seen, would have weighty implications for the nature of the neutrino and its role in the cosmos. ORNL nuclear physicists have lead roles in project management, detector development and design, and detector modeling and simulation. David Radford, who leads the MAJORANA and Advanced Detectors group in ORNL’s Physics Division, joined the MAJORANA Collaboration in 2006. ORNL took on project office leadership in 2009.

The MAJORANA DEMONSTRATOR uses the isotope germanium-76 as both source and detector in a search for “neutrinoless double-beta decay.” The initial experiment, with equipment weighing 88 pounds (40 kilograms), is to demonstrate the feasibility of a much larger ton-scale experiment. If the decay process is observed, it would prove that the neutrino is its own antiparticle, give a measure of the neutrino mass, and provide a possible answer to why the universe is made of matter and not antimatter.

Detecting neutrinos from neutron factoriesTwo other large, collaborative neutrino experiments, called PROSPECT and COHERENT, are sited in Tennessee at ORNL. These two high energy physics experiments will detect, for the first time, neutrinos generated at two facilities whose main purpose is the production of neutrons.

Two new neutrino detectors for COHERENT and PROSPECT are possible thanks to ORNL’s two world-class neutron “factories,” the Spallation Neutron Source (SNS) and the High Flux Isotope Reactor (HFIR). SNS and HFIR are DOE Office of Science User Facilities. At ORNL’s neutron factories neutrinos are produced in very large quantities during normal operations. Why not use the neutrinos for experiments too? At SNS, researchers use the proton beam parasitically to generate neutrinos for the COHERENT experiment. At HFIR, the neutrinos to be detected by PROSPECT are produced in the core of the reactor from the decay of fission products.

PROSPECT is a reactor neutrino experiment led by Yale University. Its partners will mine information about neutrino oscillations—transmutations of electron neutrino, muon neutrino and tau neutrino “flavors” from one to another. Specifically, they want to find out if neutrinos oscillate over short distances (less than 20 meters). Short-baseline neutrino oscillations have not been definitively observed. Observing neutrinos from HFIR’s core would allow precision measurements of the neutrino flux and energy spectrum and possibly reveal the existence of a fourth flavor known as “sterile neutrinos.” Seeing this new particle would necessitate revising the Standard Model, which describes elementary particles and the forces that govern them.

“PROSPECT is sited at HFIR because it was identified as the best site for short-baseline neutrino experiments, in part due to the fact that it has the most compact core of any high-power research reactor,” said Chris Bryan, who manages experiments at HFIR for ORNL’s Research Reactors Division. The study involves 68 collaborators from 14 institutions, including 14 from ORNL. Near the reactor, experimenters will place a movable detector system that, including shielding, weighs 30 tons and stands 15 feet tall. The detector system will sit as close as 21 feet to the reactor core. Researchers will fill it with 3 tons of liquid scintillator to detect the flash produced when a neutrino interacts with a proton to form a positron (or anti-electron) and a neutron. A prototype detector has been built at ORNL for tests preparing for the arrival of PROSPECT’s detection instrument, now under construction at Yale. That instrument will be deployed at ORNL’s famous research reactor before data collection begins next year.

COHERENT, a Duke University–led experiment at SNS, has partners from 16 institutions. Its 65 researchers include 8 from ORNL, with Jason Newby, a physicist in the Nuclear Security and Isotope Technology Division, as the ORNL representative to the collaboration. The scientists aim to make first-of-a-kind measurements of a phenomenon predicted by the Standard Model but never observed—the scattering of low-energy neutrinos off various nuclei. “The pulsed nature of the proton beam makes the Spallation Neutron Source a unique facility for this experiment,” said ORNL Physics Division Director David Dean. “In the U.S., the SNS is the best facility for observing coherent, low-energy neutrino scattering.”

Because the SNS accelerator produces pulsed beams of protons, the neutrinos will be pulsed too, allowing researchers to easily separate scientifically significant signals from background noise.

For this test of the Standard Model, a beam of protons will hit a target of mercury, an atom with a big nucleus capable of releasing a slew of particles, including pions that stop in the target, decay and release neutrinos. Because the pions decay at rest, the neutrinos generated will be of low energy and suitable for the scattering experiments. In the SNS basement under the mercury target, these neutrinos will penetrate 20 meters of shielding before being identified by a detector made of a 31-pound scintillating crystal of cesium iodide. Three additional targets of argon, germanium and sodium iodide will be installed this fall.

Owing in large part to ORNL facilities, and large national collaborative efforts, scientists worldwide will soon be better able investigate the nature of these ghostly neutrinos, forcing them out of the dark shadows of the unknown universe.

The U.S. Department of Energy supports neutrino research through its Office of High Energy Physics, with the exception of neutrinoless double-beta decay studies, which are supported by the Office of Nuclear Physics. 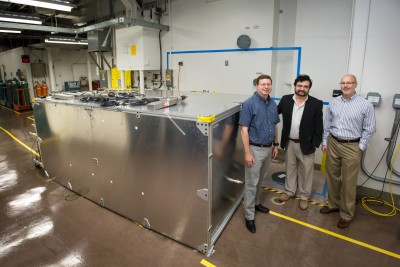 Caption: From left, David Dean, Alfredo Galindo-Uribarri and Chris Bryan of Oak Ridge National Laboratory check on a prototype detector at the High Flux Isotope Reactor, a Department of Energy Office of Science User Facility that creates continuous neutron beams. The prototype will mine neutrinos formed as a byproduct of radioactive decay processes for one of three neutrino experiments with major ORNL participation. 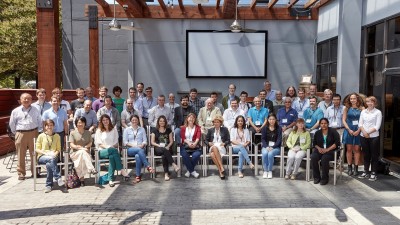