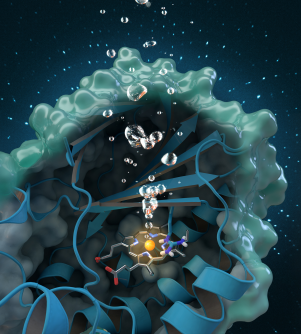 Chlorite dismutase is a unique oxygen-generating enzyme that degrades chlorite, an industrial pollutant found globally in groundwater, drinking water and soils. Research conducted at ORNL contributes to a comprehensive structural and biochemical analysis of the enzyme, paving the way for future environmental applications.

Newswise — A new study sheds light on a unique enzyme that could provide an eco-friendly treatment for chlorite-contaminated water supplies and improve water quality worldwide.

An international team of researchers led by Christian Obinger from the University of Vienna used neutron analysis at Oak Ridge National Laboratory, x-ray crystallography and other techniques to study the chlorite dismutase enzyme. This naturally occurring protein can break down chlorite, an industrial pollutant found in groundwater, drinking water and soils, into harmless byproductwes, but its catalytic process is not well understood. Understanding how the bacterial enzyme converts chlorite into chloride and oxygen could open possibilities for future applications in bioremediation and biotechnology.

The results, published in ACS Catalysis, also contribute to fundamental research on the enzyme’s ability to produce oxygen. Oxygen generation is incredibly rare in nature, once thought possible only by photosynthesis, so the enzymatic activity of chlorite dismutase has attracted interest from the scientific community beyond its environmental applications for clean water.

Exactly how chlorite dismutase works at a molecular level to break down chlorite has been debated since the enzyme was discovered in 1996. The complexity of the enzyme’s molecular structure and the difficulty of studying proteins with experimental methods present inherent challenges for researchers.

Like most enzymes, chlorite dismutase is a protein that catalyzes a highly specific reaction. The process is often environmentally dependent, meaning it works best within specific parameters, including temperature, concentration and pH ranges. Identifying the ideal parameters for the reaction is key to supporting bioengineering and large-scale production of chlorite dismutase to safely remove chlorite from the environment and potentially exploit the enzyme’s oxygen generation.

The team isolated an unstudied Cyanothece strain of chlorite dismutase and examined the protein’s crystal structure at specific pH values to determine the impact of pH on chlorite conversion.

The researchers used MaNDi, the macromolecular neutron diffractometer, beamline 11-B at the Spallation Neutron Source, a Department of Energy User Facility at ORNL, to collect unique data only obtainable through the use of neutrons.

“Different protein crystals have different degrees of symmetry, which will determine how we go about measuring them. This crystal is unusual in that it has very little symmetry, so an especially large number of reflections have to be recorded individually to get a complete data set,” said Leighton Coates, MaNDi Lead Instrument Scientist. “This would be a challenging and lengthy task anywhere, and it was only achievable in this time frame due to the large area detector coverage of the MaNDi instrument.”

On MaNDi, researchers were able to detect the protonation states of important amino acids thought to support the reaction. “Protonation” refers to a fundamental step in catalysis during which hydrogen attaches to molecules. “This is the important region of the protein, where the chemistry is happening and the chlorite is being broken down,” said Coates.

Protonation states are not easily observed because they involve hydrogen, which is difficult to detect with x-rays or other techniques. In addition, a phenomenon called “photoreduction” occurs when exposing metal-containing enzymes like chlorite dismutase to x-rays, essentially changing the atomic structure of the sample.

Because neutron techniques do not have these limitations, they can give researchers key information that cannot be obtained by other methods. “Neutrons are nondestructive and sensitive to light elements like hydrogen, so they can provide exclusive information about the atomic structure of proteins, which are largely composed of hydrogen molecules,” Coates explained.

“And unlike x-rays that can damage delicate proteins, neutron techniques allow you to collect data at room temperature on an unaltered protein in its active state without the impacts of ionizing radiation and photoreduction,” said Coates. “This experiment really highlights the benefit of using neutrons to study proteins.”

The Spallation Neutron Source is a DOE Office of Science User Facility. UT-Battelle manages ORNL for the DOE Office of Science. The single largest supporter of basic research in the physical sciences in the United States, the Office of Science is working to address some of the most pressing challenges of our time. For more information, please visit science.energy.gov.—by Ashley Huff