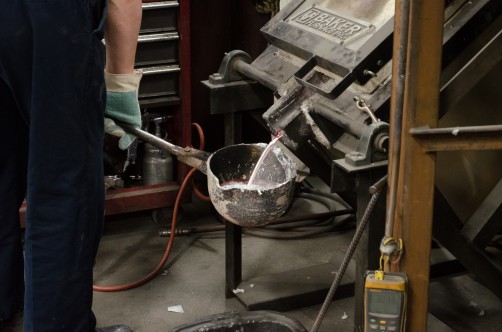 Alloyed metals being poured from a furnace into a ladle, to be used to fill molds. 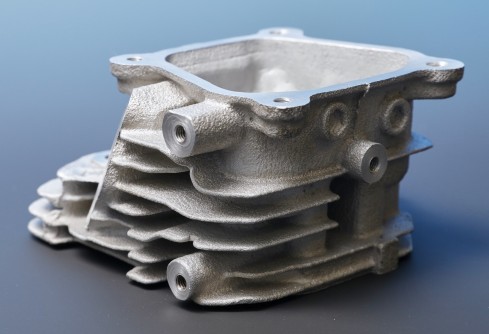 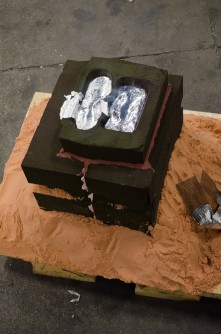 Green sand mold of an aerospace engine head. Molten metal is poured in and allowed to cool.

What may be more important, however, is that the alloys—which contain cerium—have the potential to jump-start the United States’ production of rare earth elements.

ORNL scientists Zach Sims, Michael McGuire and Orlando Rios, along with colleagues from Eck, LLNL and Ames Laboratory in Iowa, discuss the technical and economic possibilities for aluminum–cerium alloys in an article in JOM, a publication of the Minerals, Metals & Materials Society.

The team is working as part of the Critical Materials Institute, an Energy Innovation Hub created by the U.S. Department of Energy (DOE) and managed out of DOE's Advanced Manufacturing Office. Based at Ames, the institute works to increase the availability of rare earth metals and other materials critical for U.S. energy security.

Rare earths are a group of elements critical to electronics, alternative energy and other modern technologies. Modern windmills and hybrid autos, for example, rely on strong permanent magnets made with the rare earth elements neodymium and dysprosium. Yet there is no production occurring in North America at this time.

Aluminum–cerium alloys promise to boost domestic rare earth mining by increasing the demand and, eventually, the value of cerium.

“We have these rare earths that we need for energy technologies,” said Rios, “but when you go to extract rare earths, the majority is cerium and lanthanum, which have limited large-volume uses.”

If, for example, the new alloys find a place in internal combustion engines, they could quickly transform cerium from an inconvenient byproduct of rare earth mining to a valuable product in itself.

“The aluminum industry is huge,” Rios explained. “A lot of aluminum is used in the auto industry, so even a very small implementation into that market would use an enormous amount of cerium.” A 1 percent penetration into the market for aluminum alloys would translate to 3,000 tons of cerium, he added.

“Most alloys with exceptional properties are more difficult to cast,” said David Weiss, vice president for engineering and research and development at Eck Industries, “but the aluminum-cerium system has equivalent casting characteristics to the aluminum-silicon alloys.”

The key to the alloys' high-temperature performance is a specific aluminum-cerium compound, or intermetallic, which forms inside the alloys as they are melted and cast. This intermetallic melts only at temperatures above 2,000 degrees Fahrenheit.

That heat tolerance makes aluminum–cerium alloys very attractive for use in internal combustion engines, Rios noted. Tests have shown the new alloys to be stable at 300 degrees Celsius (572 degrees Fahrenheit), a temperature that would cause traditional alloys to begin disintegrating. In addition, the stability of this intermetallic sometimes eliminates the need for heat treatments typically needed for aluminum alloys.

Not only would aluminum-cerium alloys allow engines to increase fuel efficiency directly by running hotter, they may also increase fuel efficiency indirectly, by paving the way for lighter engines that use small aluminum-based components or use aluminum alloys to replace cast iron components such as cylinder blocks, transmission cases and cylinder heads.

Cutline 1: Alloyed metals being poured from a furnace into a ladle, to be used to fill molds. Image credit: Zachary Sims, ORNL 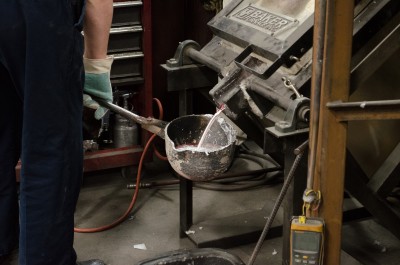 Caption: Alloyed metals being poured from a furnace into a ladle, to be used to fill molds. 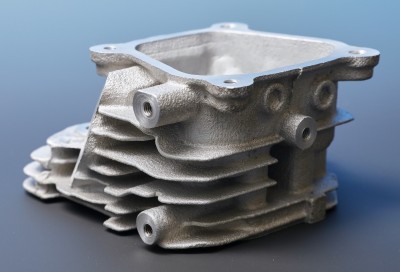 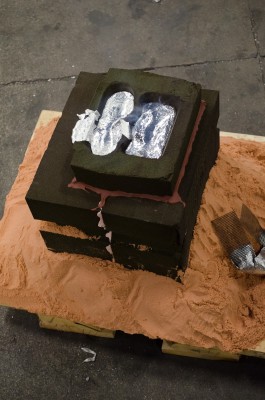 Caption: Green sand mold of an aerospace engine head. Molten metal is poured in and allowed to cool.