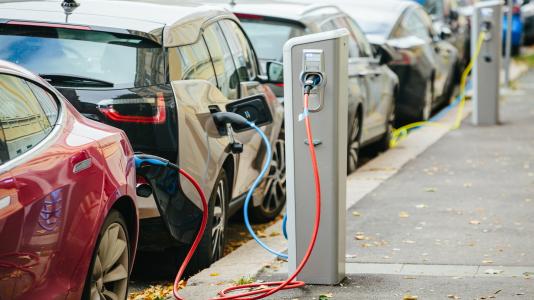 Newswise — A new model for the future of electric transportation

The ways in which we get around are changing, and they are likely to change even more in the coming years. The recent introduction of ride-sharing services and the emergence of electric vehicles have expanded our transportation options and required urban planners and utility companies to rethink how to equip our cities with the infrastructure necessary to support a new wave of disruptive technologies — from fast battery chargers to automated vehicles, to on-demand delivery of goods and services.

Consumers, and the host of stakeholder organizations that use or provide transportation services, will face new choices as these disruptive technologies are introduced and refined. These choices, in turn, will affect investors, companies and public agencies that provide the infrastructure and services to support our transportation system. Understanding and capturing the interactions between different agents who have evolving transportation demands and preferences is critical to aiding a smooth transformation of our transportation system.

“When you place chargers in particular locations, that not only influences driving behaviors but also impacts whether people are more likely to adopt electric vehicles.” — Yan (Joann) Zhou, group manager for Vehicle and Energy Technology and Mobility Analysis at Argonne

This model, called the Agent-based Transportation Energy Analysis Model (ATEAM), was developed as part of a research partnership between Argonne and Exelon, a major utility company. As both a grid operator and a power provider, Exelon was interested in understanding how electric vehicle adoption and the development of charging infrastructure would co-evolve spatially over a three- to 10-year time frame.

“People talk about electrification and how it’s likely to play an increasing role in transportation,” said Yan (Joann) Zhou, group manager for Vehicle and Energy Technology and Mobility Analysis at Argonne. ​“If there are a lot of electrified vehicles on the road, they could pose huge charging demands. But if you place chargers in particular locations, it can influence not only driving behavior but also whether people are more likely to adopt electric vehicles.”

In ATEAM, agents in different communities make decisions about whether or not to switch from internal combustion to electric vehicles. These decisions are based on many factors, including whether charging locations are near typical routes taken by drivers in the community. If the driver ​“sees” more chargers, he/she is more likely to switch over to an electric vehicle.

One unintentional drawback of this system comes from the fact that it could result in an inequitable distribution of chargers, in which wealthier neighborhoods have increasing access to charging infrastructure while poorer neighborhoods are left with a sparser network. According to Zhou, ATEAM gives researchers and urban planners the ability to tackle these issues directly by finding effective ways to balance social equity concerns.

Ultimately, the key to ATEAM, Zhou said, is that it addresses both sides of the electrification equation — modeling both investor behavior in setting up charging infrastructure as well as the response of consumers in deciding whether or not to obtain an electric vehicle.

ATEAM also offers flexibility and the potential for future refinements. Zhou and her colleagues are working with Exelon to diversify agent behavior — including seeing how consumers’ charging behavior is sensitive to the time of day and price of electricity. Additionally, the Argonne researchers seek to extend the model to locations outside the Chicagoland area.

Another factor compounding the complexity of ATEAM involves the introduction of electrified ride-sharing vehicles, which have different charging needs than private vehicles. ​“People who use ride-sharing vehicles are more likely to go to centralized downtown areas where it is harder to find parking, for instance,” Zhou said. ​“They tend to go to areas where demand is high, whereas private vehicles go to a more diverse set of locations.”

Finally, by examining trends from all 50 states over the past ten years, ATEAM provides insights into the potential growth in electrified transportation over the medium- to long-term. ​“Our analysis of trends from California, Norway and elsewhere,” Zhou said, ​“shows there’s still a lot of room for growth.”

Based on the successful partnership with Exelon that produced ATEAM, Argonne is looking to expand the model’s capabilities to predict and analyze electrified transportation behavior and infrastructure demand in other major cities. This initiative, called Compass, seeks to create new partnerships between the laboratory and other utilities that could follow the same general blueprint laid out by ATEAM.

Funding for research on ATEAM is provided by a multi-year partnership project with Exelon.