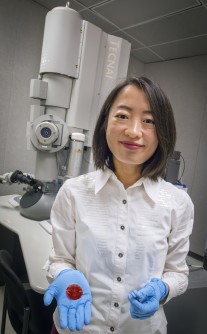 X. Chelsea Chen, a researcher at Berkeley Lab, holds a sample of a polymer membrane material that turned red when it soaked up a chemotherapy drug called doxorubicin. The material is designed to bind the drug, based on its electric charge, after the drug targets tumors and before it circulates throughout the body. 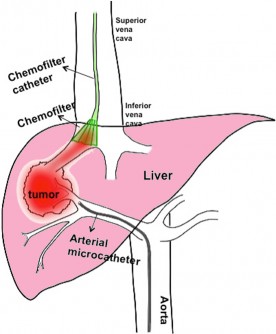 A ChemoFilter device (green) is inserted into a large vein to intercept a chemotherapy drug before it reaches the heart. The drug is delivered to a cancerous tumor in the liver by a tiny tube (middle and bottom) inserted in an artery. 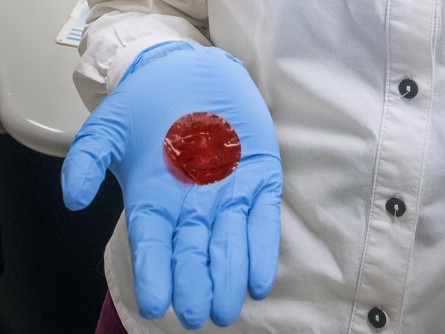 A close-up view of a sample of a polymer-based membrane material. The material, which originally had a light-yellow hue, turned red after soaking up a chemotherapy drug.

Newswise — Doctors have a powerful arsenal of cancer-fighting chemotherapy drugs to choose from, though a key challenge is to better target these drugs to kill tumors while limiting their potentially harmful side effects.

Now, researchers at the Department of Energy’s Lawrence Berkeley National Laboratory (Berkeley Lab) are helping to develop and test materials for a new device that can be inserted via a tiny tube into a vein and soak up most of these drugs like a sponge. That’s after a separate tube delivers a more concentrated dose to tumors—and before the drugs can widely circulate in the bloodstream.

Researchers say the drug-capture system could also potentially be applied to antibiotic treatments in combating dangerous bacterial infections while limiting their side effects.

From Fuel Cell to Cancer Treatment

X. Chelsea Chen, a postdoctoral researcher working in the Soft Matter Electron Microscopy program in Berkeley Lab’s Materials Sciences Division, had been investigating polymer membranes—which help current to flow in a fuel cell that converts hydrogen and oxygen into electricity—when she learned about the concept for this new type of medical device.

She saw that the proposed drug-capture device could benefit from the same property in the fuel cell material, which allows it to attract and capture certain molecules by their electric charge while allowing other types of molecules to flow through.

“We used to use this material for transporting protons in a fuel cell,” Chen said. “I was really excited when I found out this could be used for chemotherapy—this was branching out in a totally different direction.”

The polymer material includes polyethylene, which is strong and flexible and is used for garbage bags, and another polymer containing sulfonic acid, which has a negative electric charge.

Certain types of chemotherapy drugs, such as doxorubicin, which is used to treat liver cancer, have a positive charge, so the polymer material attracts and binds the drug molecules. “In our lab experiments, the current design can absorb 90 percent of the drug in 25-30 minutes,” Chen said.

That is important, since an increasingly popular liver-cancer treatment, known as TACE, can allow up to half of the chemotherapy dose to reach the rest of the body even though it is intended to reduce its circulation.

Removing a toxin after tumor treatment

“Doxorubicin has been around for decades. It is very well understood, and it is also very toxic,” said Steven Hetts, an associate professor of radiology at UC San Francisco and an interventional neuroradiologist at the UCSF Medical Center who conceived of the new treatment system, called ChemoFilter. “If you get exposed to too much, when it goes through the heart you can go into heart failure.” So doctors are very careful with the dose.

Hetts specializes in treating eye tumors by navigating a tube, called a catheter, from the femoral artery in the thigh to the opthalmic artery that supplies blood to the affected eye, and pumping chemotherapy medication through the catheter to the tumor.

“You can get very high concentrations of that chemotherapy in the eye and relatively low concentrations in the rest of the body, but some will wash through the eye and into the veins in the head,” Hetts said, “so you can have side effects from that.”

Hetts began to question, “Is there a way to drain, to remove that excess drug before it has side effects? If you can remove a lot of the drug, you could escalate the dose of the drug you can give, for better tumor control and potentially a cure—and you could basically eliminate any side effects.

“It occurred to me that maybe we could navigate a separate catheter into the vein that drains the blood, and have a material that binds up any excess chemotherapy,” he said.

While the eye cancers he treats are rare—there are several hundred children per year in the U.S. who are affected by this kind of tumor—he saw a parallel need to improve the treatment options for liver cancer, which is far more pervasive: It is the third-leading cause of cancer deaths globally, with an estimated half a million new cases each year.

Bringing a medical device from drawing board to market

In 2013 his staff reached out to Nitash Balsara, a senior scientist at Berkeley Lab and a chemical engineering professor at UC Berkeley and lead-PI of the Soft Matter Electron Microscopy program in Berkeley Lab’s Materials Sciences Division, to pursue the idea, and Chen began to work on materials based on Hetts’ concept. The research team received a patent for a ChemoFilter system in April.

The patented device features a nickel-titanium metal frame in a collapsible flower-petal array, attached to a thin polymer membrane that can be expanded out from a catheter to absorb a drug. In a preclinical study, a ChemoFilter device was inserted into a pig and was found to reduce the peak concentration of the chemotherapy drug doxorubicin by about 85 percent.

The device will hopefully find use in human cancer treatment within a couple of years, Hetts said.

Chen and other researchers are also working on next-generation ChemoFilter devices that use a different mix of materials and different methods to remove drugs from the body, though those will likely take longer to receive federal approval for use.

Researchers at Caltech in Pasadena, Calif., are working to coat the ChemoFilter membranes with DNA segments that can bind with specific drug molecules. “DNA could be great to remove a lot of different chemotherapy drugs,” Hetts said.

The membranes could also be designed to capture antibiotics to treat potentially deadly infections from anthrax and other bacteria, and there are many applications in veterinary medicine, too, he said.

She also uses the Foundry’s National Center for Electron Microscopy and conducts X-ray experiments at the lab’s Advanced Light Source and SLAC National Accelerator Laboratory’s Stanford Synchrotron Radiation Lightsource to study the nanostructure of the polymer materials she develops, and to better understand the drug-capture mechanism at microscopic scales and inform new designs.

“Without these awesome images from the Foundry and ALS, we wouldn’t know how to optimize the performance of the materials,” Chen said.

“We are actively searching for new materials and mechanisms” for the polymer membranes, she added. Researchers are exploring the use of 3-D-printed materials, for example, that can be coated with charged particles to attract and bind drug molecules.

Stephen Solomon, chief of Interventional Radiology Service at Memorial Sloan Kettering Cancer Center in New York, said the application of the TACE procedure has been increasing since the late ’90s, and it has been shown to extend patient survival for those with liver cancer.

Solomon said he was familiar with the general concept of the ChemoFilter system: “One of the goals of any procedure involving chemotherapy is to minimize toxicity outside of the targeted organ, and the hope of this technology is to limit such toxicity.”

Hetts said he looks forward to the development of more “cutting-edge” versions of ChemoFilter devices that are tailored to a wide range of treatments.

“This project has moved forward nicely and I’m really impressed,” he said. “It’s been a great experience in coming together to create these devices, and I’m looking forward to continuing it.”

This work is supported by the DOE Office of Science and the National Institutes of Health. Learn more about the work conducted by Nitash Balsara’s research group: http://www.cchem.berkeley.edu/npbgrp/. 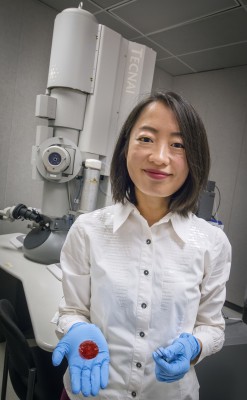 Caption: X. Chelsea Chen, a researcher at Berkeley Lab, holds a sample of a polymer membrane material that turned red when it soaked up a chemotherapy drug called doxorubicin. The material is designed to bind the drug, based on its electric charge, after the drug targets tumors and before it circulates throughout the body. 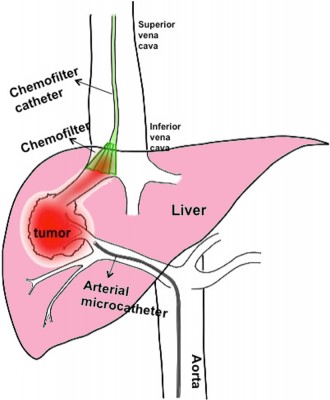 Caption: A ChemoFilter device (green) is inserted into a large vein to intercept a chemotherapy drug before it reaches the heart. The drug is delivered to a cancerous tumor in the liver by a tiny tube (middle and bottom) inserted in an artery. 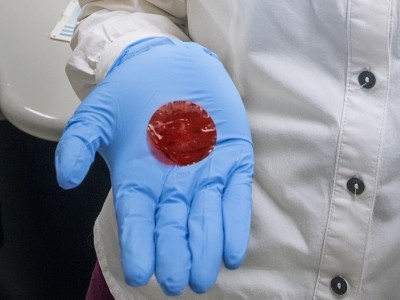 Caption: A close-up view of a sample of a polymer-based membrane material. The material, which originally had a light-yellow hue, turned red after soaking up a chemotherapy drug.