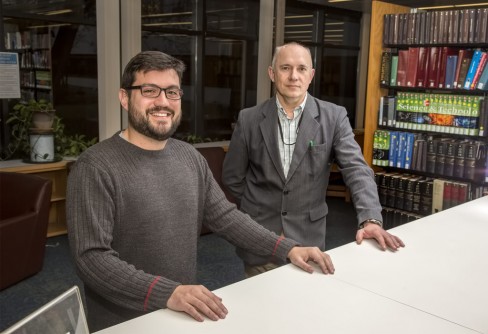 PPPL physicists Vinícius Duarte, left, and Nikolai Gorelenkov have used a simple insight to capture the complex effects of many high-frequency waves in a fusion plasma.

Newswise — Scientists often make progress by coming up with new ways to look at old problems. That has happened at the U.S. Department of Energy’s (DOE) Princeton Plasma Physics Laboratory (PPPL), where physicists have used a simple insight to capture the complex effects of many high-frequency waves in a fusion plasma. These waves can force hot particles to escape from a fusion reactor, potentially impairing fusion energy production and damaging the reactor walls.

Fusion, the power that drives the sun and stars, is the fusing of light elements in the form of plasma — the hot, charged state of matter composed of free electrons and electrically charged atoms, or ions — that generates massive amounts of energy. Scientists are seeking to replicate fusion on Earth for a virtually inexhaustible supply of power to generate electricity.

This work has led to the creation of a computer code that can quickly calculate how these waves eject particles from fusion facilities known as tokamaks, causing the loss of plasma heat and making fusion reactions less efficient. “The purpose of this research is to figure out how to close this loss path for high-energy particles,” said Nikolai Gorelenkov, PPPL physicist and lead author of the paper reporting the results in Physics of Plasmas.

The key result and resulting code were validated using data from experiments performed on the DIII-D National Fusion Facility that General Atomics operates for the DOE.

The calculations take just a few minutes – previous codes required many hours or days, if not weeks — allowing scientists to more easily assess a variety of conditions with the goal of determining a tokamak’s optimal operating state. Understanding how to minimize hot-particle losses caused by these waves will be crucial for ITER, the international tokamak being constructed in France to demonstrate the practicality of fusion energy.

The new code simulates how quick-moving ions interact with plasma instabilities that produce waves that ripple through the plasma and move hot particles from the plasma’s innards to its colder edges, and sometimes out of the tokamak entirely. Scientists want to keep the hot particles in the center where they can warm the rest of the particles like embers in a fire, increasing the efficiency of the fusion reactions. Fast and accurate simulations could allow physicists to change plasma conditions to keep those embers in place.

The computer program, known as the resonance-broadened quasi-linear (RBQ) code, takes into account more than one wave-causing instability at a time. It efficiently tracks the movement of plasma particles as they interact with waves and flow from one part of the plasma to another.

The process simulates the journey of the particles. “An analogy is following the path of a train as it travels from station to station,” said Vinícius Duarte, a physicist at PPPL and co-author of the paper. “Imagine you want to track the motion of the train. You don’t have to know each wiggle of the track. You just have to know in a general way how the train’s position changes from one stage of its journey to the next.”

The new code runs faster than previous codes and could be used to study a wide range of plasma phenomena. Researchers now plan to update the code to enable it to model more aspects of fusion plasma. “We have been building this house brick-by-brick, increasing our understanding of these phenomena, for several years now,” said Duarte. “RBQ has been tested against other codes and experiments and we are confident that we will continue to make progress.”

Members of this research team included scientists from PPPL and General Atomics. Support for this research was provided by the DOE’s Office of Science.