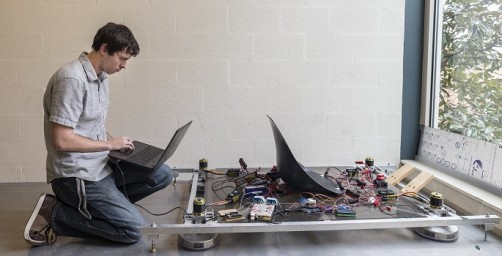 Tim Potteiger, a Ph.D. student in electrical engineering, tests his battery-switching device on a levitating electric vehicle in the School of Engineering.

Newswise — Nissan Leafs, which go about 107 miles on a charge, sometimes end up relegated to commuter cars due to battery-range worries. The mass-market, standard Tesla Model 3 can go double that but still can be disconcerting on long road trips.

Both batteries could work up to 50 percent longer with a device provisionally patented by Vanderbilt University’s Ken Pence, professor of the practice of engineering management, and Tim Potteiger, a Ph.D. student in electrical engineering. It reconfigures modules – clusters of battery cells -- in electric cars to be online or offline depending on whether they’re going to pull down the other modules.

The two used the open-source Tesla high-density, lithium-ion battery to model their method of improving durability and increasing range, adding a controller to each of the battery’s cells.

“We know there are some battery cells that run out of juice earlier than others, and when they do, the others run less efficiently,” Potteiger said. “We make sure they all run out of energy at the same time, and there’s none left over.”

With both the Tesla and Nissan battery packs’ current configuration, gauges give a worst-case scenario on the amount of power left so that users don’t get stranded. That means they commonly show empty with 10 percent or more power left, Potteiger said. Their device also can connect to electric cars’ software for a more accurate read that allows drivers to get the most range out of a charge.

The older the batteries are, the more likely they are to experience problems making them less efficient, and the more useful the team’s device becomes, Pence said. “They’ll have a longer useful service life,” Pence said. “Drivers won’t see the 50 percent return immediately, but they will later on in the life of the battery.”

The device is the result of lessons learned from an engineering class’s levitating, one-seat vehicle and a grad student’s NASA internship.

Pence’s project management graduate class last year succeeded in building a working vehicle that uses magnets to levitate a few inches off an aluminum track. Batteries that ran down too quickly proved a major challenge.

When Potteiger returned from his fall 2016 NASA internship, he was eager to use what he’d learned in real-time prognostics: figuring out how much energy, say, a rocket or surface-roving device has left and how efficiently it’s working. He heard some teaching assistants discussing Pence’s levitation vehicle and started out volunteering to make a gauge for it.

Instead, the duo ended up with the battery switcher and are working with the Vanderbilt Center for Technology Transfer and Commercialization to get it to market.