New Director Says Sandia Will Respond to Whatever Future Brings 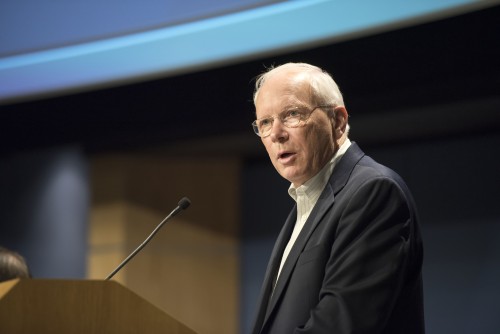 Sandia National Laboratories’ Director Steve Younger addresses the workforce May 1, his first day as head as the laboratory. Younger said Sandia is working on exciting technology in such areas as microelectronics fabrication, high-energy-density physics, high-performance computing and cybersecurity.

“I see those continuing,” Director Steve Younger said at a news conference on his first day as Sandia’s 15th director. “However, we are in what I call a strategic time, a rapidly changing time. Sandia will maintain its flexibility in responding to that somewhat uncertain future. It is going to be an exciting future for the lab as we respond to upcoming national needs.”

Younger spent his first morning as a Sandia employee on the front steps of the administration building, greeting his new co-workers as they arrived for work. He then addressed the Sandia workforce at the labs’ main auditorium.

The National Nuclear Security Administration in December awarded the laboratories’ management contract to National Technology and Engineering Solutions of Sandia. The wholly owned subsidiary of Honeywell International Inc. on Monday became Sandia’s third manager since the laboratories’ founding in 1949. It succeeded Lockheed Martin Corp., which had operated Sandia since 1993.

Deputy Director Dave Douglass, who also spoke to reporters, said Sandia will maintain its strong support for technology transfer to the private sector and its relationships with businesses and the community. Sandia spends roughly $1 billion on goods and services nationwide each year, with about half of that going to small businesses.

“Sandia is an extremely important member of the community, both through the dollars we contribute and the time our employees contribute,” Douglass said. “It is our intent to continue that.”

Younger said he expects stable employment numbers and that the challenge will be to do the work the nation has asked Sandia to do with the people it has.

Sandia is pursuing exciting technology and hopes to expand some of those areas, he said. As examples, he mentioned work in microelectronics fabrication, high-energy-density physics at Sandia’s Z machine, high-performance computing and cybersecurity.

Younger called Sandia “the greatest engineering lab in the world,” and said that while many companies and laboratories work in technology, “Sandia defends the planet.”

As the engineering lab for the nation’s nuclear weapons complex, Sandia is responsible for more than 95 percent of non-nuclear components and for maintaining, modernizing and assessing the nuclear weapons stockpile. It also engineers systems and technologies for global security, defense systems and energy, and does fundamental science and engineering research in bioscience, computing, engineering, geoscience, materials, nanosystems and high-energy density science.

Younger and Douglass have spent decades in national security. Younger has 34 years of experience at the Nevada National Security Site, Los Alamos National Laboratory, Lawrence Livermore National Laboratory and as director of the Defense Threat Reduction Agency. Douglass has 35 years of experience, much at the executive level, with Honeywell and the Kansas City National Security Campus, which manufactures and procures non-nuclear components for nuclear weapons to support Sandia and other sites.