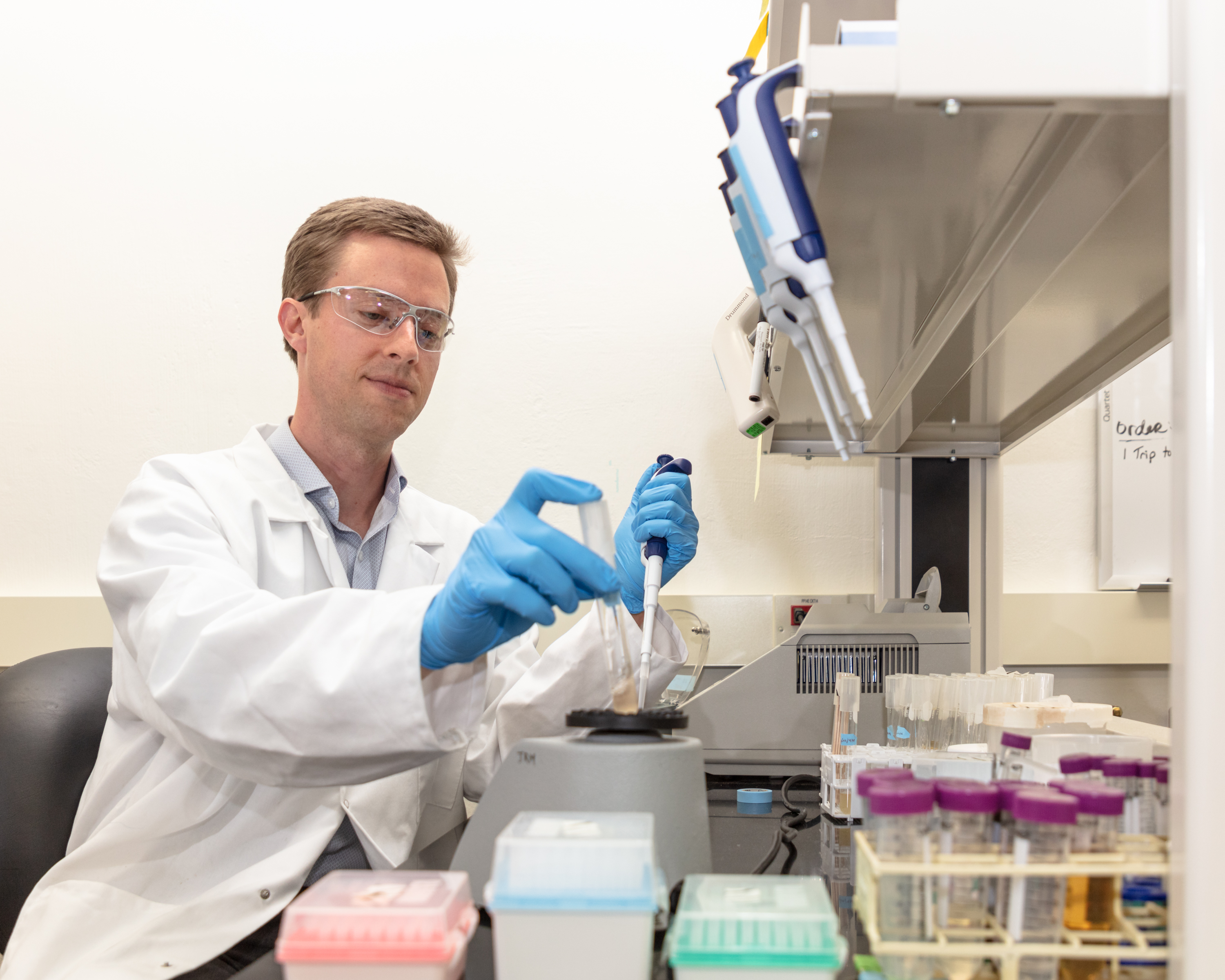 ORNL’s Josh Michener, a microbiologist and metabolic engineer, led the discovery of a useful new enzyme that breaks down stubborn bonds in lignin, a polymer found in plants that typically becomes waste during bioconversion. 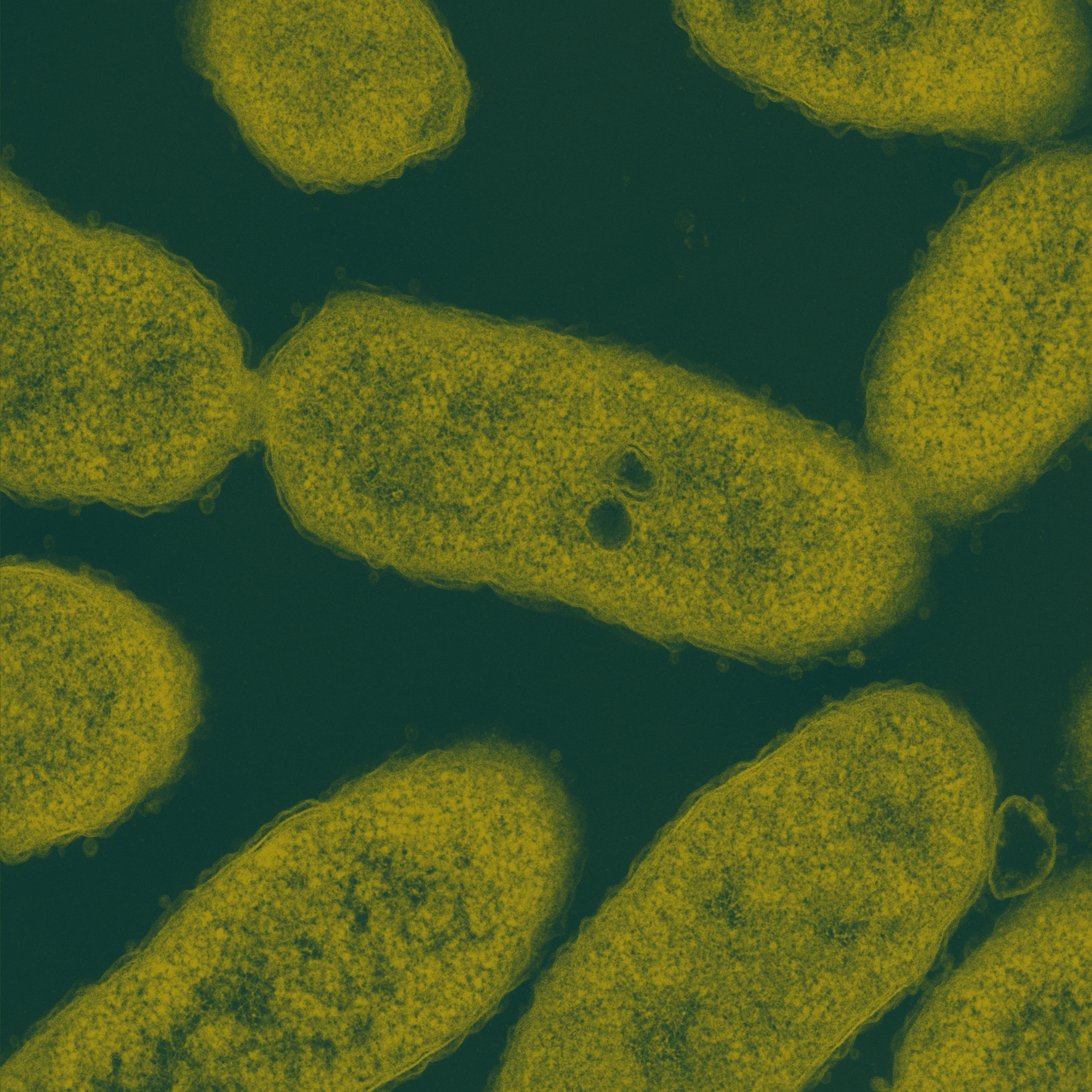 Researchers discovered the enzyme, named LsdE, in the bacterium Novosphingobium aromaticivorans, pictured, a microbe of interest in lignin valorization.

Newswise — In a step toward increasing the cost-effectiveness of renewable biofuels and bioproducts, scientists at Oak Ridge National Laboratory discovered a microbial enzyme that degrades tough-to-break bonds in lignin, a waste product of biorefineries.

When inserted into a bioengineered bacterium, the enzyme helps efficiently convert lignin compounds into a common component of plastics, opening a pathway to transform waste into a commercially valuable biochemical.

“Lignin is a really complicated polymer,” said Josh Michener, who led ORNL’s research as detailed in Metabolic Engineering. The polymer, which contributes to the structural rigidity of plants, consists of useful monomer units held together by weak and strong bonds. With lignin comprising 20% to 30% of plant biomass by weight, breaking the polymer’s strong bonds and converting the chemicals they link together into value-added products is necessary to make the production of plant-based biofuels and products economically viable.

Diverse communities of bacteria and fungi perform these processes in nature, but maintaining a mix of so many different microbes in one bioreactor can be tricky. To solve this problem, ORNL scientists in the Center for Bioenergy Innovation, or CBI, want to identify the enzymes that microbes use to degrade specific bonds in lignin and engineer the genes that code for those enzymes into a single organism.

The team used the bacterium Novosphingobium aromaticivorans, a microbe of interest in lignin valorization. After identifying and cultivating a mutant N. aromaticivorans strain that efficiently degraded the desired linkage in DGPD, the researchers used bacterial genetics and gene disruption techniques to find which enzyme was responsible.

To their surprise, the enzyme they identified – which they named LsdE – had been labeled as a hypothetical protein, meaning its function was unknown.

“No one had seen this kind of chemistry before,” Michener said. “There weren't any examples in the literature of a single enzyme that could do this particular transformation.”

The discovery was made possible by the ORNL team’s genome-scale approach. Biology techniques frequently rely on homology, a method of examining enzymes that appear similar to those with known functions. However, Michener noted, “When we're looking for a hypothetical protein that's never been described, we can't find it by homology.”

Instead, the team used genetic techniques that allowed them to find leads by looking broadly across the N. aromaticivorans genome. They then constructed a set of mutant microbes, each with a single gene disrupted. Collectively, every nonessential gene was disrupted in at least one of these mutants.

If the mutant microbe lost its ability to break down the DGPD dimer when a certain gene was removed, the researchers could determine that the enzyme encoded by that gene was responsible for the degradation, without needing to know its function beforehand.

“In this case, there was no reason we'd ever look at LsdE and say obviously this enzyme does that reaction,” Michener said. “That was one of the most exciting parts – and the fact that we have methods in place to make those kinds of discoveries.”

In a different microbe, new possibilities

After identifying LsdE, the ORNL team tested to see if they could further validate its function. Their test confirmed the role of LsdE and revealed that a better-known enzyme, LsdA, played a complementary role in further breaking down DGPD into useful compounds.

At the National Renewable Energy Laboratory, a project partner in CBI, scientists inserted both enzymes into a strain of the bacterium Pseudomonas putida that had already been engineered to produce muconic acid, a value-added precursor for plastics. They found that adding the enzymes enabled P. putida to convert DGPD into muconic acid at a nearly 100% yield.

“With many products, you’re losing carbon along the way,” said Allison Werner, a postdoctoral researcher at NREL and co-author on the study. “But in this case, we have a very efficient pathway.”

“To the best of our analytical capabilities, every molecule of the dimer that we started with was converted into two molecules of the product, which is pretty phenomenal,” Michener said.

This work is part of a larger effort to convert lignin into value-added products. Future research will aim to discover new enzymes that break down other tough linkages and to better understand the chemical structure of LsdE.

Co-authors on the study include Gerald Presley and Richard Giannone of ORNL; David Garcia of the University of Tennessee; and Rui Katahira, Stefan Haugen, Kelsey Ramirez and Gregg Beckham of NREL.

The research began under DOE’s BioEnergy Science Center and continued under the Center for Bioenergy Innovation, supported by the Office of Biological and Environmental Research within DOE’s Office of Science. This study and continued research are funded in part by a DOE Early Career Award granted to Josh Michener for the proposal “Systems Metabolic Engineering of Novosphingobium aromaticivorans for Lignin Valorization.” DOE’s Office of Energy Efficiency and Renewable Energy, Bioenergy Technologies Office also contributed to work conducted at NREL.

UT-Battelle manages ORNL for the Department of Energy’s Office of Science, the single largest supporter of basic research in the physical sciences in the United States. The Office of Science is working to address some of the most pressing challenges of our time. For more information, please visit energy.gov/science. — Abby Bower

Caption: ORNL’s Josh Michener, a microbiologist and metabolic engineer, led the discovery of a useful new enzyme that breaks down stubborn bonds in lignin, a polymer found in plants that typically becomes waste during bioconversion.

Caption: Researchers discovered the enzyme, named LsdE, in the bacterium Novosphingobium aromaticivorans, pictured, a microbe of interest in lignin valorization.