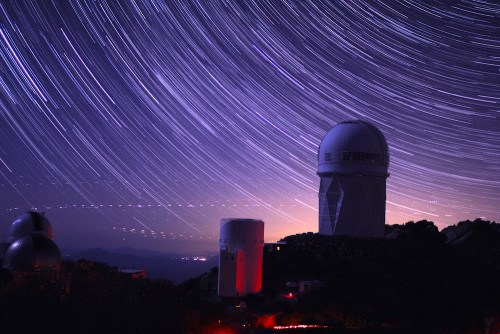 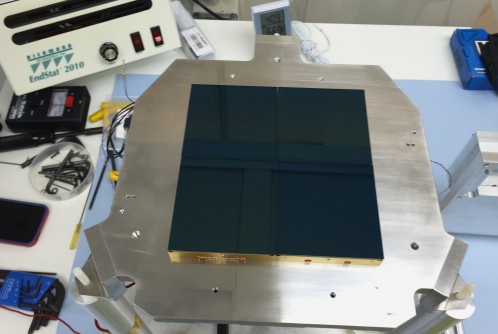 A view of the Berkeley Lab-designed light sensors, known as charge-coupled devices or CCDs, that allow the Mosaic-3 camera to capture infrared light from distant galaxies. 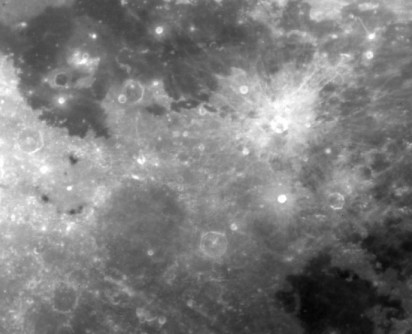 The moon, as seen in the infrared with the new Mosaic-3 camera on the Mayall Telescope at Kitt Peak National Observatory. This zoom view resolves features as small as one mile. Mosaic-3’s primary mission for the next two years is to scan about one-eighth of the sky, collecting infrared images of millions of galaxies and stars. 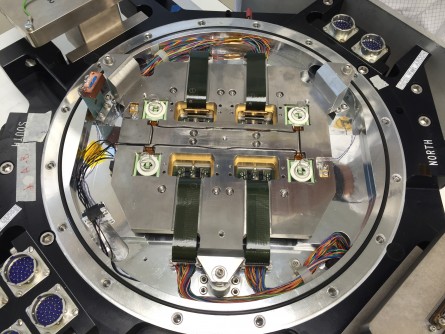 A view of the focal plate for the Mosaic-3 camera.

Newswise — A newly upgraded camera that incorporates light sensors developed at the U.S. Department of Energy’s Lawrence Berkeley National Laboratory (Berkeley Lab) is now one of the best cameras on the planet for studying outer space at red wavelengths that are too red for the human eye to see.

Very distant astronomical objects appear much redder when observed on Earth due to an effect known as redshift, so this sensitivity to red light enables the camera to detect objects many billions of light years away.

The camera has begun its two-year mission to quickly survey the sky, amassing images of hundreds of millions of galaxies and stars.

The rebuilt camera, dubbed Mosaic-3, was installed in October on the 4-meter Mayall telescope at Kitt Peak National Observatory near Tucson, Ariz. It will survey the northern sky at infrared wavelengths from 850 nanometers to 1 micron, a range known as the “z-band.”

Mosaic-3 will capture images nearly twice as fast as its predecessor camera, and can see galaxies 10 times fainter than those detected in a previous survey called the Sloan Digital Sky Survey.

Mosaic-3 is the product of a small collaboration of scientists and engineers at Berkeley Lab, Yale University, and the National Optical Astronomy Observatory (NOAO).

It will help to scout out galaxies that can be targeted for further observations by DESI, the Dark Energy Spectroscopic Instrument, which is scheduled to be installed on the Mayall telescope in 2018.

DESI, which will be built by a Berkeley Lab-led collaboration, will produce a 3-D map of the universe out to a distance of 12 billion light years. By measuring the velocities of millions of galaxies and extremely bright and distant objects known as quasars, DESI will chronicle the expansion history of the universe to unprecedented precision. It will yield a better understanding of “dark energy,” a mysterious form of energy that is causing this universal expansion to accelerate.

Mosaic-3’s primary mission is to carry out a survey of roughly one-eighth of the sky (5,500 square degrees). This survey, known as the Mayall z-Band Legacy Survey (MzLS), will span about 220 nights of observations this year and next, and all of the camera’s data will be immediately available to the public. During the remaining nights, Mosaic-3 will be available to astronomers for other research.

The z-band survey is just one layer in the galaxy survey that is locating targets for DESI. Data from this survey are being combined with data from other telescopes to produce images of galaxies in many colors, and the combined data will be publicly released twice per year on the Legacy Survey website.

The Mosaic-3 camera is an upgrade that brings new cutting-edge sensors developed at Berkeley Lab to an existing, decade-old camera at the Mayall Telescope. The cryostat (a device used to maintain a supercool temperature) from this camera was refurbished to incorporate the new light sensors, and the electronics were replaced.

“We rebuilt the whole camera,” said Charles Baltay, a Yale physics professor who oversaw the university’s work on Mosaic-3. “We started in early February and delivered it in August—we had to hustle. At first, people said we couldn’t do it this fast.”

He added, “Mosaic-3 can measure the same object in half the time compared to its predecessor. It allows us to do the target-selection survey in time—it moves it from impossible to comfortable.”

Berkeley Lab supplied the charge-coupled devices (CCDs) that capture light and the readout system that translates the light into images, and Yale was responsible for new mechanical components and software. David Rabinowitz at Yale oversaw the software development, working closely with NOAO astronomers and engineers.

The large pixel size and overall CCD size are key in gathering light, and the 0.5-millimeter thickness of the CCDs helps the CCDs see deeper into the infrared wavelengths.

Steve Holland, an engineer at Berkeley Lab who invented these red-sensitive CCDs, said he was already engaged in the design of similar CCDs for the DESI project when Mosaic-3 launched. “It was serendipitous,” he said.

Christopher Bebek, who manages Berkeley Lab’s CCD group and served as the lab’s liaison on the Mosaic-3 project, added, “This was like a dress rehearsal for detectors and electronics for DESI.” An updated CCD design is now in production for DESI, which will require 20 of these CCDs for its spectrograph system.

The Mosaic-3 instrument upgrade was funded by the U.S. Department of Energy Office of Science through the DESI project, and by NOAO. The DESI project is managed by the Lawrence Berkeley National Laboratory. 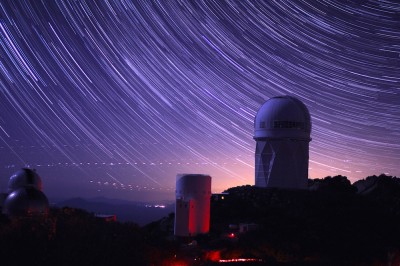 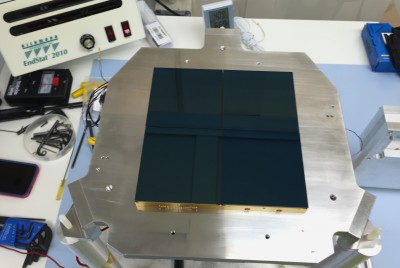 Caption: A view of the Berkeley Lab-designed light sensors, known as charge-coupled devices or CCDs, that allow the Mosaic-3 camera to capture infrared light from distant galaxies. 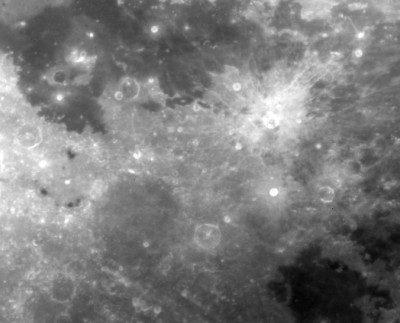 Caption: The moon, as seen in the infrared with the new Mosaic-3 camera on the Mayall Telescope at Kitt Peak National Observatory. This zoom view resolves features as small as one mile. Mosaic-3’s primary mission for the next two years is to scan about one-eighth of the sky, collecting infrared images of millions of galaxies and stars. 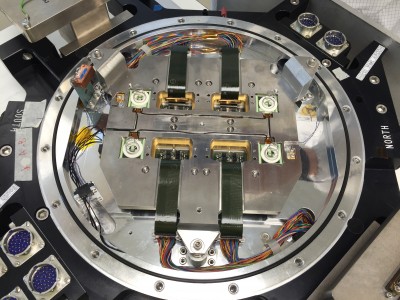 Caption: A view of the focal plate for the Mosaic-3 camera.