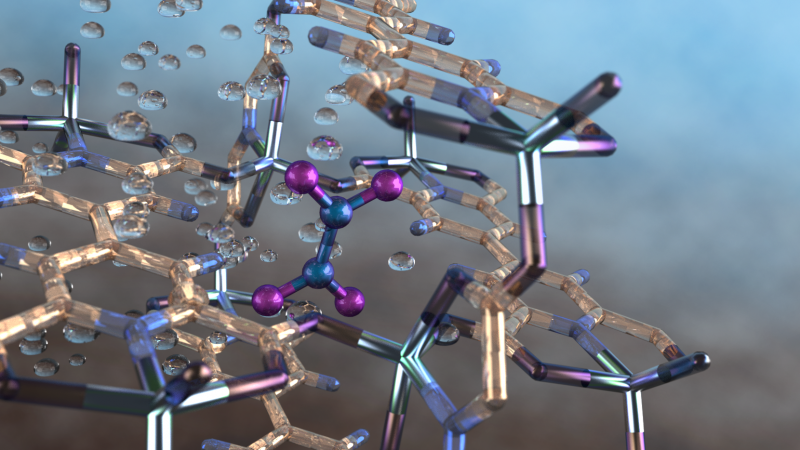 Illustration of a nitrogen dioxide molecule (depicted in blue and purple) captured in a nano-size pore of an MFM-520 metal-organic framework material as observed using neutron vibrational spectroscopy at Oak Ridge National Laboratory. 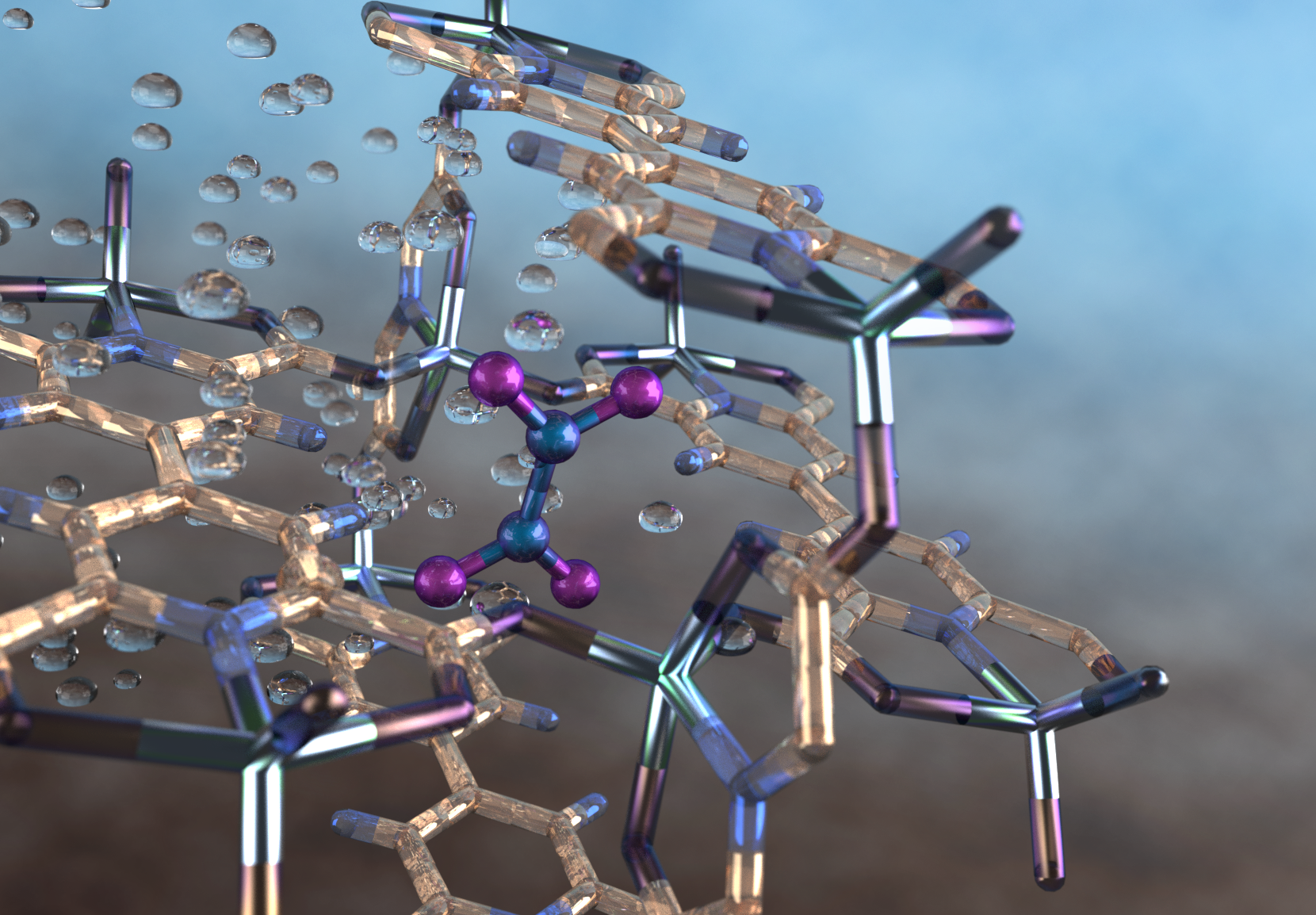 Newswise — An international team of scientists, led by the University of Manchester, has developed a metal-organic framework, or MOF, material that provides a selective, fully reversible and repeatable capability to capture a toxic air pollutant, nitrogen dioxide, produced by combusting diesel and other fossil fuels.

The material then requires only water and air to convert the captured gas into nitric acid for industrial use. The mechanism for the record-breaking gas uptake by the MOF, characterized by researchers using neutron scattering at the Department of Energy’s Oak Ridge National Laboratory, could lead to air pollution control and remediation technologies that cost-effectively remove the pollutant from the air and convert it into nitric acid for use in producing fertilizer, rocket propellant, nylon and other products.

As reported in Nature Chemistry, the material, denoted as MFM-520, can capture atmospheric nitrogen dioxide at ambient pressures and temperatures—even at low concentrations and during flow—in the presence of moisture, sulfur dioxide and carbon dioxide. Despite the highly reactive nature of the pollutant, MFM-520 proved capable of being fully regenerated multiple times by degassing or by treatment with water from the air—a process that also converts the nitrogen dioxide into nitric acid.

“To our knowledge, this is the first MOF to both capture and convert a toxic, gaseous air pollutant into a useful industrial commodity,” said Sihai Yang, one of the study’s lead authors and a senior lecturer at Manchester’s Department of Chemistry. “It is also interesting that the highest rate of NO2 uptake by this material occurs at around 113 degrees Fahrenheit (45 degrees Centigrade), which is about the temperature of automobile exhausts.”

Martin Schröder, a lead author of the study, professor of chemistry and vice-president of the University of Manchester, said, “The global market for nitric acid in 2016 was USD $2.5 billion, so there is a lot of potential for manufacturers of this MOF technology to recoup their costs and profit from the resulting nitric acid production. Especially since the only additives required are water and air.”

As part of the research, the scientists used neutron spectroscopy and computational techniques at ORNL to precisely characterize how MFM-520 captures nitrogen dioxide molecules.

“This project is an excellent example of using neutron science to study the structure and activity of molecules inside porous materials,” said Timmy Ramirez-Cuesta, co-author and coordinator for the chemistry and catalysis initiative at ORNL’s Neutron Sciences Directorate. “Thanks to the penetrating power of neutrons, we tracked how the nitrogen dioxide molecules arranged and moved inside the pores of the material, and studied the effects they had on the entire MOF structure. What made these observations possible is the VISION vibrational spectrometer at ORNL’s Spallation Neutron Source, which has the highest sensitivity and resolution of its kind in the world.”

The ability of neutrons to penetrate solid metal to probe the interactions between the nitrogen dioxide molecules and MFM-520 is helping the researchers validate a computer model of MOF gas separation and conversion processes. Such a model could help predict how to produce and tailor other materials to capture a variety of different gases.

"Neutron vibrational spectroscopy is a unique tool to study adsorption and reaction mechanisms and guest–host interactions at the molecular level, especially when combined with computer simulation,” said Yongqiang Cheng, an ORNL neutron scattering scientist and co-author. “The interaction between the nitrogen dioxide molecules and MOF causes extremely small changes in their vibrational behavior. Such changes can only be recognized when the computer model accurately predicts them.”

“The characterization of the mechanism responsible for the high, rapid uptake of NO2 will inform future designs of improved materials to capture air pollutants,” said Jiangnan Li, first author and doctoral student at the University of Manchester. “The post-treatment of the captured nitrogen dioxide avoids the need to sequester or process the gas and provides future direction for clean air technologies.”

Capturing greenhouse and toxic gases from the atmosphere has been a challenge because of their relatively low concentrations and because water in the air competes with and can often negatively affect the separation of targeted gas molecules from other gases. Another issue was finding a practical way to filter out and convert captured gases into useful, value-added products. The MFM-520 MOF material offers solutions to many of these challenges.

The neutron research was supported by the Department of Energy’s Office of Science and used the Integrated Computer Environment Modeling and Analysis for Neutron data software program funded by the Laboratory Directed Research and Development program at ORNL.

The Spallation Neutron Source is a DOE Office of Science User Facility. UT-Battelle LLC manages ORNL for DOE’s Office of Science. The Office of Science is the single largest supporter of basic research in the physical sciences in the United States and is working to address some of the most pressing challenges of our time. For more information, please visit http://science.energy.gov/.

The University of Manchester’s research has real-world impact beyond academia. From tackling cancer and poverty to finding the energy solutions of the future, our research is making a real difference to the quality of people’s lives across the globe. For more information about the Nature Chemistry study and MOF gas separation research, visit https://www.chemistry.manchester.ac.uk/connect/.