Researchers can precisely study how different genes affect key properties in a yeast used industrially to produce fuel and chemicals. 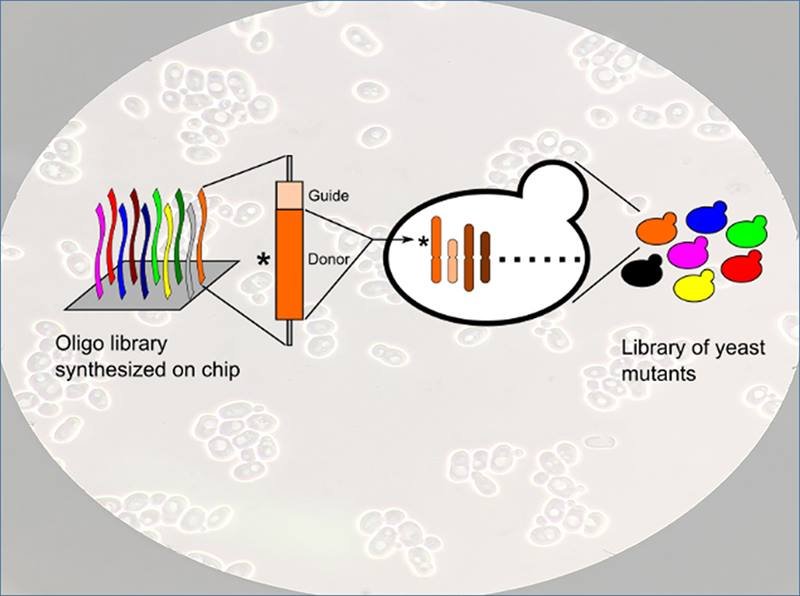 A genome-wide CRISPRCas9- and homology-directed-repair-assisted genome-scale engineering (CHAnGE) library can be synthesized, cloned, and delivered to yeast cells. The resulting yeast mutant library can be used for high-throughput screening of microbial cell factories.

How do you make yeast work harder? Not to make bread, but in processes that yield chemicals and pharmaceuticals. Industries currently use a yeast called Saccharomyces cerevisiae. They’d like it to work better. The answer is in manipulating the yeast’s genetic code. To get at that code, researchers developed a method that turns off targeted genes in the yeast, introducing mutations. The team’s approach deletes specific points in the DNA sequence. They study how each deletion affects the yeast. Does a deletion cause the yeast to stop working in certain chemicals? Does a deletion make the yeast grow more slowly? The team’s approach lets them study each gene, as well as in combination with other genes. With this approach, scientists can construct libraries of mutants for use in discovering how each gene works.

Libraries of genetic mutations have so far only been achieved in simpler organisms, specifically prokaryotes. Now, scientists can build such libraries for more complex organisms. The new technique lets scientists rapidly engineer tens of thousands of genes. They can target the genes with 98 percent efficiency. The results ease identifying and isolating mutant strains that show desired traits, such as tolerance to toxic compounds necessary to produce industrial products.

Researchers developed a method called CRISPRCas9- and homology-directed-repair-assisted genome-scale engineering (CHAnGE) using libraries of synthetic oligonucleotides (cassettes) containing a CRISPR guide sequence, gene-specific sequences to target homologous recombination to those selected genes, and unique barcodes to track each mutant strain. The oligonucleotide library was cloned into a plasmid and introduced into Saccharomyces cerevisiae. Nearly 25,000 sequences representing almost every one of the 6,500 yeast open reading frames were synthesized. More than 98 percent of the CHAnGE cassettes resulted in mutations in the target genes at least 82 percent of the time, demonstrating a high editing efficiency. The technology proved to be effective for the introduction of both small deletions and single-base mutations, as well as for saturation mutagenesis of a single gene or domain. CHAnGE was successfully applied to engineer yeast strains that are tolerant to furfural, indicating that it could be used to engineer industrially relevant eukaryotes to advance toward

This work was supported by the Office of Biological and Environmental Research within the Department of Energy’s Office of Science and the Carl R. Woese Institute for Genomic Biology at the University of Illinois at Urbana-Champaign.