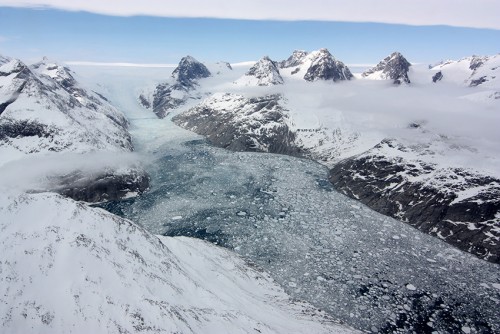 A glacier in eastern Greenland flows through a long and narrow valley carved by the movement of ice. Researchers have developed new approaches for assessing how ice sheet changes affect sea level.

Newswise — Climate models are not yet able to include full models of the Greenland and Antarctic ice sheets and to dynamically simulate how ice sheet changes influence sea level. Early schemes failed to accurately account for both mass increase due to snowfall and mass loss due to snow melt. These increases and losses depend on ice sheet elevation and region. A new method that includes the effects of elevation and region was developed using a detailed regional model of the Greenland ice sheet.

The team used the new scheme in five ice sheet models and forced them with climate warming conditions taken from two different climate models. Including the elevation effects in the model increases the estimated sea-level rise by a small but significant amount (5% enhancement of melt by 2100 and 10% by 2200 for a climate warming scenario). By 2100, the choice of driving climate model conditions dominates the uncertainty, but by 2200, the uncertainty in the ice sheet model and the elevation scheme are larger.

Research from Edwards et al. 2014a was funded by the ice2sea programme from the European Union (EU) 7th Framework Programme (grant number 226375; ice2sea contribution number 120). Additional support provided by the Advanced Scientific Computing Research and Biological and Environmental Research programs within the U.S. Department of Energy’s Office of Science, along with the Center for Remote Sensing of Ice Sheets at the University of Kansas through National Science Foundation grant ANT-0424589.