Scientists synthesize what could be a low-cost, earth-abundant material that splits water to make hydrogen fuel. 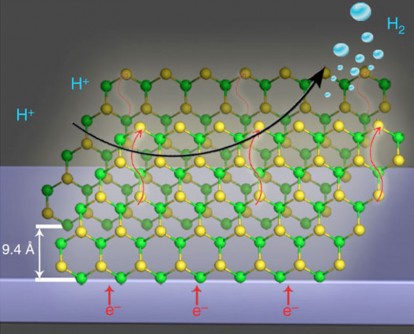 Storing energy from sunlight or wind inside the bonds of a hydrogen (H2) molecule would let intermittent renewable energy power fuel cells, providing electricity on demand. The scalable production of H2, created by splitting apart water (H2O), depends on how well the catalysts drive the reaction. Thus far, platinum catalysts are the best, but the metal’s scarcity and cost is problematic. A layered material shows great promise as a low-cost alternative. Scientists showed that a microwave synthesis technique helps create the new material, a nanostructured molybdenum disulfide, and gives the catalyst an improved ability to produce hydrogen.

Microwave-prepared molybdenum disulfide material has the potential to be an affordable alternative to the expensive platinum catalysts that are currently used. The performance exceeds that of MoS2 materials made via other synthetic methods.

The blueprint for the “hydrogen (H2) economy” is to convert energy from renewable sources, such as sunlight or wind, and store it as chemical energy in the bonds of the H2 molecule by splitting water electrochemically. The energy then can be released in fuel cells on demand. The scalable production of H2 from water depends significantly on the performance of the catalysts that are needed in the electrochemical reaction. Thus far, platinum catalysts are the best performers, but their high cost and scarcity pose limitations to their widespread adoption. A layered material containing molybdenum and sulfur (molybdenum disulfide, or MoS2) shows great promise as a low-cost alternative to the platinum-based electrocatalysts. Prior research has shown that the activity is primarily in sites on the edges of the sheets. Scientists at the Center for Nanoscale Materials have demonstrated that a microwave synthesis technique can help create nanostructured MoS2 catalysts with an improved ability to produce hydrogen. Theoretical calculations show the microwave-assisted strategy works partially through a change in the interaction between the hydrogen and MoS2 edge sites when the space between individual layers of MoS2 nanosheets is increased. The increase in space also exposes a larger fraction of reactive sites along the edges of these surfaces where hydrogen can be produced. The performance of the microwave-created MoS2 nanostructured material is among the best of current MoS2 catalysts, requiring only 0.1 V of extra voltage, compared to platinum, for the beginning of hydrogen evolution. Furthermore, the microwave method is more energy efficient than thermal synthesis methods, and it offers the possibility of designing tailored MoS2 catalysts through precise control of the interlayer distance.