Supported by a NSF and DOE grant, a trial of the unit holds promise of big advance for those who rely on life-saving equipment 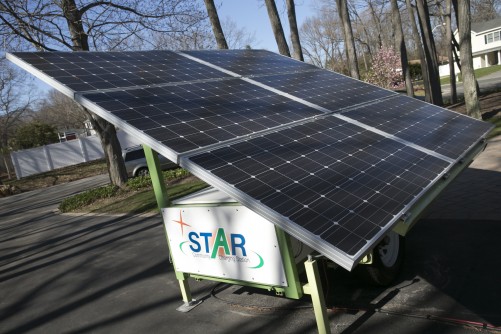 Newswise — STONY BROOK, N.Y., September 24, 2014 – Brooke Ellison draws her own power from will, but the ventilator that keeps her alive requires uninterrupted electricity. Dr. Ellison, Director of Education and Ethics at Stony Brook University’s Stem Cell Research Facility and Associate Director of the Center for Community Engagement and Leadership Development, is allowing scientists to field-test, at her home, the Nextek Power Systems STAR, a mobile solar generator with battery storage. The testing focuses on potential equipment changes needed to secure FDA approval as a medical-grade, uninterrupted, clean-energy power resource for emergency situations like Superstorm Sandy or other disastrous events when power outages are rampant.

Stony Brook is teaming with Dynamic Supplier Alignment, Inc. (DSA)—under a National Science Foundation and Department of Energy grant—to conduct the trial at Dr. Ellison’s home. The team is led by Principal Investigator Dr. Miriam Rafailovich, Distinguished Professor in the Department of Materials Science, and Wayne Gutschow, Vice President of Engineering for Nextek Power Systems. With the help of colleagues at the SBU Advanced Energy Research & Technology Center (AERTC) and SBU engineering students, the group will test the device to identify the minimum amount of storage needed to sustain the home’s critical loads during periods when the grid, conventional fossil-fuel generator, and solar power are not available.

“People who depend on mechanical ventilators—breathing machines—for survival are severely impacted by prolonged power outages,” says Dr. Ellison, who is paralyzed from the neck down from a childhood accident. “Vent-dependent individuals rely on power for their every breath. Technologies like this will have a direct impact on their safety and survival,” adds Dr. Ellison, who also cofounded the Stony Brook University VENTure think tank, an initiative in which SBU researchers and faculty volunteer time to work on projects and develop ideas for ventilator users.

The STAR project began with the 2013 SBU Garcia Summer Research Scholars Program. Research participants included Weida Zhang, a senior chemical and molecular engineering student at Stony Brook, and Alex Tang, a senior at Interlake High School in Bellevue, WA—who was inspired after a Dr. Ellison lecture about the experience of people on life-support systems during Hurricane Sandy.

When the storm made landfall on Long Island in 2012, some 90% of Long Island Power Authority customers lost power at some point in time. For those relying on home-use medical devices, especially life-sustaining equipment, the issue of a backup power source for use during emergencies became a life-threatening vulnerability. This was compounded by the likelihood of equipment failure—with fuel generators operating continuously over long periods of time—and the fuel shortages that occurred in the aftermath of the hurricane’s havoc. The issue seemed to “sneak up” on emergency officials, as better medical treatments and healthcare technologies have helped more people avoid hospitals and institutional settings and remain in their homes.

The idea to test a back-up sustainable energy source for individuals who rely on life-saving equipment took hold. Dr. Rafailovich and colleagues thought the opportunity to work with Dr. Ellison with her home as a “living laboratory” would be a major step to bring such a technology and device to fruition. The project has become one that drives home the interplay between scientific research, industry, education, engineering, and the ability to make a difference in people’s lives.

“It’s a pleasure to participate in a venture that brings laboratory research into the home with the help of industrial developers,” says Dr. Rafailovich. Adds SBU student researcher Zhang, “Having an opportunity to work with a company on a project with real-world applications is something many students seek but never get.”

About the STAR unit and the field testThe STAR unit is comprised of six solar panels, two sets of four absorbed glass mat (AGM) batteries, a wattmeter, a Pure Sine inverter, a solar charge controller, and a photometer, assembled into a mobile trailer unit. It is designed to integrate multiple power sources, with smart-sensing electronics to detect grid status and the power available from a distributed network of sources. It will provide continuous charging to an Uninterrupted Power Supply (UPS) that networks into the household grid power and supports critical life-support systems in the home.

The field test will hook up the inverter to the targeted loads. The inverter is configured to accept power from a grid source; this allows the unit to charge the batteries when there is no sun. When the grid fails, the circuit will be supported by solar and batteries. If neither solar, battery, or grid is available, a backup fossil-fuel generator will power the house and recharge the batteries. Data logging during the field test will record performance and the viability of the setup.

The STAR was developed by Nextek and is a second generation system with initial development funds for the first generation system provided by the Institute of Electrical and Electronics Engineers (IEEE) under the IEEE Community Solutions Initiative (CSI) —with SBU students providing assistance through New York State’s Strategic Partnership for Industrial Resurgence (SPIR)—as part of the Long Island DSA Clean Technology Commercialization and Market Acceleration Initiative. DSA fosters public and private collaboration to accelerate the commercialization of products and services, and builds regional supply chain networks to deliver clean and sustainability technology and processes. The STAR device is manufactured on Long Island by Vision Quest Lighting, Inc. and the electrical hook-up for STAR, at the Ellison home, was done by Soundview Electrical, Inc.