This video describes how the Linac Coherent Light Source, an X-ray free-electron laser at SLAC National Accelerator Laboratory, provided the first direct measurements of how a ring-shaped gas molecule unravels in the millionths of a billionth of a second after it is split open by light. The measurements were compiled in sequence to form the basis for computer animations showing molecular motion. 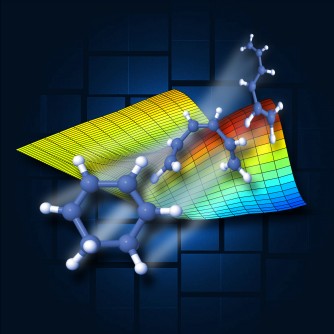 This illustration shows shape changes that occur in quadrillionths-of-a-second intervals in a ring-shaped molecule that was broken open by light. The molecular motion was measured using SLAC's Linac Coherent Light Source X-ray laser. The colored chart shows a theoretical model of molecular changes that syncs well with the actual results. The squares in the background represent panels in an LCLS X-ray detector.

Newswise — Scientists for the first time tracked ultrafast structural changes, captured in quadrillionths-of-a-second steps, as ring-shaped gas molecules burst open and unraveled. Ring-shaped molecules are abundant in biochemistry and also form the basis for many drug compounds. The study points the way to a wide range of real-time X-ray studies of gas-based chemical reactions that are vital to biological processes.

Researchers working at the Department of Energy’s SLAC National Accelerator Laboratory compiled the full sequence of steps in this basic ring-opening reaction into computerized animations that provide a “molecular movie” of the structural changes.

Conducted at SLAC’s Linac Coherent Light Source, a DOE Office of Science User Facility, the pioneering study marks an important milestone in precisely tracking how gas-phase molecules transform during chemical reactions on the scale of femtoseconds. A femtosecond is a millionth of a billionth of a second.

“This fulfills a promise of LCLS: Before your eyes, a chemical reaction is occurring that has never been seen before in this way,” said Mike Minitti, a SLAC scientist who led the experiment in collaboration with Peter Weber at Brown University. The results are featured in the June 22 edition of Physical Review Letters.

“LCLS is a game-changer in giving us the ability to probe this and other reactions in record-fast timescales,” Minitti said, "down to the motion of individual atoms." The same method can be used to study more complex molecules and chemistry.

The free-floating molecules in a gas, when studied with the uniquely bright X-rays at LCLS, can provide a very clear view of structural changes because gas molecules are less likely to be tangled up with one another or otherwise obstructed, he added. “Until now, learning anything meaningful about such rapid molecular changes in a gas using other X-ray sources was very limited, at best.”

New Views of Chemistry in ActionThe study focused on the gas form of 1,3-cyclohexadiene (CHD), a small, ring-shaped organic molecule derived from pine oil. Ring-shaped molecules play key roles in many biological and chemical processes that are driven by the formation and breaking of chemical bonds. The experiment tracked how the ringed molecule unfurls after a bond between two of its atoms is broken, transforming into a nearly linear molecule called hexatriene.

"There had been a long-standing question of how this molecule actually opens up," Minitti said. “The atoms can take different paths and directions. Tracking this ultimately shows how chemical reactions are truly progressing, and will likely lead to improvements in theories and models.”

The Making of a Molecular MovieIn the experiment, researchers excited CHD vapor with ultrafast ultraviolet laser pulses to begin the ring-opening reaction. Then they fired LCLS X-ray laser pulses at different time intervals to measure how the molecules changed their shape.

Researchers compiled and sorted over 100,000 strobe-like measurements of scattered X-rays. Then, they matched these measurements to computer simulations that show the most likely ways the molecule unravels in the first 200 quadrillionths of a second after it opens. The simulations, performed by team member Adam Kirrander at the University of Edinburgh, show the changing motion and position of its atoms.

Each interval in the animations represents 25 quadrillionths of a second ­-- about 1.3 trillion times faster than the typical 30-frames-per-second rate used to display TV shows.

“It is a remarkable achievement to watch molecular motions with such incredible time resolution,” Weber said.

A gas sample was considered ideal for this study because interference from any neighboring CHD molecules would be minimized, making it easier to identify and track the transformation of individual molecules. The LCLS X-ray pulses were like cue balls in a game of billiards, scattering off the electrons of the molecules and onto a position-sensitive detector that projected the locations of the atoms within the molecules.

A Successful Test Case for More Complex Studies“This study can serve as a benchmark and springboard for larger molecules that can help us explore and understand even more complex and important chemistry,” Minitti said.

Additional contributors included scientists at Brown and Stanford universities in the U.S. and the University of Edinburgh in the U.K. The work was supported by the DOE Office of Basic Energy Sciences.