Atomic-scale details of electron distribution reveal a novel mechanism for current to flow without energy loss. 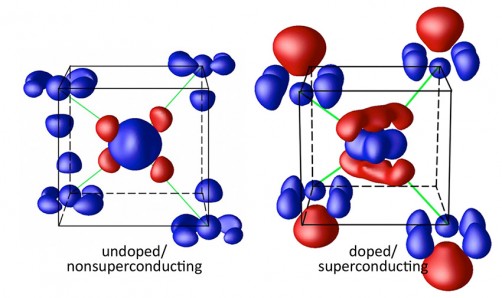 Electron density distribution (indicated by both the blue and red, as areas of deficiency and excess of electrons, respectively) in barium iron arsenide for undoped/nonsuperconducting and doped/superconducting alloys. There is a remarkable increase in charge distribution around iron (Fe) and arsenic (As) atoms in the superconducting material.

Newswise — Electric current flows without any resistance in a superconducting state thanks to a surprising redistribution of bonding electrons and the associated electronic and atomic behavior after substitution of some cobalt atoms for iron in barium iron arsenide.

This discovery of substitution-induced charge redistribution demonstrates the prominent role of bonding (and the associated electron fluctuations) in the emergence of superconductivity in iron-based alloys. It suggests a new route for finding higher performance superconductors through engineering and optimization of the electron density among the atoms in the material.

The flow of current in ordinary metals and other materials that conduct electricity is composed of electrons; however, the charge carriers are scattered when they conduct electricity, resulting in dissipation and energy loss, typically in the form of heat. In a superconductor, the electrons form into pairs that allow them to move through the material without resistance, eliminating the energy lost and thus increasing the efficient use of electricity. The challenge in creating such electron pairs is overcoming the natural tendency for electrons to repel each other. One solution is to utilize electronic polarizability that can yield an attractive interaction between electrons, thus allowing pair formation and the potential for loss-free current flow. Such a mechanism was proposed almost five decades ago, but it was never experimentally verified. Using electron diffraction with subatomic precision, scientists at Brookhaven National Laboratory have mapped out the redistribution of orbital electrons in barium iron arsenide, with and without cobalt substitution. The results reveal a remarkable increase in charge distribution around the iron and arsenic atoms as cobalt is incorporated into the material. Electron energy loss spectroscopy was carried out to determine the charge carrier-injection effect of cobalt substitution, while density functional theory was used to model electronic and atomic behavior. The induced charge redistribution around the iron and arsenic atoms after cobalt substitution suggests that the strongly coupled bond-electron fluctuation and charge separation may provide a new mechanism for high-temperature superconductivity. These results may guide the design of new superconductors.