Teamwork provides insight into complicated cloud processes that are important to potential environmental changes in the Arctic. 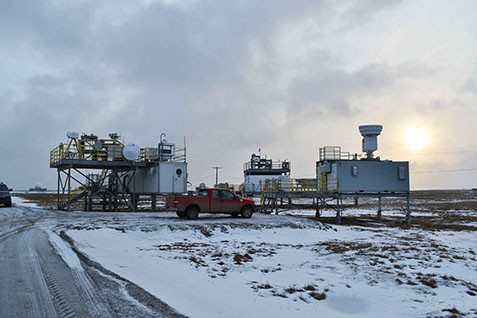 Newswise — The Arctic has changed at a faster rate than the rest of the planet. Clouds impact the surface energy budget and, thus, the melting or growth of land- and ocean-based ice. Many Arctic clouds are “mixed phase,” consisting of both ice and liquid particles simultaneously. Correctly predicting the partitioning of mass and transitions between these two phases is vital for understanding cloud impacts on Arctic climate. Why? Because ice particles and liquid droplets scatter and absorb solar and infrared energy in substantially different ways. A team found that the large-scale motion of air masses that have different aerosol concentrations and humidity is a major influence on the clouds’ phase. Also important were smaller-scale processes that influenced how long an ice particle stayed lofted in the cloud.

Experts came together and determined the key processes that control the partitioning of ice and liquid particles in Arctic clouds. The study specifically looked at the interplay between large- and local-scale processes to identify which small-scale microphysical processes are most important for global models to capture to better simulate the correct cloud phase in models. The study also identified that better observations of key aerosol parameters are desirable to better understand how aerosol-cloud interactions drive transitions in cloud phase. The results of the study offer insights to better represent Arctic clouds in numerical weather and earth system models.

Many Arctic clouds are mixed phase. Correctly predicting the partitioning of mass and transitions between these two phases is vital for understanding cloud impacts on Arctic climate because ice particles and liquid droplets impact atmospheric radiative transfer in substantially different ways. The team chose to focus on a persistent stratiform mixed-phase cloud observed at DOE’s Atmospheric Radiation Measurement (ARM) site in Barrow, Alaska, on March 11-12, 2013. This case is of particular interest because substantial temporal variability in the liquid-cloud layer and associated ice precipitation was observed during the cloud’s 37-hour duration.

The team used an extensive suite of ground-based remote-sensing instruments, including lidar and multifrequency vertically pointing and scanning radars operated at the ARM North Slope of Alaska atmospheric observatory in Barrow, combined with information on aerosol light scattering and absorption from National Oceanic and Atmospheric Administration instruments. To provide large-scale context for the case study and to examine important processes in more detail, multiple model approaches were employed. Limited area model simulations are used to identify processes that cause the descent of the cloud layer as well as the role of surface and large-scale forcing in the observed precipitation and phase partitioning transitions. Short-term forecasts from the Monitoring Atmospheric Composition and Climate (MACC) model are used to gain a wider perspective on aerosol transport at and around Barrow during the case study period, and help understand to what degree locally observed shifts in aerosol amount and type might be attributed to advection versus local processing.

Observational and modeling resources were brought together to understand the processes that control the cloud-phase partitioning and its transition in time. Evidence suggests that three main factors contributed to the abrupt change in phase partitioning for this case study:

The team found that the simulated ice water path was higher during times of strong updrafts that dominated during the early part of the case study. After the transition, updrafts weakened and ice crystals fell more quickly from the cloud system. The team found that the radiative shielding of a cirrus cloud on March 12 and the influence of the solar cycle were of minor importance for turbulence modulation in the mixed-phase cloud, and thus likely did not play key roles in the transition. A lack of observations of aerosol properties, including ice nuclei concentrations and vertical profiles of aerosol particle concentrations and size, poses a large challenge for understanding phase transitions. Additionally, this case study suggests that the interplay of aerosol-induced cloud microphysical properties with cloud dynamic and thermodynamic processes also may be critically important.