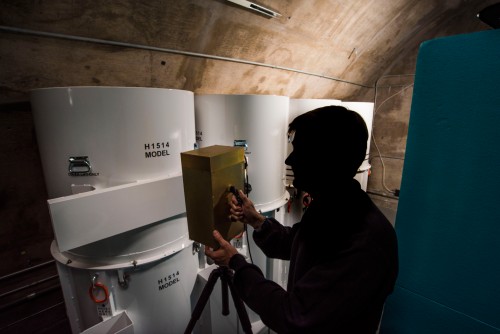 New START, or the New Strategic Arms Reduction Treaty, is a treaty between the United States and Russia that, among other limits, reduces the deployed nuclear warheads on both sides to 1,550 by Feb. 5. These limits will be maintained for as long as the treaty remains in force. The treaty includes regular on-site inspections of warheads and delivery systems. These inspections require measurements of objects declared non-nuclear to confirm that they are non-nuclear. Specific neutron-detecting equipment is defined in the treaty for this confirmation.

The first generation of this equipment was designed by Sandia in the late ’80s. It was originally developed for the Intermediate-Range Nuclear Forces Treaty to discriminate between intermediate-range missiles that were prohibited by the treaty and strategic-range missiles that were not prohibited. The first generation equipment was later approved for START and New START inspections, where the purpose was different but the measurements were the same.

The latest version of the radiation detection equipment is lighter, more rugged and designed to be more sustainable into the future than the original generation of equipment. Just imagine trying to maintain a 30-year-old Walkman in a smartphone world.

“It was getting to the point where the team was calling up retired vendors to see if they still had spare parts to repair the old equipment. That wasn’t a viable long-term solution,” said Dianna Blair, senior manager for Sandia’s nuclear security and nonproliferation group.

For equipment designed to last as long as the original equipment, it is important that it be rugged, robust and produce reliable results.

The equipment was subjected to numerous tests to ensure its robustness and reliability. Mary Clare Stoddard, manager for arms control technology development at Sandia, said, “Over the course of all the testing we did about 1,000 tests to stress the hardware. The carrying cases got a little thrashed but the hardware was fine.”

After the team of Sandia engineers and physicists designed equipment that would meet the needs of the treaty with modern parts, they invited some U.S. inspectors to evaluate the prototypes. One of their tests involved rolling a calibrated detector down a steep hill, while in its carrying case, and then verifying that the equipment still gave accurate results. It did.

“The ability of this equipment to make reliable, accurate measurements after being kicked down a hill is pretty amazing,” said Stoddard.

In addition to being able to take some hard use, the equipment doesn’t need to be calibrated as frequently and is lighter weight. The original set of equipment, containing two detectors and everything needed to set them up and operate them, weighed about 200 pounds and fit in four cases. The new equipment weighs 120 pounds and fits in three cases with wheels. Wheels aren’t helpful all the time, but on smooth surfaces they can be quite a boon.

“The Sandia team’s balance of technical excellence with pragmatic field-oriented engineering was key to coming up with the right product,” said Carolyn Pura, a former Sandia employee who now works at the National Nuclear Security Administration supporting New START.

Before the new equipment was approved for on-site inspections, Pura and others were involved in lengthy discussions with Russia, our treaty partner. The Russians inspected the new equipment for 30 days as part of the treaty-defined process for approval.

The team fabricated and tested enough equipment to support New START inspections — fewer than 24 sets — made of a mixture of custom and commercially available parts. Though the equipment is essential for treaty inspections, it wouldn’t be profitable for a private company to specially design and produce so few systems, Stoddard added.

In addition to Sandia’s long history supporting nonproliferation and treaty verification efforts, the NNSA Office of Nuclear Verification, which funded the work, came to Sandia because of its nuclear weapons expertise. Stoddard said, “This is our mission. We understand how design affects the measurements so we can advise on how to use the equipment in the field.”