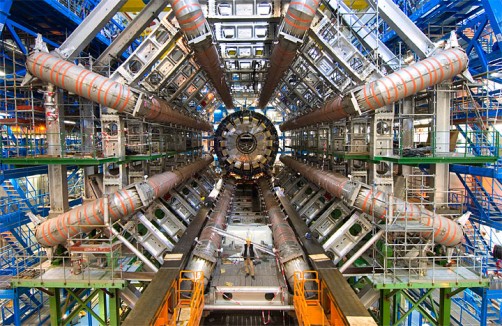 The ATLAS detector at the LHC (credit: CERN) 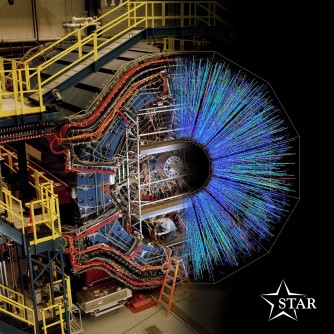 Click on the image to download a high-resolution version. The STAR detector and particle tracks from a heavy-ion collision at RHIC 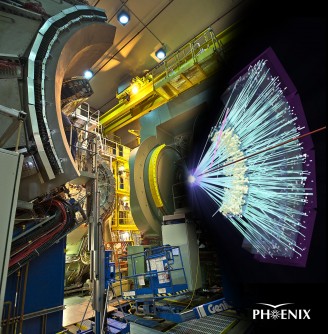 Scientists from the U.S. Department of Energy’s Brookhaven National Laboratory helped design and build key components of the LHC, and collaborate on research at the ATLAS detector, one of the LHC's two large high-energy physics experiments that, in 2012, announced the discovery of the Higgs boson. Brookhaven serves as the United States’ host laboratory for ATLAS collaborators across the nation, and handles a large amount of the data processing and distribution to ATLAS collaborators around the world.

Brookhaven physicists also participate in the LHC’s Heavy Ion Program at ATLAS, analyzing results from collisions of large nuclei such as lead, much like the gold-gold collisions at Brookhaven's own Relativistic Heavy Ion Collider (RHIC), but at a higher energy. RHIC and the LHC work in complementary ways to explore details of the quark-gluon plasma (QGP) that existed in the very early universe in an effort to understand its properties over a range of energies and how it evolved to form the visible matter of the universe today. The ICHEP meeting included presentations of heavy-ion data from both colliders.

Following last year's first glimpse of physics at an unprecedented energy level—colliding two beams of protons at an energy of 13 trillion electron volts (TeV)—the LHC experiments have now amassed significant amounts of data allowing them to "dive in and explore" the physics at this new energy frontier, according to a press release issued August 5 by the European Organization for Nuclear Research (CERN), home to the LHC.

"Thanks to the outstanding performances of the LHC, experiments have already recorded about 5 times more data in 2016 than in 2015, in just a few months of operations," the press release said.

In June, the LHC surpassed its design luminosity—a measure of the number of collisions in a given time interval, reaching a peak luminosity of about 1 billion collisions per second. This means that even the most rare interactions of subatomic particles at the highest effective energy can potentially occur and be detected to reveal new physics.

Physicists analyzing the large amounts of 13 TeV collision data have already confirmed the existence of the Higgs boson (first discovered in 2012 with a mass of 125 billion electron volts, GeV), and they will use the new data to conduct in-depth studies of this particle’s properties. They have also made new precision measurements looking for anomalous particle interactions at high mass, a very sensitive but indirect test for potential physics phenomena that cannot be explained by the existing description of subatomic particles and processes—a.k.a., the Standard Model of particle physics. They are also looking for signs that new particles predicted by Supersymmetry or other exotic theories “beyond” the Standard Model have been produced.

No compelling evidence for such particles has yet emerged, and one intriguing hint that caused considerable interest in the 2015 LHC data—a potential “bump” at 750 GeV—no longer appears in the much more significant 2016 data set, the CERN press release said.  The “bump” appears to be a statistical blip.

But there is still much new data to explore.

"We are really looking forward to analyzing in detail the wealth of new data at 13 TeV," said Hong Ma, chair of Brookhaven Lab’s Physics Department. “At the same time, we are also working on upgrading the ATLAS detector for operations at even higher luminosities beyond the next two years.”

Ma noted that the conference also included presentations of new results from research on neutrinos and in cosmology—additional areas of high-energy physics where Brookhaven scientists make important contributions.

Meanwhile, the four LHC experiments (ALICE, ATLAS, CMS, and LHCb) and the two large RHIC experiments (STAR and PHENIX) presented new results on the exploration of the quark-gluon plasma (QGP)—a state of matter that filled the early universe several millionths of a second after the Big Bang. Both RHIC and the LHC recreate the QGP by smashing together two beams of heavy ions (typically gold at RHIC and lead at the LHC), and explore the heavy ions by colliding them with protons (or deuterons) as well. In the gold-gold and lead-lead collisions, physicists have determined that the high temperatures and densities reached “melt” the protons and neutrons that make up the nuclei to release their constituent quarks and gluons. Careful study has revealed that, even at the higher LHC energy, the QGP flows with extremely low viscosity (relative to its entropy density)—as it does in the lower-energy, heavy-ion collisions at RHIC.

RHIC physicists first described the remarkable behavior of this “perfect” liquid in 2005, and the heavy-ion community has been exploring its properties ever since. Intriguingly, analysis of results from proton-lead and even proton-proton collisions, as reported by the LHC and RHIC experiments, have shown similar signatures of collective “flow” as found in the larger systems.  These studies complement other ways physicists are exploring the properties of the hot nuclear matter, including measurements of how high energy quarks lose energy as they traverse the QGP, and the disappearance of particles consisting of bound heavy quarks and antiquarks, many of which are being shown by the experiments at ICHEP.

"These new results demonstrate that the study of the quark-gluon plasma in heavy ion collisions has a wider relevance than originally expected,” said Jiangyong Jia, a scientist with a joint appointment at Brookhaven Lab and Stony Brook University, who participates in both the RHIC and LHC programs.

In addition to opening new frontiers in science, the new high-energy collisions at the LHC have also stretched the performance of the Worldwide LHC Computing Grid (WLCG) well beyond previous records, with more than 25 petabytes of data stored and processed since the beginning of the year. Brookhaven Lab’s RHIC and ATLAS Computing Facility serves as a Tier-1 computing facility for ATLAS in the U.S., providing a large portion of the overall computing resources for U.S. collaborators and serving as a central hub for storing, processing, and distributing ATLAS experimental data and data from RHIC’s experiments among scientists across the country and around the world. By developing innovative ways to keep up with the ever-expanding demands of handling LHC and RHIC data, computational scientists are continually improving on and expanding capabilities for the benefit of all data-intensive scientific endeavors. 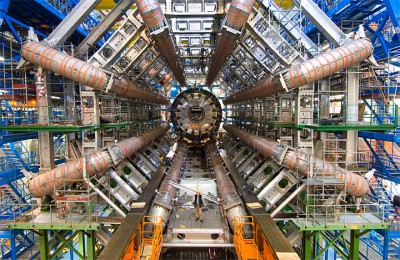 Caption: The ATLAS detector at the LHC (credit: CERN) 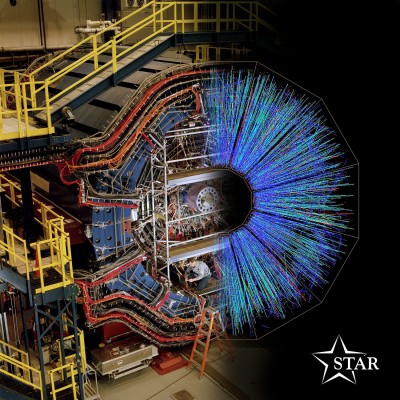 Caption: Click on the image to download a high-resolution version. The STAR detector and particle tracks from a heavy-ion collision at RHIC 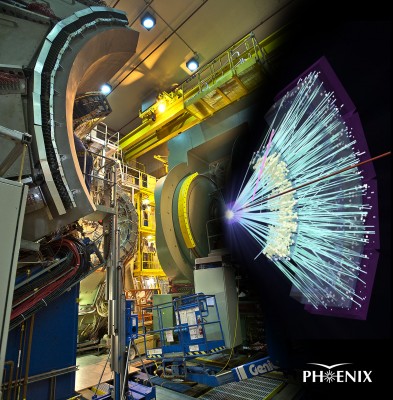 Caption: The PHENIX detector and particle tracks from a heavy-ion collision at RHIC