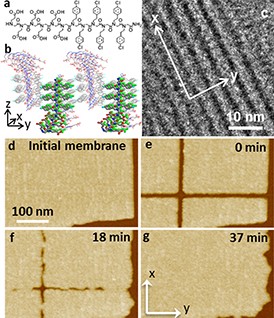 Separating one chemical from another is vital to manufacturing, water quality, and more. Unfortunately, the relatively thick nature and inefficiency of these separation techniques increases energy use. Scientists demonstrated that the films, thinner than a soap bubble’s “skin,” can self-repair after damage. The repair is similar to the self-repair seen in cells of living organisms. Notably, scientists can add patterns of chemically and structurally distinct groups of atoms into the membranes with near atomic-scale precision. The thin nature and ability to readily add discrete patterns make the films potentially attractive as templates for bottom-up assembly of nanostructured semiconductors, electronic circuits, and molecule-selective filters.

The team's detailed fundamental understanding of how these thin films self-repair and adjust to situations moves us closer to being able to design and create such films for industry. For example, scientists can use the self-repair and dynamic reconfiguration to synthesize membranes with a high surface area, meaning they can do a lot of work, and with tiny, distinct nanometer-sized pattern groups able to perform complementary functions. The results offer the potential to prevent energy-wasting reactions in fuel cells and in water filtration, chemical sensing, and catalytic materials for industry and energy production.

Two-dimensional (2D) materials are of increasing interest for use in filtration, sensing, and nanoelectronics because of their unique properties. The cell-membrane-like materials are composed of a special type of molecules called “peptoids.” Peptoids are a class of sequence-specific polymers, whose chemically different components are arranged in an ordered fashion. These polymers can self-assemble into 2D crystalline materials with properties that mimic those of lipid-based cell membranes.

Synthesized from modified versions of the amino acid glycine, the new film allows greater control over desired interactions by introducing specific side chains. Also, the film is far more thermally and chemically stable than those assembled from natural polypeptides. However, emulating the functionality of cell membranes requires much more than simply mimicking their structural characteristics. Emulating functionality creating multifunctional membranes able to reconfigure to precisely reposition functional components, co-assemble with other peptoids to introduce new functions, and self-repair.

Using in situ atomic force microscopy (AFM) to dissect these membrane-like materials and image their subsequent behavior, scientists at DOE’s Pacific Northwest National Laboratory showed that 2D peptoid films can indeed self-repair and reassemble on negatively and positively charged substrates and even in the absence of an underlying surface. The team “wrote” on the membranes with an AFM probe in water to create a series of peptoid-free linear gaps tens of nanometers in width and several nanometers to micrometers in length. The gaps ran both along and across the peptoid rows. The film initiated repair by introducing and assembling peptoid monomers at the newly created edges. As assembly proceeds, the two exposed edges of the gap advance toward one another until the gap is eliminated. The rate of repair depends on the direction in which the edges grow. Scientists can control the amount of repair by varying the amount of monomer added or by changing the solution pH. Repair using peptoid monomers with differing structure and chemistry demonstrated that the lipid-like design of these membranes could essentially be rewritten by inserting patterns of new distinct functional groups into them with nanometer-scale precision to produce multifunctional 2D materials by design.