Nidia Gallego: Carbon Scientist Is as Versatile as the Element She Studies 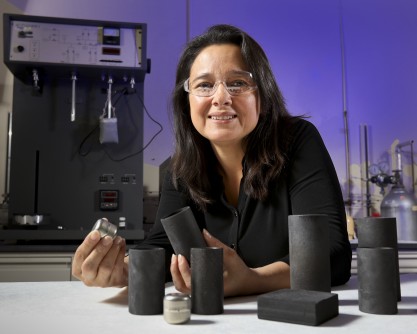 Newswise — Growing up in Colombia, Nidia Gallego was a diamond in the rough; she had no inkling that she would later shine as a scientist. Her father, a salesman, and mother, a homemaker, had not had the opportunity to complete high school themselves and urged their six children to stay in school. In 1993 Gallego became the first in her family to graduate from college.

Now at the Department of Energy’s Oak Ridge National Laboratory, Gallego develops carbon materials for energy technologies and space exploration. She investigates the physical and chemical properties of carbon in diverse forms—including fiber, composites and foam.

“Carbon is a single element that can be many things,” Gallego said. “It can be hard like diamond, soft like graphite or amorphous like activated carbon. Its material properties depend on how carbon atoms bond with each other.”

Building diverse connections is a characteristic Gallego has in common with the material she studies. As manager of the Strategic Partnerships Projects portfolio for ORNL’s Materials Science and Technology Division, she reaches out to companies and other government agencies to help them understand processes required for collaboration with a DOE national laboratory. The author of more than 50 scientific publications, Gallego is a Fellow of the American Carbon Society and frequently leads workshops at international scientific meetings. Through ORNL outreach committees, the former Fulbright Scholar connects with young professionals underrepresented in science. As chair of the Committee for Women she championed a “Take Your Child to Work Day” so children of employees could see where their parents work.

Polishing the diamond In high school, a physics teacher sparked Gallego’s interest in engineering, and her stellar test scores secured her acceptance to the largest public university in southeastern Colombia. At the Universidad del Valle, she majored in industrial engineering and took a materials engineering class taught by Ruby Gutierrez. “She was my first female mentor,” Gallego recalled. “She truly saw potential in me.”

Gallego worked her way through college as Gutierrez’s teaching assistant and wanted to pursue graduate studies in materials science and engineering, but no university in the region had a program in this discipline. After graduating, Gallego worked for the Universidad del Valle for a year, helping Gutierrez launch the university’s first program in this field.

Meanwhile, Gallego learned of a professor at Clemson University, Dan Edie, who was looking for help on a research project. Edie sponsored Gallego for a six-month visit to South Carolina, and the project went so well that Gallego started a master’s program at Clemson the following semester.

Edie encouraged Gallego to present her research at conferences. Just one year after entering the United States, she delivered her first presentation in English.

Gallego pushed herself as well, deciding to pursue her doctorate after completing her master’s degree. She explored carbon fibers for her dissertation.

To balance her academics, Gallego joined a martial arts club. There she met John Keith, a landscape architecture student with several black belts. Martial arts morphed into marital arts, as the two wed in 1998. Today they have two daughters—a 9 year old who likes science and swimming, and a 10 year old who prefers books and ballet.

Later, Gallego performed studies to support shifting the transportation fleet away from petroleum and toward hydrogen fuel. To improve storage of hydrogen, she aimed to increase the affinity of carbon adsorbents for hydrogen gas. Gallego and her team synthesized, characterized and modeled activated carbons—promising for storing hydrogen for fuel cells that produce energy and supercapacitors that store energy.

Whether innovating with coworkers or enjoying time with family and friends, Gallego treasures her personal bonds. They are diverse like carbon’s and have formed facets of her life from motherhood to mentorship. Having shaped her from humble beginnings, they continue to support her as she shines in her career.