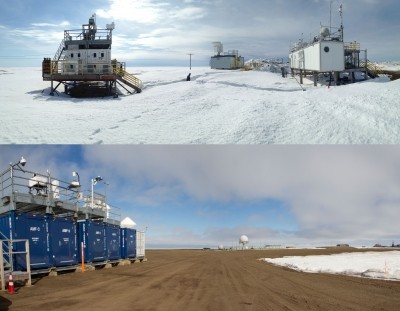 Airborne measurements taken during the ARM-ACME V campaign from June 1 to September 15 will include samples from as high as 20,000 feet to verify ground measurement readings over ARM facilities such as in Barrow (top) and Oliktok Point (bottom).

Newswise — A group of scientists from the Atmospheric Measurement Research (ARM) Climate Research Facility won’t be looking for gold or oil this summer as they crisscross Alaska’s North Slope in an airplane. Instead, the ARM Airborne Carbon Measurements V (ARM-ACME V) team—led by Sebastien Biraud from U.S. Department of Energy’s (DOE) Lawrence Berkeley National Laboratory—will run an aerial campaign from June 1 to September 15, measuring trace gas concentrations, aerosols, and cloud properties to find out why current climate models underestimate how rapidly the Arctic is getting warmer.

Since arctic clouds are known to exert a significant influence on atmospheric radiation and may play a role in observed arctic warming, the ARM-ACME V campaign will also address populations of liquid droplets and ice crystals to help characterize the properties of cloud layers. Measuring aerosol concentration and radiation will help scientists examine how clouds and aerosols interact with each other and with different layers of arctic air.

Verifying Ground-site DataWhen passing over established ground sites, such as the two ARM sites at Oliktok Point and Barrow—the northernmost point in the United States—the G-1 will fly a spiral pattern up to a maximum of 10,000 or 20,000 feet, depending upon the strength of vertical mixing of gases. The data collected will be used to help put ground measurements being taken at these sites into a regional context. Other ground sites being covered include: the National Oceanic and Atmospheric Administration Earth System Research Laboratory at Barrow; the Long Term Ecological Research site at Toolik Lake; and two San Diego University sites at Atqasuk and Ivotuk.

The G-1 will follow a fourth flight path north, above the Arctic Ocean between Oliktok Point and Prudhoe Bay, alternately climbing and descending between 300 and 3,000 feet and spiraling up to 20,000 feet at the 75th parallel before returning. Such airborne observations are expected to help scientists accomplish a number of objectives that will enhance their understanding of Earth’s weather patterns in hopes of reducing the uncertainty of current global and regional climate simulations and projections.

The ARM-ACME V campaign flight patterns and instrumentation are designed to collect a unique data set of trace-gas concentrations and atmospheric properties, according to Beat Schmid, Technical Director of the AAF at the Pacific Northwest National Laboratory.

"I believe our trace carbon-cycle gas observations are very accurate," he explains. "The data will be very detailed. I hope this plan will complement the work of other groups or agencies and add to our understanding of the carbon cycle in this sensitive region."

Improving Estimates for Emission SourcesBy characterizing atmospheric gas mixing ratios (volume of gas per volume of air) across the North Slope, scientists hope to improve the estimates of the volume of gases like carbon dioxide and methane being emitted from biological sources such as Alaska’s permafrost layer which stores large amounts of carbon. Permafrost is thawing at an accelerated pace due to rising air temperature and this degradation releases carbon dioxide and methane—two greenhouse gases that affect the amount of radiant energy that can reach or leave the Earth. Scientists will also use soot spectroscopy observations to fine-tune their understanding of how heat-producing activities, such as biomass burning and oil and gas production, contribute to Arctic warming.

"Warming has two effects," according to Margaret Torn, co-principal investigator for the ARM-ACME V campaign. "As arctic tundra thaws, organic matter decomposes, releasing carbon dioxide and methane, two greenhouse gases. At the same time, the warming trend has a greening effect on Alaska that you can see from space. The additional photosynthesis occurring as a result of this greening takes carbon dioxide out of the atmosphere. We want to determine when one effect is more important than the other—and why."

"These flights will also be looking at surface properties like albedo, which is the amount of solar radiation reflected by the Earth," Torn added. "When solar energy is reflected back into space, it reduces the amount of energy that is available to influence atmospheric convection and gas mixing. That affects the weather."The ARM-ACME V campaign will also collect more detailed data on the distribution of aerosols that scientists can use to test the accuracy of climate simulation models. One goal is to learn more about the roles played by black and brown carbon in changing the balance between incoming energy from the sun and outgoing energy from the earth.

The G-1 research aircraft will be based at the airport in Deadhorse, Alaska, just outside Prudhoe Bay. During the 15-week campaign, 16 team members will rotate in and out of Alaska in shifts of five for no longer than three weeks at a time. The team will make two or three four-hour flights per week, for a campaign total of 140 hours of observations.

"This is the leanest [staffed] G-1 deployment we have ever done!" shared Schmid.ARM researchers have been taking airborne carbon measurements for a number of years that have contributed to understanding carbon exchange processes and how carbon dioxide and associated water and energy fluxes influence the amount of sunlight that is absorbed by the earth and how much energy is radiated back to space, as well convective processes and carbon dioxide concentrations over the ARM region. ARM-ACME campaigns have also focused on how greenhouse gases are transported on continental scales.

"Previous ARM-ACME campaigns over the Southern Great Plains documented greenhouse gases near the surface of the Earth that tell us about how land use, fracking and the ecosystem influence production of the gases," Torn concluded. "We also flew [measured] higher in the atmosphere, and those higher elevation measurements tell us how greenhouse gas concentrations are changing over a larger region."