Researchers find that fungal spores are most abundant during initial growth, while bacteria predominate during flowering and fruit development. 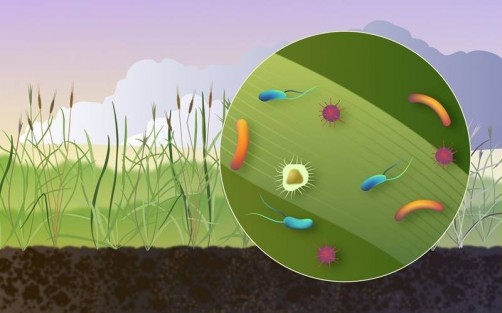 The aboveground parts of plants, mainly stems and leaves, are among the most prevalent microbial habitats on Earth. The pollen, bacteria, viruses, algae, and cell debris they release can seed cloud and ice crystal formation in the atmosphere.

Living organisms release particles such as fungal spores, pollen, bacteria, viruses, algae, and cell debris. In the atmosphere, these particles can act as the nuclei for cloud droplets and ice crystals. These particles are released by the aboveground parts of plants, mainly stems and leaves. These parts of plants are among the most prevalent microbial habitats on Earth. However, scientists know little about how this microbiome changes throughout a plant’s life cycle. Now a multi-institutional team of researchers has reported the first characterization of biological particles produced over the life cycle of Brachypodium distachyon, a wild but commonly used model grass.

Understanding differences in the type and composition of biological particles released over the life cycle of a plant helps scientists understand plant systems. This includes more accurate and reliable insights on the structural, functional, and biochemical properties of plant systems, and the interactions between plants and their microbial communities. In addition, this study provides insights on the emission of particles from the biosphere for use in Earth system models.

A team of scientists from Pacific Northwest National Laboratory, Purdue University, Lawrence Berkeley National Laboratory, and the University of California at Irvine characterized primary biological particles produced by the leaves and stems of the grass Brachypodium distachyon, a common model for biofuels" aria-label="energy">energy and food crops, throughout its life cycle. They collected particles at eight different developmental stages from leaf development to the last season of plant life. Then they analyzed particle morphology, elemental composition, and abundance of functional groups using various types of microspectroscopy platforms. They performed computer-controlled scanning electron microscopy with energy-dispersive X-ray and environmental scanning electron microscopy analyses at the Environmental Molecular Sciences Laboratory (EMSL), a Department of Energy (DOE) Office of Science user facility, as part of the facility's Molecular Bioimaging Integrated Research Platform.

In their analysis, the researchers distinguished spores, bacteria, plant fragments, and other types of biological particles in the plants' leaves and stems. Fungal spores were most abundant during the stage just before flowering, while bacteria were most abundant during the flowering and fruit development stages. By highlighting the type and abundance of microbial community composition of plant aboveground tissues, this study's outcomes could lead to a better and predictive understanding of various physiological and environmental factors that influence microbial interactions in these tissues. The results also point to the importance of continued characterization of biological particles from the phyllosphere to further understand the environmental implications.

This research was funded by the DOE Oﬃce of Science, BER program for the EMSL and Atmospheric System Research program; by a Laboratory Directed Research and Development program at Pacific Northwest National Laboratory for the iPASS, PREMIS, and Chemical Imaging Initiatives; and by the DOE Oﬃce of Science, Oﬃce of Basic Energy Sciences for beamtime at the Advanced Light Source at Lawrence Berkeley National Laboratory.