Measurements of the electromagnetic properties of radioactive antimony-129 provide unique insight into the nature of the proton-neutron interaction and nuclear shapes. 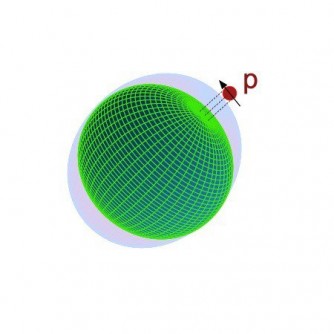 Schematic of a single proton (p) inducing deformation (grey) on an otherwise spherical “semi-magic” tin-128 core (green). The bulge is analogous to the moon inducing oceanic tidal bulges on the Earth.

Newswise — Atomic nuclei exhibit increased stability, called “shell structure,” when the number of protons or neutrons equals 2, 8, 20, 28, 50, 82, or 126. If both the proton and neutron numbers equal to one of these “magic” values, the nucleus is said to be “double magic.” Protons and neutrons in nuclei organize into pairs that naturally favor spherical shapes. However, deformed nuclear shapes can develop when the long-range part of the proton-neutron interaction overcomes the short-range pairing interaction. This causes collective (coordinated) motion of protons and neutrons produces deformed shapes.

This novel measurement involved antimony-129. This radioactive isotope has one proton added to a semi-magic tin-128 core. The measurement found that antimony-129 has an electromagnetic strength 40 percent larger than the tin-128 core. Two state-of-the-art calculations indicate that this large and unexpected increase in strength is due to coordinated interactions between protons and neutrons. The results indicate these interactions are key to driving atomic nuclei towards non-spherical shapes. The results also point to new directions for scientists who are exploring how protons and neutrons interact.

Researchers analyzing historical data from the Holifield Radioactive Ion Beam Facility at Oak Ridge National Laboratory found evidence of a beam of radioactive antimony-129 traveling at 8 percent of the speed of light. They measured scattering of the antimony-129 nuclei from a titanium target to determine its electromagnetic properties, which provide a measure of the collective motion and shape of the nucleus. The results show that antimony-129, a proton plus a semi-magic tin-128 core, has an electromagnetic strength that is 40 percent larger than that of the tin-128 spherical core. This is like a moon inducing unexpectedly large oceanic tidal bulges on a planet with a liquid surface. This large, unexpected enhancement is due to coordinated proton-neutron interactions and motion, where adding one proton to a spherical core near a double-shell closure has a pronounced and measurable effect. The nature of proton-neutron interactions is an ever-evolving topic, and studies using accelerated beams of short-lived radioactive nuclei have led to many surprises. This recent study used a novel technique of measuring electromagnetic properties of an exotic nucleus combined with state-of-the-art calculations to expose the behavior of proton-neutron interactions, paving the way for a more accurate understanding of these building blocks of nature.

This material is based on work supported by the Department of Energy Office of Science, Office of Nuclear Physics. The research used resources of the Holifield Radioactive Ion Beam Facility of Oak Ridge National Laboratory, a DOE Office of Science user facility. This research was also sponsored by the Australian Research Council.